Outlook: Can Normalization in a Non-Normal Market Persist? (Alfred Lee)

Can Normalization in a Non-Normal Market Persist?

Without question, equity markets around the world are off to a good start in 2012 with a general rotation out of defensive areas and into more cyclical oriented themes. More impressive is the market’s ability to shake off a number of negative headlines already seen in the new year. These include credit rating agency Standard & Poor’s (S&P) recent move to downgrade a number of Eurozone countries including France and following that up with the downgrade of the European Financial Stability Facility (EFSF). Though lower credit ratings typically results in higher borrowing costs when bonds are auctioned, yields of the downgraded European sovereign bonds barely rose after the news. Moreover, credit default swaps (CDS), or insurance against a default on sovereign bonds, have actually been trading at lower prices since the news of the downgrades. This suggests that the moves by S&P were already priced-in, as the downgrades were largely considered to be telegraphed to the market months ago. In addition, the European Central Bank’s (ECB) Long-Term Refinancing Operation (LTRO)1 and the co-ordinated moves by the six central banks in November to provide cheaper swap borrowing rates has largely removed the perception of tail-risk2 in the short term. Through the newly revised rules of the LTRO, the ECB allows banks to borrow funds for three years by posting collateral, to which eligibility requirements have been relaxed significantly. Thus, the perception of solvency of European banks have been significantly improved, despite a number French, Italian and more recently Spanish banks having been downgraded.

From a fundamental perspective, we have considered that most equity markets around the world to offer attractive valuations over the last three months. Though we have reduced our “overweight bonds” recommendation introduced last August to “slightly overweight” last month, we were still overly defensive in our allocation in January. While we remained largely favourable to U.S. equities throughout 2011, which in hindsight proved to be the right call, we have been waiting for momentum to return to Canadian stocks to avoid being caught in a value trap. The Dow Jones Industrial Average (Dow), our top broad equity market pick in 2011, showed a return of positive momentum in October, breaking out of its range-bound pattern and also recently registering a “golden-cross”3 pattern, early January. The S&P/TSX Composite Index (TSX), on the other hand, remained in a clear downtrend pattern since last March and has only recently broken out of that trend. In our equity allocation over the last year, we favoured more defensive oriented themes such as utilities, REITs and low volatility strategies. We continue to favour these themes as longer term core investments but given the strong market rally, we would use equity market pullbacks to tactically rotate some equity exposure to higher beta4 areas, as defensive names may lag over the next several months. 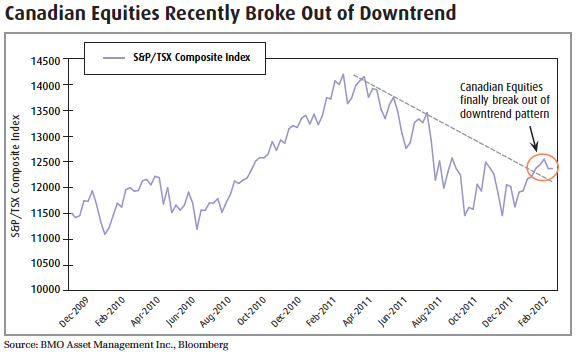 Last year, the U.S. Federal Reserve (“Fed”) announced they would pledge to keep record low interest rates until 2013. Several weeks ago, in a surprise move, the Fed extended its commitment to low rates to 2014, which was largely recognized as an overly aggressive move, particularly considering that U.S. economic data has been coming in better than expected in most cases. Nevertheless, the move showed that the Fed is willing to take significant measures to maintain a risk-rally and the market now believes that there is a higher likelihood for further quantitative easing should the improvement in economic data lose momentum. As a result, over the next several months we believe an equity market rally may be possible, despite risk assets looking very overbought over the short-term. From a fundamental perspective, global equity markets are attractive and short-term liquidity measures may lead to a multiple expansion in valuations. However, the many global macro-economic concerns that weighed on the market last year largely remain unresolved and any political responses questioned by the market could potentially cause a market sell-off. Sentiment indicators such as the
CBOE/S&P Implied Volatility Index (VIX) are currently below historical averages but are finally showed some reaction to negative news, several weeks ago. As a result, we recommend using pull backs and trailing stop-loss orders to reallocate to equity markets. Risk mitigation tools such as stop-loss orders are critical given margin debt levels remain excessive, which makes a deleveraging event possible should investor sentiment sour over the ongoing European sovereign debt saga.