A recession is two consecutive quarters of economic contraction. Historically, highly inverted yield curves like we have now are predictive of recessions. The 10 Year Treasury Bond interest rate has dropped from 4.3% at the peak to 3.5% currently, even as the Federal Reserve Board reinforces the idea that short rates will be taken above 5%. This has created very high short rates relative to longer-term rates reinforcing the recession predictions.

This raises two questions. First, has it paid historically to try to predict six-month stock market returns? In other words, can you benefit from fearing a recession? Second, are there simpler things for concerned investors to focus on to give them the ability to use the kind of five-year time frame that we prefer at Smead Capital Management?

To the first question, we always answer that it is fairly useless to try to predict the unpredictable. Nobody can predict short-term stock market returns (even though people never stop trying or reading the opinions of people who are paid to predict them). The other part of predicting a recession and altering your investments based on the prediction always leads us to ask folks this question. If your spouse was going to love you 4% less in the next year, would you divorce them? Most of us would be thrilled in a marriage with that slow of a decline in affection.

Therefore, since there is a very positive long-term bias to making money in common stocks, what are some reasons to stay the course despite the probability/possibility of a recession later this year? Also, how do the economic problems created by fighting against the economic difficulties of the COVID-19 pandemic affect which common stocks to own to get at the long-term benefit of equity ownership?

Those who are predicting a recession must deal with the emergence of the largest adult population group as the dominant necessity spenders in our society. The chart below shows that the population is topped by the 30–35-year-olds, followed closely by the 25–30-year-old group: 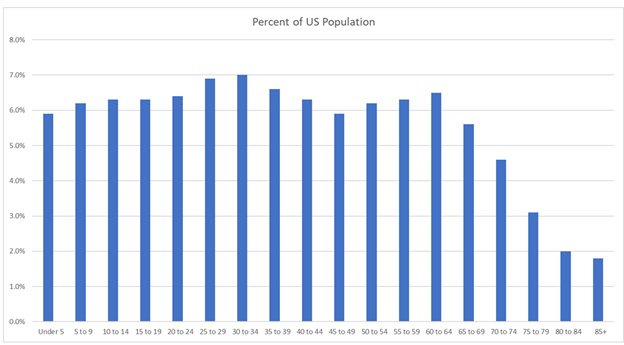 This is the stage of life where most of the household formation comes from in our nation and bodes extremely well for longer-term economic growth much like we had from 1964-1981. The toughest part of this for investors is to trust the millennial group because they have started the household formation process later in life than any prior generation.

Back then it was the baby boomers that were the pig going through the population python. In his Allen and Co. talk in the summer of 1999, Warren Buffett said that the economy grew 4.3% per year from 1964-1981 and the Dow Jones Industrial Average went nowhere during that stretch. If you want to imagine that the boomers were in some way a more virtuous group than millennials, watch Jenny in the movie, Forrest Gump, who represented how far down the wrong path many boomers went in their youth.

Besides demographic optimism, let’s be reminded that household balance sheets are historically strong and the household debt service ratio is historically very low. 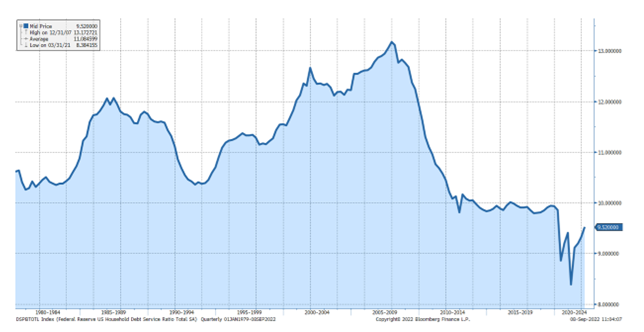 As we put two plus two together, it appears that rather than worrying about a recession when the long-term outlook for the economy is likely to be bright, we should instead think about how investors made money in the stock market back in 1964-1981. This was when Warren Buffett, Charlie Munger, John Templeton, Peter Lynch and John Neff made names for themselves as great stock pickers in a flat index environment!

The dynamics back then were as follows:

It is our view that stock picking in these circumstances could be rewarding in the same way it was in 1964-1981 and the S&P 500 Index could lead to stock market failure in this era.

This Missive and others are available at www.smeadcap.com

Inflation, China’s reopening will help drive markets in the Year of the Rabbit

byInvesco Canada
No comments
AdvisorAnalyst.com on TwitterTweets by @advisoranalyst