The Trump administration is starting to consider a replacement for US Federal Reserve Chair Janet Yellen after her term expires. This is only one potential leadership change in what could be a wave of turnover ahead for the institution.

With three open seats on the Fed’s Board of Governors and more turnover likely, there are many moving parts to the coming transition. But in the past, nominations for the board’s chair have been made several months before the current chair’s term expires. Based on this precedent, we expect the nomination in the next few months.

Several prominent economic and political figures have been mentioned as potential successors to Yellen, each with a perceived position on the policy spectrum (Display). It’s impossible to know whom the president will eventually choose—and a dark-horse candidate could certainly emerge. This list is by no means comprehensive, but it does cover several of the candidates whose names have been commonly mentioned as potential chairs starting in 2018. 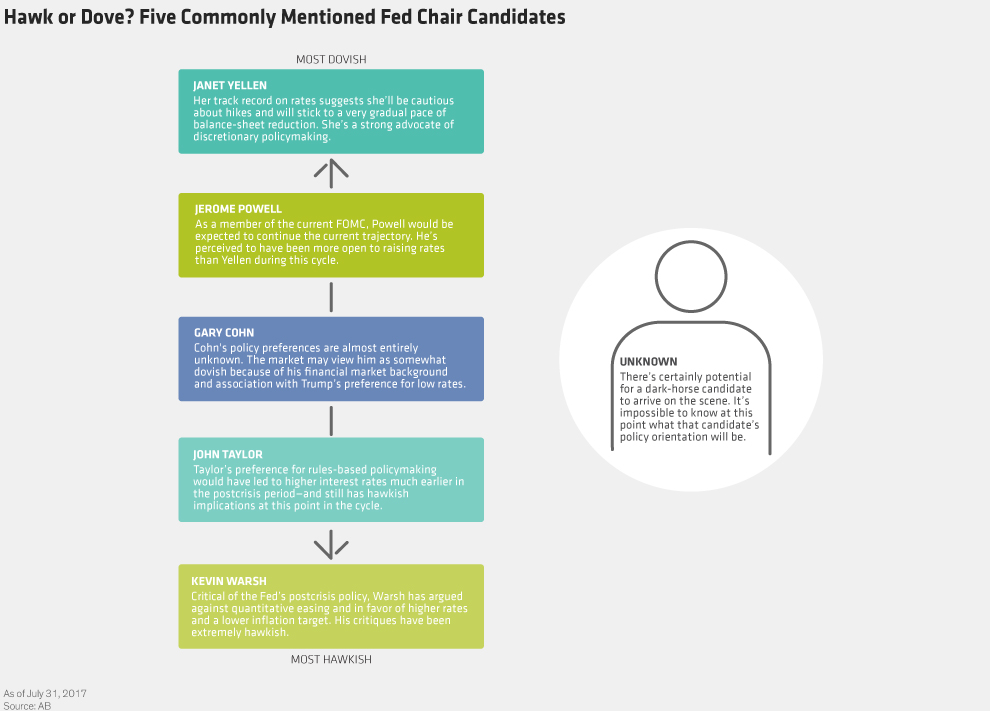 Janet Yellen. President Trump could simply choose to reappoint Yellen as chair, as has generally happened with past Fed chairs. This option might appeal to the president because the economy and the financial markets are both performing well, giving him incentive not to rock the boat. Trump was quite critical of the Yellen Fed during his campaign, but he has been much more positive in his assessment of her tenure since he assumed office. In fact, in an interview earlier this year, Trump indicated that she might still be reappointed. Yellen’s academic and policy credentials are unimpeachable, and financial markets would likely be happy with this choice: markets prize stability, and also view Yellen as dovish on interest rates.

Jerome Powell. A current governor, Powell would be a logical choice for chair if the president wants to preserve continuity but also wants to make his own nomination. Powell has background in both the Fed and the executive branch, including service as assistant secretary and undersecretary of the Treasury Department under President George H. W. Bush. Powell has served on the board since 2012, and he’s currently its only Republican, which may enhance his appeal to the president and ease his confirmation process.

Gary Cohn. News reports in July suggested that Cohn, currently director of the National Economic Council, both is leading the process to select the next Fed chair and is himself the leading candidate. He lacks Yellen’s academic gravitas, but he’s widely respected within financial markets for his stint as second in command at Goldman Sachs. Of course, his previous tenure at Goldman Sachs may make his confirmation process politically difficult, as could his lack of prior policymaking experience. Markets would likely take a positive view, though, largely because he would be viewed as likely to advocate less regulation of the financial sector, given his Goldman experience.

John Taylor. Taylor, a Stanford professor, has excellent academic credentials and is a well-respected thinker on monetary policy issues. In the past, he has espoused a preference for rules-based policymaking over the more discretionary style the Fed has historically favored. He developed and proposed the Taylor rule, often used as a basic guideline for assessing the setting of monetary policy. Taylor would be a very popular candidate with the Republican Party’s conservative wing: this group has consistently chafed at the Fed’s more improvisational style and willingness to use its balance sheet to support the economy. The impact of a Taylor candidacy on markets is uncertain. He is a heavyweight economist, but also the candidate with the most potential to make dramatic changes within the Fed. That sort of volatility could prove disruptive.

Kevin Warsh. As a Fed board member during the global financial crisis, Warsh earned praise for his work as liaison between the Fed and financial markets. Since leaving the board, he has been a vocal and public critic of the Fed’s efforts to support growth. He has a limited background in economics compared to most of the other candidates, and he isn’t perceived to be as much of a deep thinker on monetary policy issues. He is also the most partisan of the publicly discussed candidates. A Warsh appointment wouldn’t be welcomed within the walls of the Fed, where he’s viewed with skepticism due to his light academic and professional résumé relative to those of several other candidates, as well as to his public criticism of the Fed.

A Potential Wave of Turnover

Recent transitions between Fed chairs have generally taken place without disruption, but the potential turnover this time is much broader. Several members of the board have recently left—or may soon leave—the institution. There has also been significant turnover among the regional Fed presidents who serve on the Federal Open Market Committee (FOMC). By the end of 2018, it’s very possible, perhaps even likely, that the majority of FOMC members will have little experience in their roles.

And the stakes around this transition are particularly high. The Fed has become very important to financial markets over the course of the last decade—from QE1 through the taper tantrum and now during the transition to interest-rate hikes and toward balance-sheet normalization. If the new chair is a newcomer—not someone with significant institutional history—the degree of turnover will make his or her job that much more challenging. 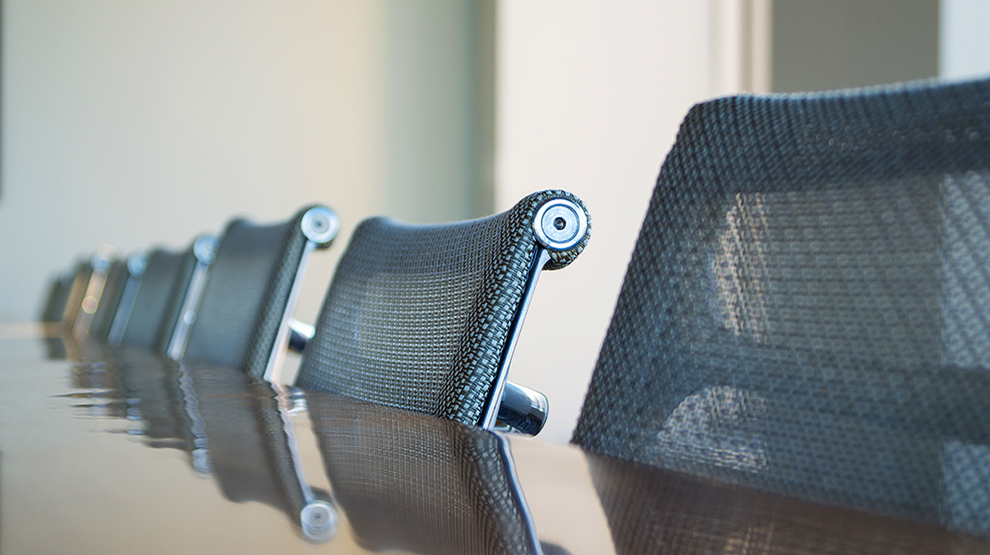 How to Invest in China’s New High-Tech Economy