On June 6th, several members of the Gulf Cooperation Council (GCC)1 announced a sweeping blockade of Qatar, also a member of the GCC. The GCC members enforcing the blockade, led by Saudi Arabia, issued a list of 13 demands which Qatar rejected.

Since the blockade was implemented, Qatar has managed to replenish basic foodstuffs that were initially stripped from store shelves as households rushed to hoard necessities. The emirate state has managed to fly in dairy cows from abroad which are now contentedly supplying milk from air conditioned barns in Qatar.

In the first part of this report, we will offer a short history of Qatar and examine its geopolitical imperatives. Next week, in Part II, we will analyze the events precipitating the blockade, the blockade itself, the GCC’s demands and the impact thus far on Qatar. We will examine how the situation has reached a stalemate and, as always, we will conclude with market ramifications.

A Short History of Qatar 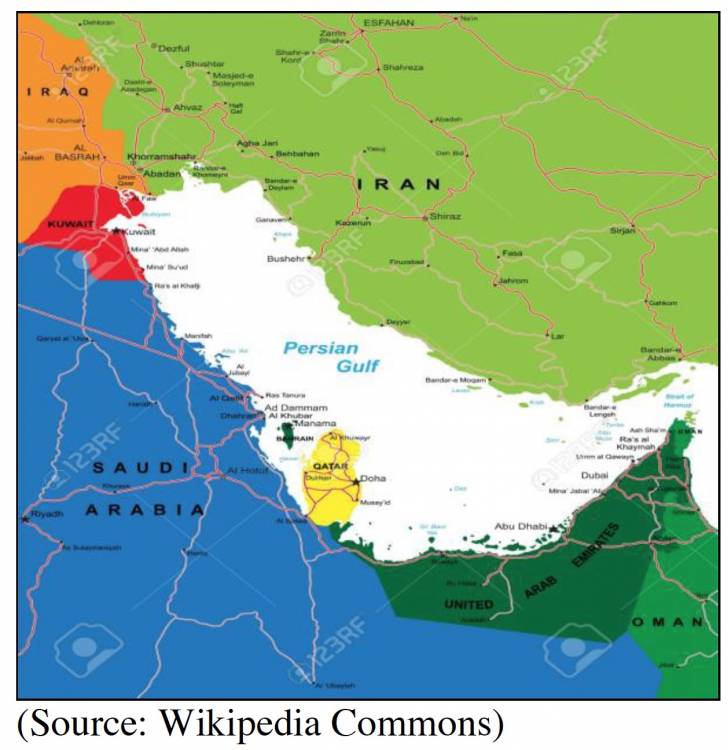 The area of modern Qatar was part of two early kingdoms of Saudi Arabia. The first Saudi kingdom lasted from 1744 through 1818. The forces of the Ottoman Empire overthrew this first kingdom which was ruled by Muhammad ibn Saud. The al Sauds rose again in 1824 and created the second Saudi kingdom. This kingdom lasted until 1891, when internal conflicts within the al Sauds led to its demise.

Al Saud control on the peninsula was rarely secure. The al Thani tribe was predominant, although this influence was contested by the al Khalifa family. Eventually, the al Thani won and the al Khalifa tribe moved to dominate Bahrain.

Although nominally part of the second Saudi kingdom, the al Thani on Qatar were mostly autonomous. Tribal leaders eventually submitted to Ottoman rule in 1871 to avoid dominance by the al Sauds. However, family leaders chaffed under Turkish rule and stopped paying tribute in 1892. The Ottomans sent troops to force compliance but the al Thani tribe successfully thwarted these efforts and prevented the empire from controlling the peninsula. From 1892 until 1916, Qatar was essentially autonomous. Both the Ottomans and the Saudis nominally considered the peninsula part of their respective holdings, but in reality, the al Thani tribe was independent.

In 1915, during WWI, the al Thani joined the British against the Ottoman Empire and participated in the latter’s defeat. Qatar became a British protectorate in 1916 and remained under nominal British control until the late 1960s. In 1968, Britain, which was struggling with the financial drain from the remaining parts of its empire, informed its protectorates in the Middle East that it was leaving the region.2 Qatar became independent in 1971.

2 British protectorates in the region were Bahrain, Kuwait, Qatar, the UAE and Oman.

3 As we noted last week, if King Salman abdicates soon, his son and current Crown Prince Mohammed bin Salman would be the youngest sovereign.

Since independence, Qatar has had four Emirs, all members of the al Thani family. The first two were deposed and the third abdicated to his fourth son, Tamin bin Hamad al Thani. At 37 years of age, he is currently the youngest sovereign in the world.3

Qatar is a valuable small state: The earlier map shows how the country juts into the Persian Gulf. Its location in this key waterway means anyone holding this territory can easily use it to project power into the Persian Gulf. Therefore, Qatar will always have regional powers trying to gain control of the peninsula for power projection. On the other hand, it allows the leadership to bargain with regional and more distant powers to protect the al Thani family from rivals. It’s no accident that the family has teamed up with outside powers since the 1800s to fend off designs from Saudi Arabia. Thus, by submitting to the Ottomans, the British and, as we will show below, the U.S., Qatar has been able to keep the Saudis at bay, avoiding being part of the current regime, the third Saudi Kingdom.

The U.S. currently has Central Command’s (CENTCOM) forward base at the Udeid Air Force Base in Qatar.4 Around 11k U.S. and allied personnel work out of that base. It was initially built as a secret facility in 1996. After the Saudis forced the U.S. to leave the Prince Salman AFB in 2002 due to criticism from Islamists in the kingdom, CENTCOM moved its facilities to Qatar. The presence of a large Western military contingent is a bit like having policemen frequent a diner—it makes anyone thinking about robbing the diner take pause.

4 Technically, this air base is a Qatari AFB as this stationing of U.S. forces isn’t said to be permanent. This is a distinction in name only. The Qatari Air Force only has about 100 personnel on the base.

It should be noted that Turkey has a small military base in Qatar as well. The GCC sees Turkey as a rival and thus the Turkish contingent is a further deterrent to potential Saudi encroachment. In the wake of current tensions, Turkey has suggested it may expand its facility in Qatar, much to the chagrin of the Saudis and the UAE. To reiterate, small states that are valuable need support from bigger nations. In general, the further away this support comes from, the more autonomy the local rulers can enjoy. Thus, Qatar could be protected by Saudi Arabia or Iran as well, but both nations would want the al Thani family to submit to their regional goals. The U.S., Turkey or Britain are less concerned with regional issues and thus are willing to allow the al Thani more freedom.

Circumstances that give Qatar economic freedom from Saudi Arabia: Because of the shared border, the UAE and Saudi Arabia supply about 12.4% of Qatar’s imports. Its largest single-nation import supplier is China (10%), with France second (9.3%). All of the GCC members are oil producers and four are official members of OPEC (Oman and Bahrain are not). Saudi Arabia dominates the OPEC cartel due to its outsized production levels, so its ability to affect oil prices gives it some degree of control over the GCC.

Thus, Saudi Arabia cannot really affect Qatar’s economy by threatening to drive down the price of crude oil. Although some LNG has its contracts priced to crude oil, increasingly, the global natural gas market is becoming independent of crude oil prices. Saudi Arabia, by affecting the price of oil, can generally influence the behavior of the other GCC members, but because Qatar’s primary export is less affected by the price of oil it has a high degree of economic independence from Saudi Arabia. 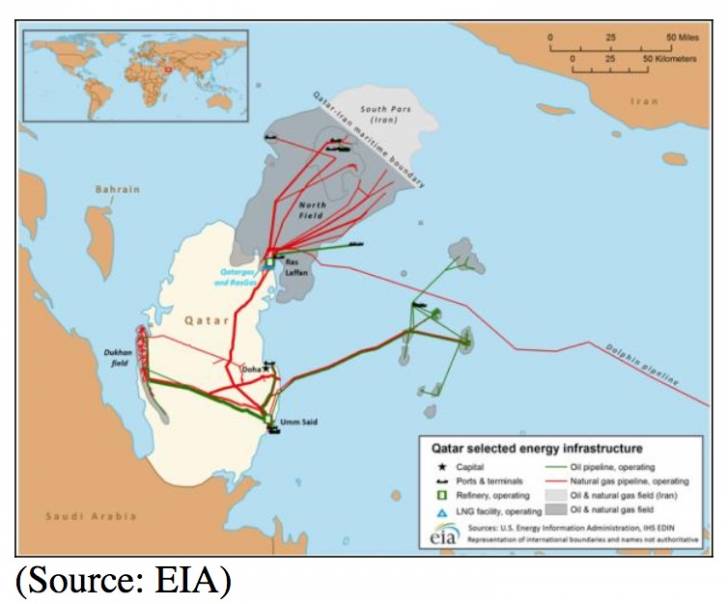 The massive offshore North Field is shared with Iran (which calls its part South Pars); the field is divided at the maritime border. Essentially, Iran and Qatar are business partners. Saudi Arabia and the UAE see Iran as an existential threat and thus it is troublesome to them that a member of the GCC has a working relationship with Iran.

Qatar’s demographics are more manageable relative to other GCC members: Qatar has around 300,000 citizens. The rest of its population of 2.5 mm is composed of expatriates. About 32% of its foreign population come from India. Roughly 80% of the native population is Sunni Muslim with the rest being mostly Shiite, although other sects are represented as well. Unlike Bahrain or Saudi Arabia, who have restive Shiite minorities, Qatar has been free from sectarian tensions. For the most part, the ruling family has fostered a religiously tolerant country. Other GCC nations tend to suppress their religious minorities, especially Shiites, viewing them as a threat. This difference does not sit well with some GCC members.

Because Qatar faces less sectarian pressure than other GCC members, it has a more free-wheeling media. Al Jazeera is a key example. Other GCC states have tightly controlled media; although the reporters for al Jazeera carefully avoid scrutiny of the al Thani family, for other nations it is an independent media source that isn’t under state control. And, because it is independent, it is often critical of the policies in other GCC nations.

The al Thani family has tended to support Islamist movements in the region. It is a supporter of the Muslim Brotherhood and its Palestinian offshoot, Hamas. The royal families of the other GCC states strongly oppose the idea of non-monarchy Islamist governments. The Muslim Brotherhood, which promises an alternative model of Islamist governance that would allow for democracy, could represent a significant threat to the GCC monarchies. The al Thani family doesn’t seem to view groups like the Muslim Brotherhood or Hamas as a threat. The Egyptian government and the Saudi Royal family beg to differ.

And so, the al Thani family has allowed a number of exiled leaders of the Muslim Brotherhood and the Taliban to reside in Qatar. In many cases, al Jazeera has given these exiles a platform to spread their ideas. It is no wonder the other GCC nations, especially Saudi Arabia and the UAE, view Qatar’s policies with disdain and want to undermine the peninsula nation’s independent streak.

Next week, we will complete our study of the Qatar situation by examining the events precipitating the blockade, the execution and terms of the blockade and the elements that appear to be creating a stalemate. We will conclude with potential market effects.

This report was prepared by Bill O’Grady of Confluence Investment Management LLC and reflects the current opinion of the author. It is based upon sources and data believed to be accurate and reliable. Opinions and forward looking statements expressed are subject to change without notice. This information does not constitute a solicitation or an offer to buy or sell any security.

Confluence Investment Management LLC is an independent, SEC Registered Investment Advisor located in St. Louis, Missouri. The firm provides professional portfolio management and advisory services to institutional and individual clients. Confluence’s investment philosophy is based upon independent, fundamental research that integrates the firm’s evaluation of market cycles, macroeconomics and geopolitical analysis with a value-driven, fundamental company-specific approach. The firm’s portfolio management philosophy begins by assessing risk, and follows through by positioning client portfolios to achieve stated income and growth objectives. The Confluence team is comprised of experienced investment professionals who are dedicated to an exceptional level of client service and communication.