Last week in a tribute to David Letterman’s last Late Show, we highlighted our top 10 keys for stocks. But there was one notable omission: earnings. With the U.S. earnings season effectively over, we did not list earnings as a key driver (though we did note that earnings may get a lift from the potential U.S. economic snapback). But that does not mean that earnings aren’t important. Not only are earnings important for U.S. stocks, they are important for overseas markets as well. This week we evaluate earnings seasons in Europe and Japan, and compare results with those in the U.S., to help inform our global asset allocation decisions. (We plan to look at emerging markets earnings in a future publication.) We continue to focus our allocations within developed markets in the U.S., but have begun to warm up to developed foreign markets in recent months.

We recapped the U.S. earnings season two weeks ago in our Weekly Market Commentary, “Earnings Recap: Good Enough?” (May 11, 2015) and noted that results relative to expectations were good. Excluding the energy sector, S&P 500 earnings grew at a very respectable high-single-digit pace year over year. And despite the stiff headwinds (strong dollar, lower oil prices, West Coast port strikes, severe weather, etc.), guidance was good enough to limit earnings revisions for 2015 to just a marginal decline. We remain comfortable with our view that earnings in 2015 may be good enough to get us to our 2015 total return forecast for the S&P 500 of 5 –  9% for the year.*

* Historically since WWII, the average annual gain on stocks has been 7 – 9%. Thus, our forecast is in-line with average stock market growth. We forecast a 5 – 9% gain, including dividends, for U.S. stocks in 2015 as measured by the S&P 500. This gain is derived from earnings per share (EPS) for S&P 500 companies growing 5 – 10%. Earnings gains are supported by our expectation of improved global economic growth and stable profit margins in 2015.

But what about earnings in Europe and Japan? There the picture may be brightening. While the U.S. was the earnings growth leader in recent years, the tide has begun to turn overseas. 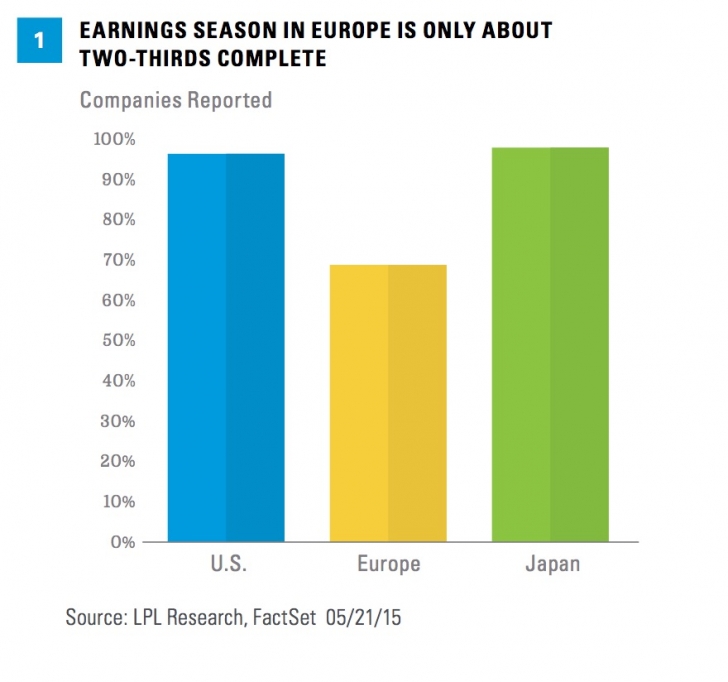 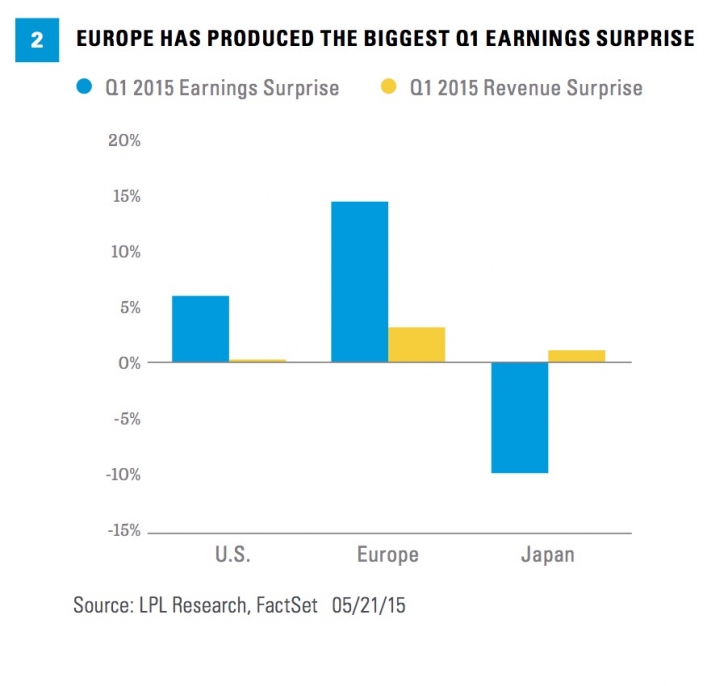 Earnings figures may vary depending on the source (Thomson, FactSet, Bloomberg, etc.). Data providers have different methodologies for calculating earnings, and different interpretations of what constitutes operating earnings as compared with reported (GAAP) earnings. In general, we favor the Thomson data series’ long history in the U.S., but view FactSet as a reliable source of international earnings data.

In Europe, where the reporting season is only about two-thirds complete [Figure 1], earnings have surprised on the upside relative to consensus estimates by a considerable margin, while guidance has led, atypically, to rising estimates for the second quarter of 2015. Surprisingly upbeat results in Europe have contributed to the strong performance for European stocks so far in the second quarter of 2015. Quarter to date, the MSCI Europe has returned 6.4% (in U.S. dollars, unhedged), compared with 3.1% in the U.S. (S&P 500) and 5.4% in Japan (and 6.8% for emerging markets), as of May 22, 2015, based on the MSCI indexes.

At 14%, Europe’s upside earnings surprise in Q1 2015 has strongly outpaced the upside produced by the U.S. and Japan [Figure 2]. This upside came partly from revenue, which came in 3.2% above expectations, thereby beating revenue estimates by more than the U.S. (+0.1%) or Japan (+1.2%). In terms of sectors, energy produced the largest upside surprise and benefited from strong refining profit margins, while financials also made a meaningful contribution.

Broadly, European companies have benefited from better economic growth in the region, partly driven by a cheaper euro currency that has made European exports relatively more attractive to global customers. Growth is still lackluster (Euro area GDP is expected to grow just 1.3% year over year during the second quarter of 2015 and 1.5% for the full year, according to Bloomberg estimates), but it has improved this year. Also keep in mind that for European companies, revenue earned in the U.S. is translated back into more euros when the euro weakens. The euro exchange rate has dropped from $1.37 to $1.11 during the past 12 months, a drop of about 19%. 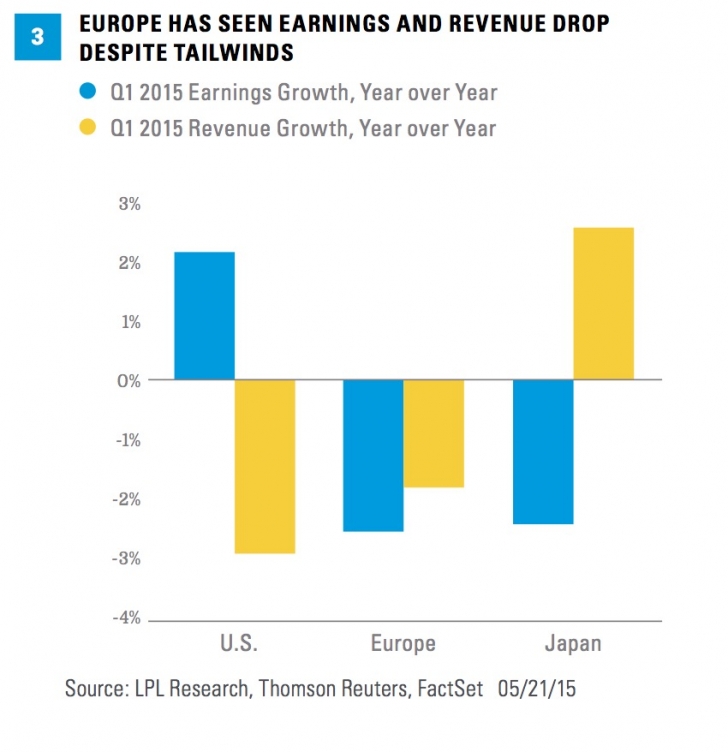 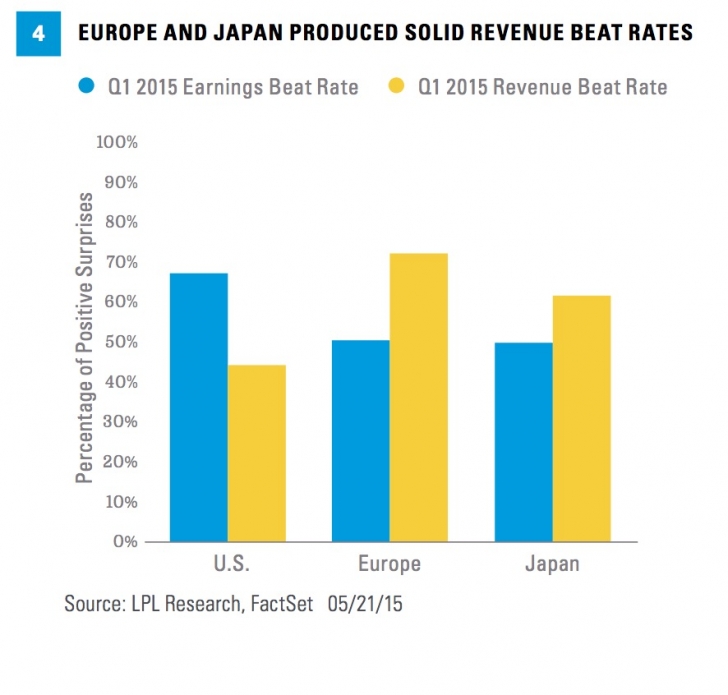 But despite this currency tailwind, European companies in aggregate were unable to grow earnings or revenue year over year during the first quarter of 2015 [Figure 3]. Expectations were so low that earnings still fell despite coming in well above expectations. As in the U.S., energy was a big drag on earnings growth in Europe thanks to the big drop in oil (sector earnings fell 40% despite the big upside surprise). The 2.5% drop in Europe’s overall earnings would be an estimated and very respectable 3–4% increase excluding the energy sector. The surprise was welcomed and the energy drag is likely temporary; but on the surface, these results are hardly inspiring.

But for stock investors, guidance is as important — if not more so — than actual results; and on that basis, the news out of Europe is positive, something that neither the U.S. nor Japan can claim. Since the first quarter ended and first quarter earnings reports started coming in, second quarter 2015 estimates for Europe have increased by 4% (to +8.9% year over year), the first time revisions have turned positive in several years according to Thomson data. This compares with the U.S. where estimates fell 2% (to -2.5%), and with Japan where estimates were reduced by just under 2% (to +16.3%).

Rising estimates and stronger expected earnings growth rates over the remainder of 2015 should bode well for the near-term outlook for European stocks and have contributed to our warming up to the region. But given currency benefits are not likely to be sustained for an extended period of time, and structural challenges to sustaining stronger economic growth remain (such as needed labor reforms and the still healing financial transmission mechanism), we continue to approach Europe with some caution from a tactical perspective. In general, we recommend modest allocations to the region, with a preference for currency-hedged exposure when possible due to our expectation that the U.S. dollar will remain strong or strengthen relative to the euro, due to potentially stronger economic growth and higher interest rates in the U.S. and a potential Federal Reserve (Fed) rate hike in late 2015.

Japan’s revenue growth outpaced that in the U.S. and Europe during the first quarter [Figure 3, page 3], while Japanese companies produced a solid revenue beat rate — though not quite as good as Europe — of over 60% [Figure 4, page 3]. But due to several one-time items, including commodity write-downs and other charge-offs, Japan saw a similar year-over-year earnings decline as Europe during the first quarter. Like Europe, Japan has benefited from better economic growth and currency weakness that has made its exports relatively more attractive. Just reported first quarter gross domestic product (GDP) in Japan rose at a 2.4% annualized rate, above consensus expectations for a 1.6% annualized increase. But that better growth will not result in strong earnings growth until the second quarter of 2015 (the current quarter) is reported.

One of the positives for Japan is that the country does not have much of an energy sector. Japan is a big fuel importer and not a producer — the MSCI Japan Index’s energy weighting is below 1% [Figure 5]. That negligible energy exposure in Japan contrasts with the 7 – 8% energy sector weightings in the S&P 500 Index and the MSCI Europe Index. The country’s large industrials sector weighting (19% in the MSCI Japan Index) has tangential exposure to oil and other commodities through mining equipment, transportation, and infrastructure equipment.

Like Europe, Japanese earnings growth should improve as the year goes on. Consensus estimates for Japan reflect double-digit earnings growth over the next four quarters (Q2 2015 through Q1 2016). Lower energy prices should help this economy dependent on energy imports, especially considering the oil price–sensitive consumer discretionary sector weighting in the MSCI Japan Index is over 22%. The revenue performance is encouraging, and if Japan can deliver the earnings growth expected by the consensus, then the country’s market could potentially produce additional gains in 2015.

Earnings growth in the U.S. was lackluster during the first quarter. But growth is poised to recover as the economy potentially improves over the remainder of the year. While U.S. economic growth was slow, earnings did handily beat expectations and guidance held up despite significant headwinds. Looking overseas, the picture looks similar but is brightening. First quarter earnings growth in Europe and Japan was not impressive, although Japan’s revenue growth was noteworthy. But earnings in those regions may potentially improve significantly over the balance of the year on improving economic growth, continued benefits from cheap currencies, and to varying degrees, low energy prices. Improved earnings outlooks overseas underpin our improving — but still cautious — view on developed foreign markets, although we continue to recommend investors focus equity allocations in the U.S. n

All indexes are unmanaged and cannot be invested into directly.

Because of its narrow focus, specialty sector investing, such as healthcare, financials, or energy, will be subject to greater volatility than investing more broadly across many sectors and companies.

Currency risk is a form of risk that arises from the change in price of one currency against another. Whenever investors or companies have assets or business operations across national borders, they face currency risk if their positions are not hedged.

The MSCI Europe Index is a free float-adjusted, market capitalization-weighted index that is designed to measure the equity market performance of the developed markets in Europe.

When less is more: overcoming the "do something bias"