Divergence between economies and financial markets has been a key macroeconomic trend over the last few years, and reflects in part the deglobalization of the worldwide supply chain. We expect the big winners to be countries and regions with large internal markets; the losers will be smaller countries which have yet to move up the export value chain.

One of the characteristics of globalization is that the process of wealth creation becomes distributed across national boundaries. In the early years of industrialization, raw materials were typically imported by industrialized countries and exported by them as finished goods. As a result of globalization, however, the world supply chain looks more like this: Country A supplies raw material to country B, which manufactures components; country B exports the components to country C, which assembles them into finished goods for export.

From a data-gathering perspective, this opens up the possibility of double-counting—a factor we consider to be crucial in understanding current trends in global trade.

Trade Becomes Regionalized
Double-counting in export data occurs when no account is taken of value added by countries further down the supply chain: that is, reported export value of semifinished goods at each stage of manufacturing embeds the values of all previous processes imported from other countries. One example is the export by China of iPhones to the US in 2009.

At the time, iPhones were retailing at US$500, and this was the value ascribed to each unit exported by China. In reality, however, the value added by China as the iPhone assembler was US$7, while components sourced from Germany, Korea and Japan contributed US$162 (the balance of US$331 was Apple’s 66% margin).

It’s possible to disaggregate double-counting from the export data. The Display below breaks out the double-counted portion of total exports: it’s declined since the global financial crisis, as has the overall level of world trade. This alerts us to the possibility that not only has the volume of global trade declined, but the distribution of the global supply chain across boundaries has begun to unwind, too. The process of globalization, in other words, seems to have slipped into reverse. 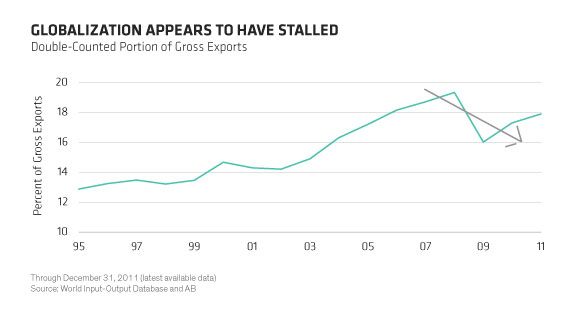 Trends at a regional level appear to support this observation. Between 2000 and 2012, the Asia, Europe and US–Latin America regions all increased their imports of semifinished goods from within their respective regions. While Europe had the greatest absolute share of intraregional imports, Asia experienced the greatest growth in this respect (Display). 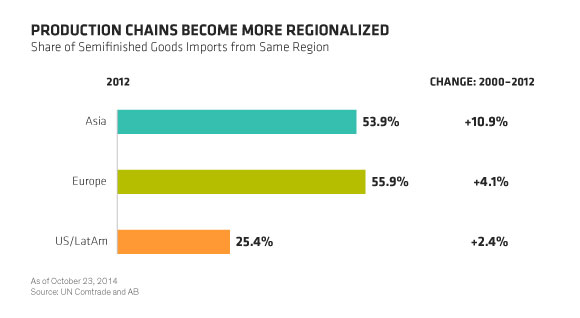 Our research shows that contributing factors include a net loss in the developed world’s share of global value-added exports during 2001–2011 (the US and Japan were the biggest losers) and a net gain by emerging markets (especially China). China has also been consolidating its supply chain internally, showing a marked decrease in the imports of semifinished goods for domestic production during the same period.

Winners and Losers
In the absence of any strong new stimulus to world trade and globalization, we see this trend of deglobalization or increasing regionalization continuing for the foreseeable future.

It’s likely to be helped to some extent by the increasing sophistication of robot-driven manufacturing, which we expect will narrow the gap in labor cost comparisons between countries. This will lead to more production being concentrated at home—particularly where there are large domestic markets.

This has a number of implications for global investors. The decoupling of trade cycles, for example, will mean that the effect of interest-rate changes in large countries will be felt most at local and regional levels but will become less important from an overall global perspective. Regionalization in trade could lead to regionalization of foreign-exchange markets with the emergence of currency blocs: the US dollar in US/Latin America, the euro in Europe and the yuan renminbi in Asia.

As Latin America, Eastern Europe and Asia ex China become drawn into their respective gravitational fields, investors will cease to think of emerging markets as a single asset class, and this will encourage the view that China should be regarded from an investment perspective as a country in its own right.

Overall, we expect the big winners to be countries and regions with large internal markets such as China, the US and the European Union; those less fortunately positioned will be smaller countries with relatively underdeveloped internal markets, which have yet to move up the export value chain.

Hayden Briscoe (pictured) is Director of Asia-Pacific Fixed Income and Vincent Tsui is Economist for Asia-Pacific, both at AB (NYSE:AB).

The Most Dangerous Words In Investing

The Myth of Volatility Drag (Part 1)