Unlike the last three calendar years, in which clear and reliable trends could be found, the one thing that has remained consistent in 2011 is market volatility. In the last three months, the ongoing “risk-on, risk-off” trade which has been prevalent since the market bottom in 2009, has become even more prominent, as further uncertainty has unfolded in the market. With the first half of 2011 now in the history books, we seem no closer to a resolution to the European sovereign debt issues. Furthermore, the U.S. finds itself at a deadlock in deciding whether it should raise its debt ceiling to avoid default on its debt payments. Economic data has also weakened in the second quarter, though it remains to be seen whether it is a soft-patch largely a result of poor winter weather and supply chain disruptions caused by the unfortunate Japanese tsunami earlier in the year. To add insult to injury, political unrest in the Middle East has driven energy prices up, making every day living more expensive to an economy perhaps not ready to stand on its own two feet. As we highlighted in last month’s Monthly Strategy Report, many global equity markets sit at key technical support levels. A further development since that report is that the Canadian equity market recently entered a “dead-cross,” in which its 50-day moving average (MA) crossed below its 200-day MA, a bearish sign. 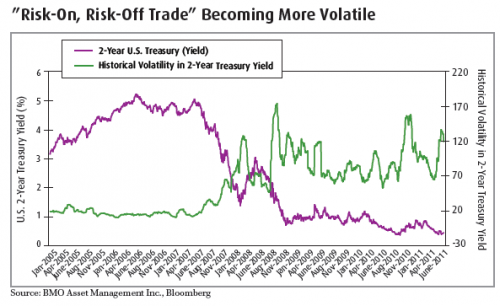 Despite all these negative headlines, there remain positives to be found. Asset classes continue to become less correlated, a sign that markets are further pushing towards normalization. Equity market valuations also remain cheap, with the S&P/TSX Composite Index trading at 15.1x forward earnings and the S&P 500 Composite trading at 13.5x forward earnings, both of which are below their 20.2x and 20.3x fifteen-year historical averages respectively. Furthermore, as we have noted several times this year, cash balances specifically within many U.S. companies are very high, which has made dividend hikes and share buy-back plans a common occurrence in 2011. This ongoing imbalance between the positives and negatives within the market place has been a large part of the reason markets have been so volatile, as evidenced by the realized volatility in the two-year U.S. Treasury yield. 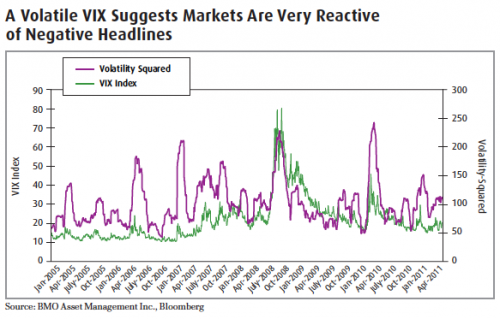 During the credit crisis in 2008, many assets were selling at a discount to their intrinsic value, as investors demanded liquidity. Coming off the market bottom, investors that had exposure to risk assets were well ahead of the game, as investors ploughing back into the market led that discount caused by the need for liquidity to dissipate, and assets to move towards their intrinsic value. In fact, market exposure rather than asset selection was more critical in driving portfolio returns in 2009 and a large part of 2010. However, with markets having further normalized, correlations between assets further declining and much of the easier money from the liquidity discount gone, asset selection should be the key driver in portfolio alpha going forward. Furthermore, as we have highlighted in the past, as markets have now become leveraging and deleveraging cycles rather than traditional boom-bust cycles, risk-allocation should be accompanied with asset-allocation in a portfolio construction process. For further information on risk-allocation, please see our Portfolio Construction 2.0: Risk Allocation whitepaper.

Lowering Volatility and Increasing Yield
As Canadian investors, given the makeup of our economy, the bulk of our portfolios naturally reside in cyclical areas. Several months ago, the CME Group Inc. raised margin requirements on a number of contracts, including gasoline and silver, which could potentially lead to more commodity volatility as quick gains could be met with further margin requirement hikes. Commodity volatility, which we expected and noted in our 2011 Outlook Report in January, will have a significant impact on the Canadian equity markets. As it has been empirically proven that asset allocation rather than security selection drives portfolio volatility, portfolio construction should be the paramount concern for every investor. The strategy that we highlighted coming into the new year, which we continue to recommend, is offsetting non-traditional fixed income risk with traditional fixed income (especially of short-duration) and lower equity beta. The BMO Monthly Income ETF (ZMI) is an efficient way for investors to access many of the areas we highlighted as an investment strategy. Furthermore, as this ETF accesses areas not typically found in an average Canadian portfolio such as Canadian utilities, U.S. high yield bonds and Emerging Market debt, it can further improve a portfolio’s risk/return profile. This ETF may be of consideration for those investors that want to increase yield while lowering portfolio volatility, as it is yield focused and has a realized volatility level much lower than that of the S&P/TSX Composite Index. 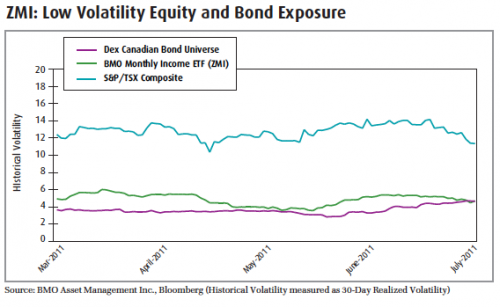 Gold Season
Gold prices reached an all time high of US $1,624.07/ounce in the last several weeks as the deadlock on whether or not to raise the U.S. debt ceiling and the European sovereign debt issues has been a major driver in its recent rise. Should the U.S. default on its debt payments, rating agencies would downgrade the U.S., potentially resulting in extreme negative ramifications on the entire global financial system. U.S. Treasuries, despite the country’s uncontrolled debt levels, are still recognized as a “safe-haven” and largely held by many central banks across the world. Furthermore, many funds are mandated to invest in bonds above a certain credit rating; therefore a rating downgrade could potentially lead to mass selling. However, with the ongoing sovereign debt issues in Europe, the euro is a far cry from a substitute for the U.S. dollar, and issued debt from other countries is not adequate to soak up the potential switch. Despite the gold standard being dropped decades ago, bullion has become recognized as an alternative currency used as a hedge against fiat money as a result.

The 2011 Gold Season is Just around the Corner