Sparks: Are Stocks Telling a Better Story For the Second Half? (Sonders)

Sparks: Are Stocks Telling a Better Story For the Second Half?

Lately, one of the most frequently asked questions I hear at client events is, "What keeps you up at night?" It reflects an at-times grave set of macro obstacles that the market has had to climb.

In fact, the vast majority of questions I've been getting at events are of the macro variety. Rarely am I asked about what companies are doing or saying, about corporate earnings, about the stock market's short- or even longer-term fundamentals.

The macro remains top-of-mind, including:

One of the things I like to talk about at events is what could actually go right (and maybe already is). I am always most intrigued by the story no one is telling.

Today, that story would be a very positive one. I don't write this with blinders on, but I want to lay out a realistic case for a better macro (and market) environment than many are expecting.

Déjà vu
As you all know, much of what has been plaguing markets and confidence this spring/early summer is reminiscent of last summer's economic soft patch. Other than the aftermath of Japan's natural and nuclear disasters, the markets have faced similar pressures as last summer.

But at the same time, there has been meaningful improvement in most of the underlying fundamentals, as you can see in the table below.

Earnings surprise potential
Let's hone in on corporate profits, which are 10% higher than they were at this point last year (see table above).

We are just now heading into the reporting season for 2011's second-quarter earnings. According to Bloomberg, the S&P 500 is expected to post 13.3% year-over-year earnings growth in the second quarter, which is down from over 14% less than a month ago.

And there's a lot of chatter that estimates haven't come down enough to reflect the aforementioned economic soft patch (and margin pressure from previously elevated commodity prices).

ISI Group recently looked at the history of quarterly earnings relative to expectations and found that in the past 12 nonrecessionary quarters, analysts' earnings estimates were too low 75% of the time by an average of 10.8 percentage points (see table below). All other factors aside, it would suggest that second-quarter S&P 500 earnings growth could actually be above 20%. 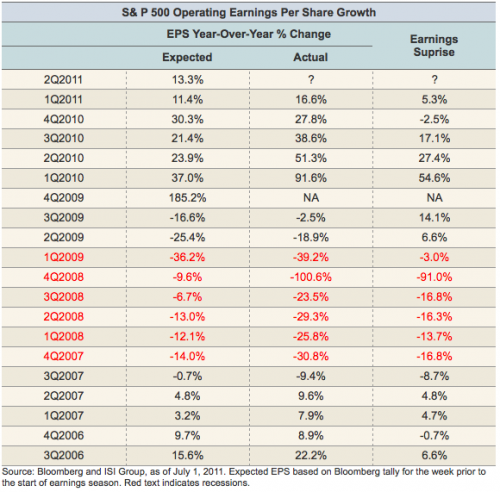 Economic Slowdown is not Transitory - ECRI's Achuthan Sticking to Script