Gold Has Reached the Stage We All Dream About

by Jared Dillian, The 10th Man

Since starting The 10th Man in 2014, I’ve written about gold maybe a dozen times. You don’t need to look each essay up—I was bullish every time. I’m still bullish.

Taking a ride in the Wayback Machine, why was everyone so bullish on gold from 2008–2011? Quantitative easing. That seems quaint today, after over a decade of on-and-off money creation, but the thinking at the time was that we would print too much money and it would cause inflation. Took a while, but it eventually did.

They say gold is a hedge against inflation—that it’s a smart risk-management strategy. Maybe it is, but it’s a highly imperfect one. We have lots of inflation, and gold has spent the last eight months going down.

Still, I see gold as a hedge against inflation in the super long run, and one reason I’m bullish on it is because I don’t believe the Fed has the willingness to do what it takes to eliminate inflation. They’re talking tough right now, but there are voices within the Fed calling for a pause in interest rate hikes, saying we should consider the cumulative effect of tightening and the lags associated with monetary policy. This is a matter of much debate on Twitter and elsewhere.

A Second Wave of Inflation

If you look at the two other big inflationary episodes in history, the 1940s and the 1970s, you will notice that there were multiple waves of inflation stretching out over the course of years. We are currently on the back side of the first wave. It is my belief that the Fed will pivot, inflation will moderate for a time, and then we will get a second wave that is even bigger than the first.

Really, though, gold isn’t responding to inflation so much as it’s responding to the Fed. The more the Fed hikes, the lower gold goes. It was up over 3% last Friday on a hint of pausing from Boston Fed President Susan Collins. It doesn’t take much.

It is also my belief that the economic data will deteriorate significantly (because the economy is deteriorating significantly). When it does, the rate hikes will stop. The late Paul Volcker is a legend in central banking for stopping the inflation of the 1970s. The economy also shrank by 6% in a year. Powell may think he’s tough, but he’s not that tough. Ultimately, we won’t address the root cause of the inflation (which is the psychology surrounding it), and it will be back again.

I am bullish on gold.

I am bullish on value.

What if gold = value?

Here is a chart of gold as of Friday’s close: 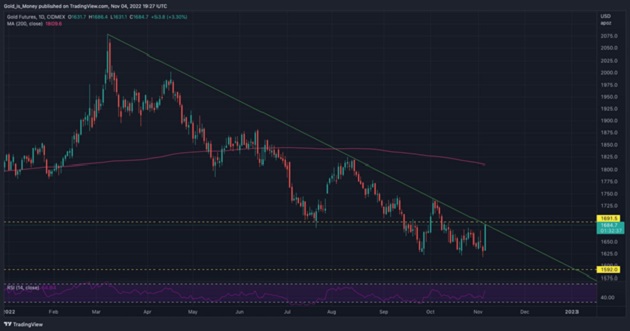 I have a good feeling about this. The chart has been unable to get meaningfully below 1,600 and is forming a base. Get above the trendline, and we’re off to the races.

Now, it’s tough to take a long view in light of the day-to-day price action. There has been a lot of bellyaching when the drawdown actually hasn’t been that bad, at about 20%. If you’re in a multidecade trade and you can’t take a 20% drawdown, you should probably just give your money to Vanguard. Of course, a lot of people trade gold futures, and there have been a lot of margin calls on the way down.

You must structure a trade in such a fashion that you can stick with it in good times and bad. That doesn’t just apply to gold—it applies to stocks and everything else.

When it comes to gold, I oscillate between bullish, very bullish, or insanely bullish. I am very bullish at the moment. I might be the only person bullish on gold that I know. Well, not the only person, but let’s just say that from a sentiment standpoint, gold has reached that stage of neglect that we all dream about. It’s not so much that everyone’s bearish; it’s that nobody cares. The best bull markets come from periods of neglect.

I think we are down to tag ends of the drawdown, which is perfectly coinciding with a change in posture out of the Fed.