2022 Global Outlook: Slowing But Not Slow

A high tide of growth, aided by a sea change in fiscal policy, is likely to help float the global economy safely over the rocks of risks in 2022, despite waves of worries emanating from COVID, inflation, shortages, and rate hikes. 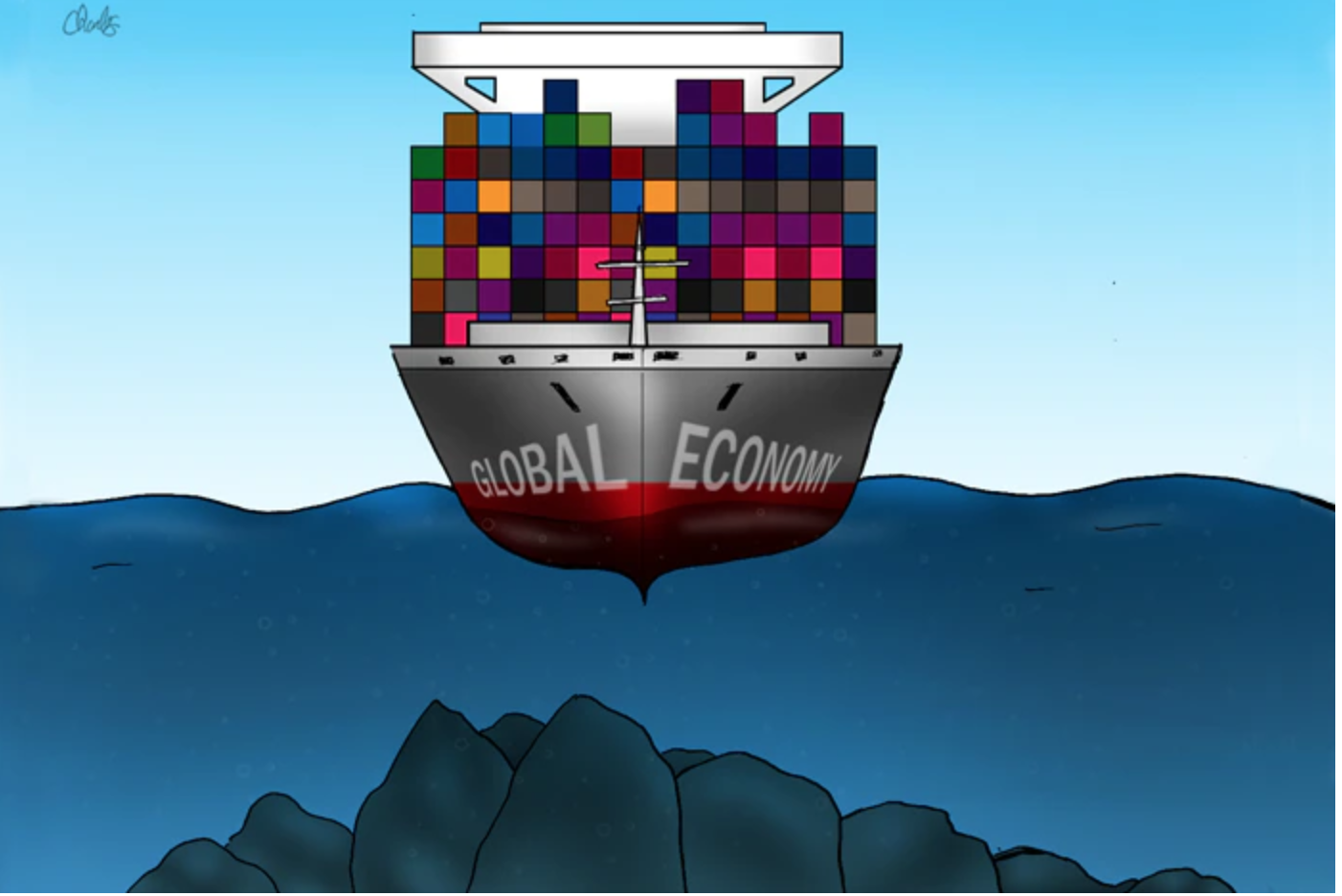 Global GDP has surpassed its pre-pandemic level in 2021 and completed the transition from recovery to expansion, aided by strong policy support, the deployment of effective vaccines and the resumption of economic activities. In 2022, global GDP is anticipated to grow around 5%, forming the strongest back-to-back years for the world economy since the early 1970s.

The likelihood of additional fiscal support in Europe, Japan, and the United States combined with the spending of pent-up savings by consumers and businesses supports global growth prospects. China’s policies in 2022 may offer targeted support for favored industries, allowing economic growth to slow only modestly. Although monetary policy may begin to tighten, the slow pace of withdrawal from pandemic-era policies may limit any negative impact on stock valuations. Inflation pressures are likely to ease over the course of the year; some of 2021’s shortages may turn into gluts by the second half of 2022.

Historically, when global growth is above average, international stocks perform well, even when that growth rate is slowing, due to a high weighting in economically sensitive sectors.

The pace of the global economic rebound may have peaked in 2021. Emergence from COVID lockdowns saw peak annualized growth rates for the U.S (6.7%) and U.K. (23.6%) in the second quarter, and the Eurozone (9.3%) in the third. Japan’s growth rate is anticipated by economists to rise to its fastest pace of the year at 4.1% in the final quarter of 2021.

But not all countries have reached peak growth. In fact, only half of the world’s biggest 45 economies (accounting for 88% of the world economy) are expected to slow in 2022. Japan, Germany and Norway are expected to see growth accelerate in 2022 from 2021’s pace. Overall, world growth is expected to hit 4.9%, below the 5.9% pace in 2021 but well above the average rate of 3.0% over the past 50 years, according to IMF forecasts. The world hasn’t experienced back-to-back years of growth this strong in nearly 50 years. This helps provide a sizable cushion against the downside risks of inflation, supply problems, central bank rate hikes and COVID. 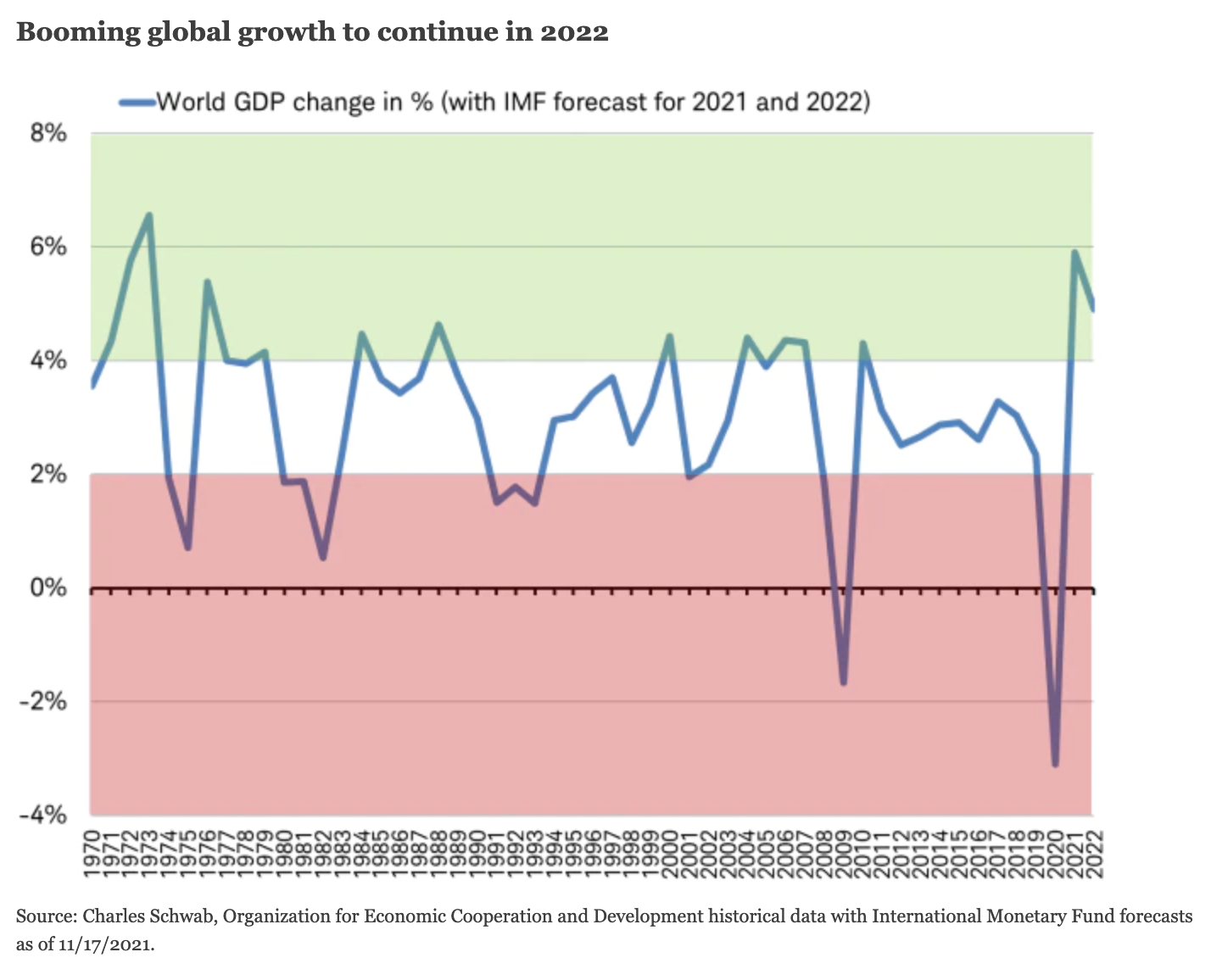 As COVID becomes endemic rather than pandemic, a seasonal surge in cases could lead to some new restrictions. Yet, each successive wave is likely to have diminished economic impact with hospitalization trends, rather than new case counts, becoming the hurdle for restrictions. Countries with higher vaccination rates could have reduced levels of hospitalizations, making restrictions shorter and more targeted at local outbreaks rather than nationwide.

While investors’ attention has been focused on the U.S. budget debate, a dramatic fiscal sea change has been taking place in Europe, in support of economic growth. Economic theory states that each incremental dollar spent by a government beyond what it collects should boost economic output by at least that amount.

In the last global economic cycle, GDP growth in the Eurozone was slower than average, attributed largely to a policy of “austerity.”  During this period, austerity was the word used to describe the tight budgets imposed to promote fiscal stability in the aftermath of the Great Financial Crisis. In this global economic cycle, as Europe emerged from the Great Lockdown, policymakers are taking the opposite approach and expanding budgets in a policy of abundance.

Reviewing the early years of the last global economic cycle, 2011 through 2013, we can see that the primary budget balance in Europe swung from a deficit to a surplus. The governments of Europe increasingly took in more money than it spent, leaving the region a lonely outlier compared with the rest of the world, and resulting in a substantial drag on Europe’s growth. Current IMF forecasts for the years ahead stand in sharp contrast to the last cycle, estimating budget deficits in 2022 and beyond as government spending exceeds income and provides a tailwind to economic growth. 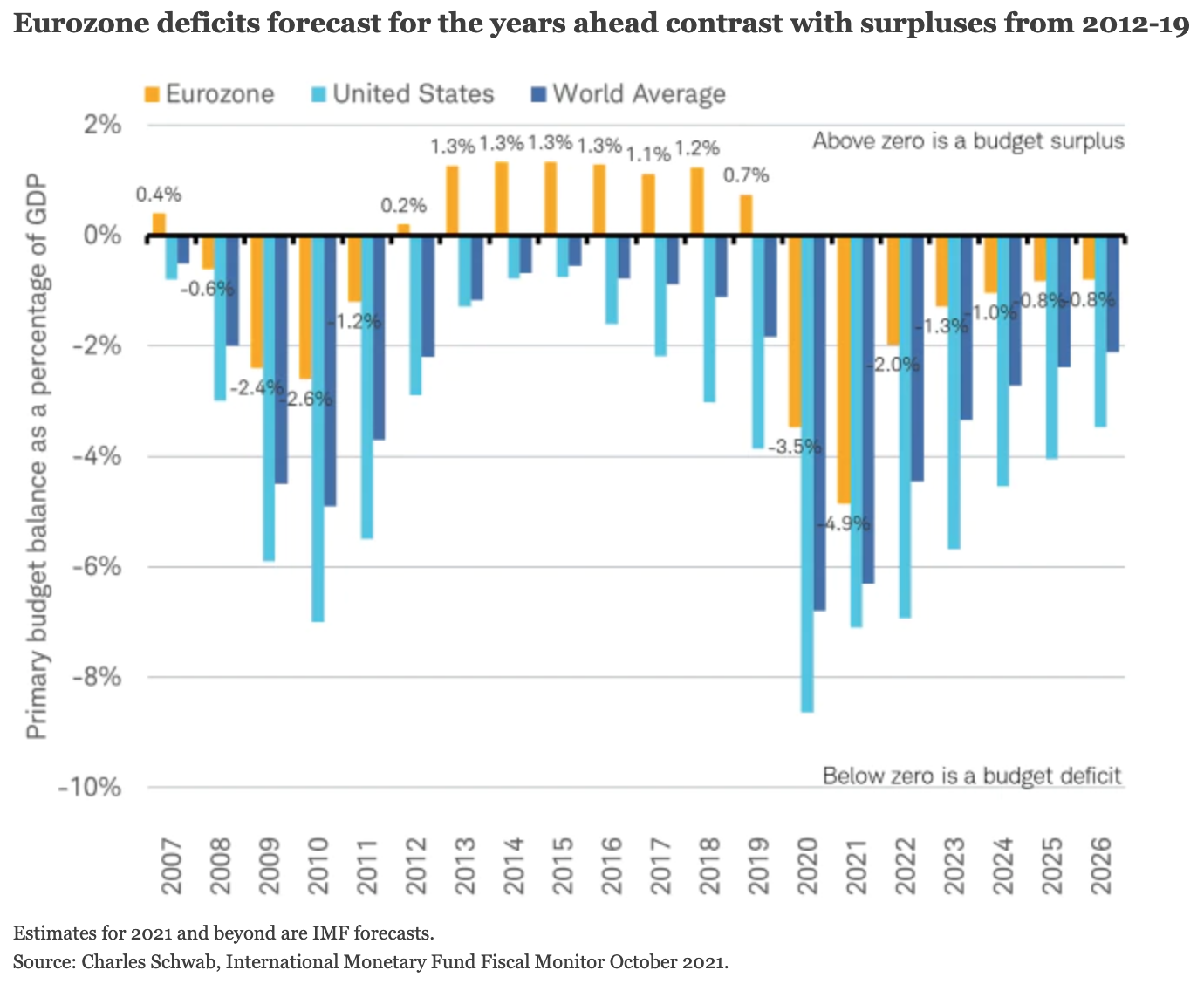 There are risks with running persistent deficits. The potential for rising interest rates may make the governments’ investment in the economy more costly to finance. A rise in the cost of borrowing could eventually curb spending. While rates have risen recently, the threat to budget deficits posed by interest rates remains reasonably low for the near-term. Eurozone bond yields are still negative in Germany and below 1% elsewhere, including Italy. Post-pandemic fiscal policy is likely to end up being a boost to growth rather than the drag it was following the Global Financial Crisis.

Under the surface, there are rocky risks to this spending picture like COVID-19 making a meaningful resurgence, high inflation turning out to be permanent, or a changing attitude by the market towards ever rising government debt. For now, fiscal policies around the world are trending towards economic stimulus, supporting continued global economic expansion.

Monetary policymakers are no longer signaling as much confidence that the rise in inflation will be quick to fade. But they have expressed views that tighter monetary policy may not be effective at taming the current drivers of inflation, which could prompt a softening of the labor market well before jobs return to pre-pandemic levels.

Rather than risk acting prematurely, they are electing to wait and see, and take their time to unwind their unconventional pandemic-era policies. An increasing number of the world’s central banks are slowly beginning to raise interest rates. The blended central bank policy rate for the Group of 20 (G20) countries has started to creep higher and is now about a third of a percentage point above its low, although it remains very low on a historical basis, as you can see in the chart below. 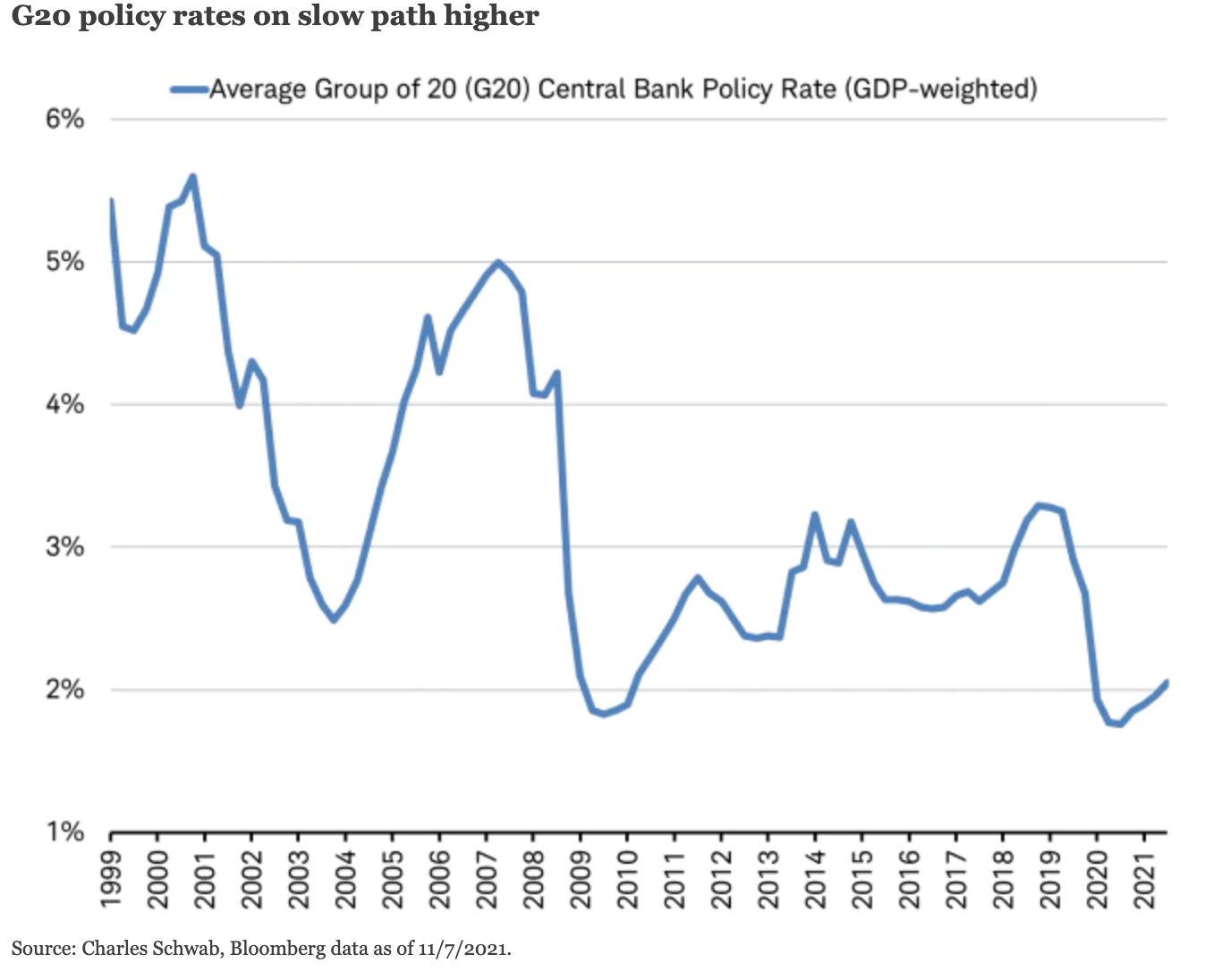 Historically, when central banks were lifting rates from a low level (below average) as they are now, stocks in the MSCI World Index performed best (+10.3%). Conversely, it was when they were being cut from a high level (above average), global stocks performed the worst (-17.8%).

This performance makes sense. The economic and earnings environment is the primary driver of the stock market and central bank behavior. When the economy is strengthening after a downturn, central banks often lift rates from low levels seeking to normalize policy. When the economy is weakening, central banks are often cutting rates to support economic activity. For next year, global economic growth is expected to remain above average, and the rise in policy rates is likely to come amid a favorable growth backdrop for stocks. Fears of a gradual slowing of stimulus causing a major drop for the world’s stock markets seem unwarranted; the evidence suggests potential for a positive outcome.

The supply shortages lifting inflation endured all year as strong demand outstripped supply, worsened by supply chain logjams. Fortunately, the globe may be past the worst of the supply chain logjam now that we are past the seasonal peak in shipping. The cost to ship a container unit on the world’s busiest route has fallen 30% from its peak in late September, although it may take some time for delivery times to return to normal. 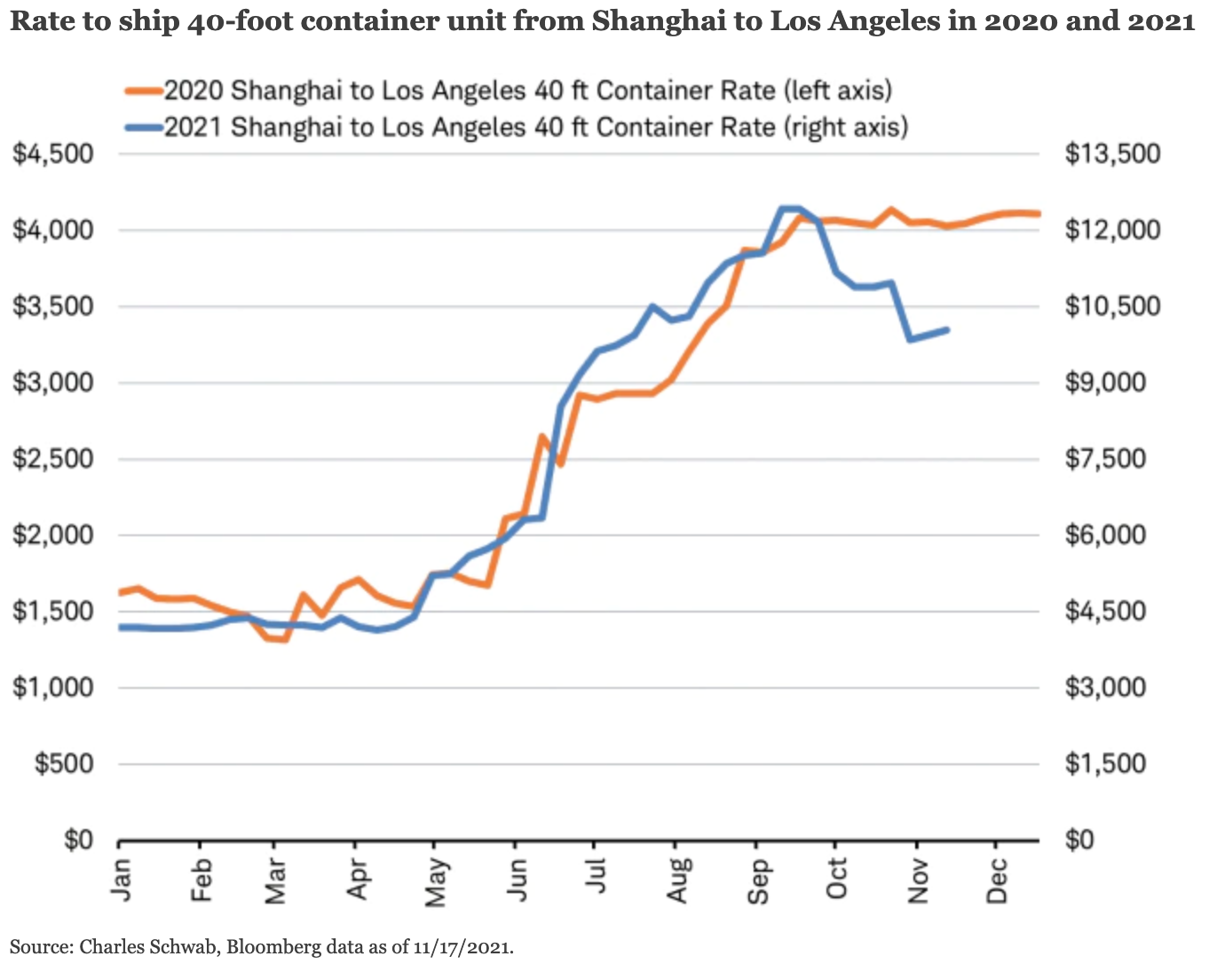 After a year of supply shortages, the global economy may be closer to the end of the supply chain problems than the beginning. As a leading economic indicator, markets tend to look six-to-twelve months ahead; they may soon begin to consider the possibility that some shortages have started to ease and the potential for gluts in the second half of next year may have started to form. If supply gluts begin to emerge, manufacturing inputs like semiconductors and finished goods such as cars may see supply outrun demand, easing inflation pressures.

Labor shortages have also contributed to global inflation concerns. Headlines touting big union pay demands and strike announcements may seem to echo the hyper-inflationary 1970s. Yet, these strikes are unlikely to reach the same intensity or have a similar impact on wages. Unions have been winning wage increases, but generally at lower levels than the country’s pace of inflation. Where wages are indexed to inflation, we are not seeing big increases. For example, the minimum wage increase was 1.6% in Spain and 2.2% in France.

Although inflation pushed up some costs, corporate profit margins hit 10 year highs for both U.S. and international companies in the third quarter; companies have been largely successful at passing those costs on to customers. Stocks continued to move higher during the earnings reporting season, as results widely exceeded estimates. 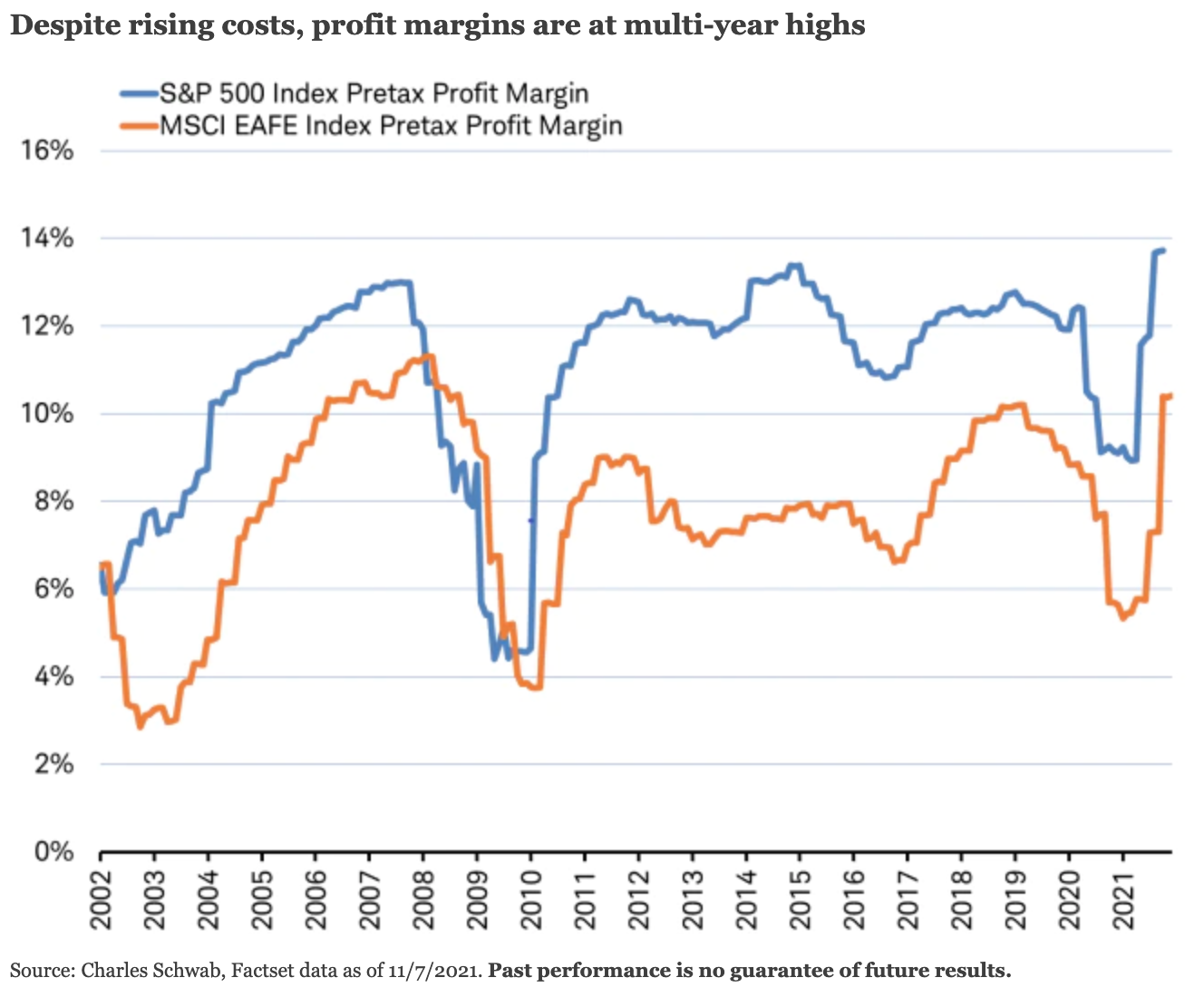 China’s economy dominates the emerging market landscape and could face domestic headwinds from a slowing property market, consumer caution in response to a zero-tolerance policy for COVID infections and the continued economic transition to achieve “common prosperity.” That said, the latest data shows the Chinese consumer isn’t worried about housing and prices for homes are still seeing price increases year-over-year despite a single month-over-month decline of -0.25% in October—a more dramatic decline or a string of declines could prompt a consumer pullback.

Potential downside risks to growth could prompt the People’s Bank of China to add stimulus, even as other central banks are starting to tighten. China’s government is targeting makers of green technologies, semiconductors, and consumer brands with fiscal support almost as aggressively as they targeted overleveraged property developers, education companies and social media platforms with new regulation. As the 2021 regulatory tightening fades, the focus may shift to targeted easing, providing support to Chinese and emerging market stocks.

While China may cut interest rates, most emerging market central banks have spent 2021 raising rates, ahead of developed market countries to tamp down their faster inflation and support their currencies against the rising U.S. dollar. If the more rapid pace of rate hikes continues throughout 2022, it risks tighter financial conditions in these markets which could slow growth from the IMF’s 5.1% GDP forecast for these emerging economies. Overall, these markets tend to be reliant on exports, and benefit when global growth is above average. Easing shipping logjams in supplies may boost emerging market stocks, but global supply gluts could impede export-reliant profits.

Economic growth is likely to slow in 2022 but remain at a historically rapid pace, supporting a solid earnings outlook. While equity valuations are not cheap, they are not at extreme levels. The MSCI EAFE Index (non-U.S. developed stocks) currently trades at 15.5-times forward earnings, as you can see in the chart below. 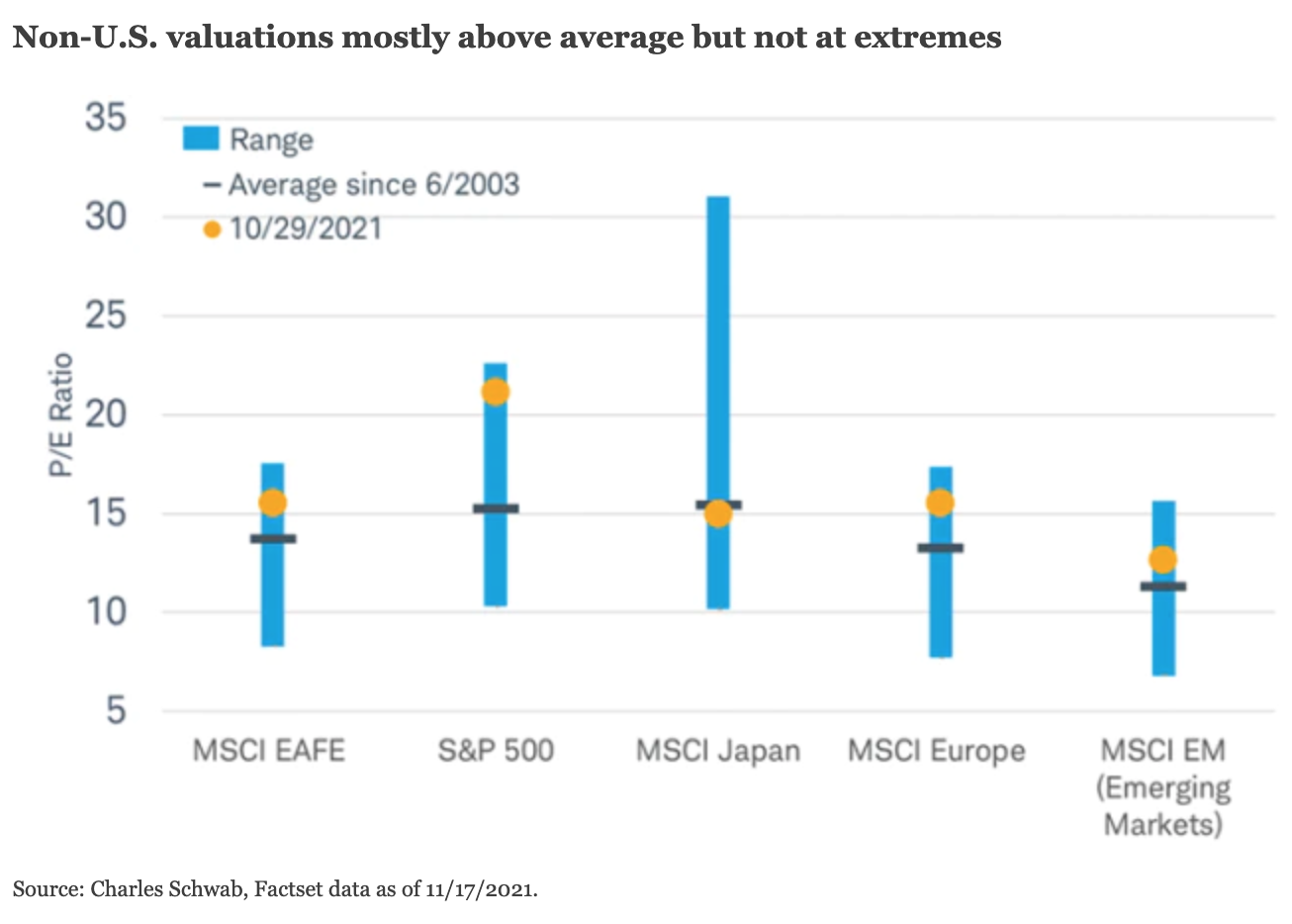 In 2022, the favorable backdrop for global stocks may be accompanied by rising volatility as central banks begin to slowly hike rates. In closing, we highlight four themes for investors:

Are we still in a bull market?