In the third quarter of 2021, Russell Investments held its annual Partner Innovation Lab, a roundtable event where large asset owners from various geographies brainstorm their greatest concerns and areas of interest. We asked Cerulli Associates to interview participating organizations, as well as some of our asset management partners, to extract individual perspectives on topics discussed at the event.* The result was a three-part series of insights.

The second and third parts of this series, which focus on climate change investing and investors’ methods for seeking returns, respectively, will be published in the coming months.

"The era of good intentions is coming to an end. There needs to be a genuine commitment and those results are going to take some time. It takes at least a generation for those things to develop."

That said, internal pressure was seen as the greatest driving force for D&I. Most organizations say the need for additional diversity has generally arisen through company and team meetings. Several said their younger employees are particularly focused on diversity efforts.

"I would say there would not be as much of a focus on DEI if we hadn't had that top-down review and the push from the firm to include DEI."

While most asset owners and managers have some sort of grass-roots initiative, many also cite organizations’ leadership driving the push. This often takes the form of the CEO, board of directors, or an executive committee making diversity a firm-wide objective. Besides communicating to the firm that diversity is an important initiative, the top of the organization may incentivize diversity via executive compensation. One manager with whom Cerulli spoke explained that 5% of executives’ bonuses were tied to improvements in their teams’ diversity metrics. Another manager said that rather than tying specific employee bonuses to team diversity, the firm’s overall bonus pool was partially determined based on improvements in diversity. Another top-down measure that regularly surfaced in interviews was firms requiring diversity training for hiring managers to ensure the managers are aware of their own biases. 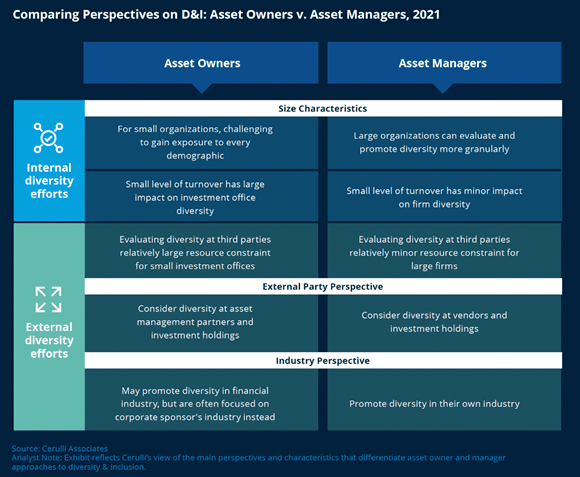 "Our CEO has made it one of his top-three priorities. With that, we have objectives we need to meet. Starting last year, our head of diversity is now on the operating committee of highest-level leaders."

One of the key challenges stated by both asset owners and managers was simply defining D&I. They must define diversity before they can promote it, and they must also define what constitutes success. Most 10X10 participants define diversity in terms of gender, race and ethnicity, and they generally set goals for diversity (or set aspirational benchmarks) based on the diversity metrics of the country in which the hiring office is located.

"There’s been an inflection point and people want to actually see results. That’s tough to do. DEI can mean different things to different people. [It is] difficult to define what success is going to be."

"There’s a number of dimensions to this. I think about diversity, mainly in terms of diversity of thought, which comes from different circumstances, backgrounds, age and other things."

Some asset managers described efforts to benchmark themselves against industry peers. Some asset owners and managers told Cerulli that they do not have specific diversity benchmarks or targets. These organizations are more directional, taking the approach, “We just need more.” While they are not necessarily behind in considering diversity measures, these organizations tend to be further behind in achieving results.

"We track our diversity statistics monthly. And we have targets in terms of what we hope to look like in a three-to-five-year time frame."

When it comes to the successful implementation of D&I, one asset manager with whom Cerulli spoke broke down the factors into four buckets: hiring, developing, promoting and retaining.

Both institutional investors and managers implement diversity measures via hiring and recruiting practices. Almost all 10x10 participants spoke of the need to search for untapped pools of talent, often recruiting from non-traditional channels. Some have addressed this by expanding their list of target schools. Others have implemented blind hiring processes, where they don’t target any specific universities. Some participants (both asset owners and managers) said that their companies have begun to broaden their focus on academic majors as well.

"We are conscious that we don’t want to just be poaching diverse talent from our peers."

In addition to acquiring talent, asset owners and managers with whom Cerulli spoke described the necessity of measures meant to retain talent. Although promotions are a tool that organizations could use to retain diverse talent, no 10x10 participants mentioned diversity being a key input into promotion decisions. Rather, organizations seem to focus more on developing diverse talent so that they are later promoted on their own merits. Tools used for developing talent include mentorship programs, where entry-level employees are matched with an executive mentor.

"I don’t think that we’ve added to the industry-wide pool of diversity because we are taking elite, diverse, talent from elsewhere."

Many organizations cite difficulty in retaining diverse talent in the middle of their hierarchical structures. One of the reasons for this is that firms are competing for the same limited pool of candidates for roles requiring experience in the asset management industry. While HR, marketing and operational departments tend to have greater diversity, for roles that strictly require investment management experience, organizations are subject to the pool that the industry feeds them—a pool that tends to exhibit limited diversity. In attempts to increase diversity at their own firms, managers find themselves recruiting talent from their peers (or “poaching diverse talent,” as one manager puts it), rather than building up diversity across the industry. Hence, several organizations have put efforts into growing the overall pool of candidates in the asset management space.

"That departure of early career hires is something we’ve tried to fix through development and mentorship programs. The jury is still out on trying different things. Large firms have the resources to do those things. Do smaller firms have the ability to do that? I don’t know."

While many asset owners traditionally evaluated the D&I of asset managers based on ownership, some are now broadening their focus to managers’ entire organizations. One asset owner initially assessed the D&I of managers in its public investment portfolio, then expanded to private investments. Notably, multiple asset owners mentioned that measuring diversity in the alternatives space is more difficult than it is for traditional managers due to the lack of reporting requirements. Finally, a select few asset owners have gone so far as to evaluate diversity at holdings/portfolio companies of funds.

"We started moving away from ownership, to who are the decision-makers, the partners, the managing directors. If all of the low-ranking employees are women or minorities [while ownership is male/white], that doesn’t say great things about the culture of diversity."

"We tend to favor metrics that are broader than just ownership structure. We want to look at the whole employee base because that’s more representative of diversity than just one or two owners."

Most organizations do not have formal policies for diversity—it is simply a consideration in the overall process. And some asset owners look for managers that are making progress on diversity initiatives rather than judging them on their level of diversity at a given point in time.

"It was at an annual meeting; three principals walk in and I was about to ask about the lack of diversity and they brought it up before we could even get there. They had just lost a diverse group of associates and they had a plan to do better. And a year later they did everything they said they would do. So you have to be in the maintenance mode with every manager."

Asset owners that didn’t have approaches to assessing D&I externally mentioned that they intended to start this initiative by talking to their investment consultants or OCIOs. Some of these asset owners are in the brainstorming stage, trying to discover ways to assess and implement diversity measures. They rely on these types of partners to educate them on initiatives of other clients. By using intermediaries, these investors can discover best practices.

"We aren’t doing anything with D&I right now. Once we get ESG to a place we are comfortable with, then we will shift our focus to D&I. We would turn to our investment manager to take on this project and see what their capabilities [are] and see what the best practices are. If you have a small team, this is just not something that you will be able to take on."

A broad takeaway from this research is that promoting diversity requires proactive behavior. To take on a comprehensive approach, an organization must define diversity, set goals or objectives, implement measures to carry out those objectives and employ systems to track progress. An organization must also maintain an inclusive environment for it to tap into diverse perspectives. Another takeaway is that diversity is not free—an organization must devote resources to acquire and maintain it or, alternatively, absorb a substantial opportunity cost.