One of the key indicators I follow is consumer confidence. With more than two-thirds of the economy based on consumer spending, confidence is the key determinant of growth, even more so than jobs. Yes, jobs are important—you can’t spend money if you’re not making it. But to spend the extra money that kicks growth up another notch, you need to have the job and feel confident enough to spend.

How Do We Measure Confidence?

There are two major surveys, one by the Conference Board and one by the University of Michigan, that measure consumer confidence, although in slightly different ways. Despite those differences, however, they have been remarkably consistent over time. As you can see in the chart below, over the past 40 years, they have been almost 90 percent correlated. In economics, that correlation pretty much means they are saying the same thing. 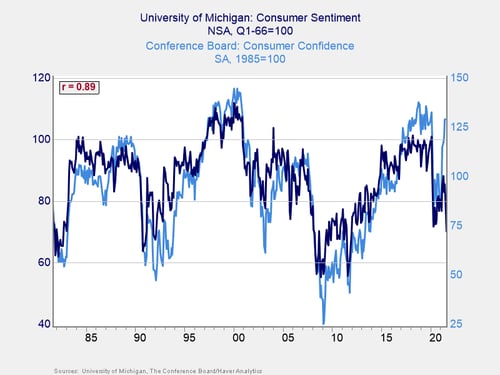 Are We Seeing a Change in Trend?

Generally speaking, the Conference Board indicator has shown greater changes and tends to run above and below the Michigan indicator (as you can see in the chart). Even then, however, they tend to move in the same direction. And that pattern had held in this cycle as well—up until quite recently.

Over the past year or so, confidence has risen sharply, coming off the trough at the start of the pandemic, and was approaching pre-pandemic highs. Both surveys were saying the same thing. Then something started to change. Two months ago, the Michigan number pulled back a bit, before dropping sharply last month. The Conference Board number stayed high, but that disconnect said that something was likely going on and that the numbers were likely to converge again at some point, either up or down.

Well, it didn’t take that long—and the answer was down. This morning, the Conference Board reading was down sharply, meaning that the Michigan number is the better indicator and that confidence has indeed started to slump. We may well be looking at a change in trend on consumer confidence.

Why Would This Happen? Why Now?

There are multiple potential reasons for this slump. The spread of the Delta variant of COVID has started to get people worried. Higher prices (for homes and cars, especially) are discouraging for people who want to get on with their lives. The expiration, either recent or pending, of federal supplemental unemployment insurance and the pending expiration of the eviction moratorium will hit confidence. People have a lot to worry about, and it is not really surprising that the confidence numbers are pulling back and doing so sharply. Although one or two months of data are not determinative, these numbers are likely ratifying what we’re already seeing in the headlines.

So, if there is a change in confidence—and, as noted, it is certainly plausible—what does that mean for the economy and markets? And how can we tell?

Is There a Pattern?

What really stands out in this month’s report is the difference between the two measures. Given that, I went back and graphed that difference (the Conference Board number minus the Michigan number) to see if historically there were any patterns.

There were, as you can see. Over the past 40 years, when the gap between the two confidence measures hit high levels, economic and market trouble tended to follow a couple of years thereafter. Looking at the chart below, we could well be seeing more trouble ahead if confidence continues to decline, which would make economic sense. 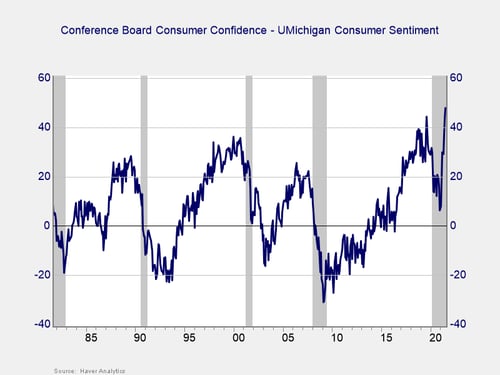 Beyond that, I am not sure what this difference means. This is, frankly, a preliminary analysis, sparked by this morning’s weak Conference Board number. I am not entirely sure what to make of this data yet. I will be digging more into the methodology of both series, to try to better understand the underlying relationship. While this certainly isn’t causative, it is potentially a good risk indicator and one that is independent of others.

What I do know is that confidence remains key, and the most recent numbers we are seeing raise real concerns. My outlook remains positive, but one of the key risks just reasserted itself.

Brad McMillan is the chief investment officer at Commonwealth Financial Network, the nation's largest privately held independent broker/dealer-RIA. He is the primary spokesperson for Commonwealth's investment divisions. This post originally appeared on The Independent Market Observer, a daily blog authored by Brad McMillan.

Forward-looking statements are based on our reasonable expectations and are not guaranteed. Diversification does not assure a profit or protect against loss in declining markets. There is no guarantee that any objective or goal will be achieved. All indices are unmanaged and investors cannot actually invest directly into an index. Unlike investments, indices do not incur management fees, charges, or expenses. Past performance is not indicative of future results.

Here Comes the Worst Month of the Year