Be Cautious About Upcoming Data

The market seems sensitive currently to news about inflation and growth. We are entering a period when data may be on a wild ride, and markets may follow suit. Here’s why I think market participants shouldn’t panic over big moves in upcoming data.

This month, we mark the one-year anniversary of the beginning of the COVID-19 pandemic in the United States. The economic impact was severe and swift. In just a two-month period (February to April), the unemployment rate rose from its lowest peacetime rate since the 1920s to the highest rate since the Great Depression. Economic activity collapsed. The economic shock smashed prices. Core and headline inflation recorded three consecutive month-to-month negative readings in March, April and May. Nearly every measure of economic activity was depressed in the spring months of 2020. Now, a year later, we should prepare for potential distortions in year-over-year comparisons.

I’ll use inflation to illustrate this phenomenon, known as the base effect. Let’s say inflation is moderate, in the range of 0.1%-0.2%, during the next three months. Even with moderate monthly inflation, the year-over-year percent changes in price indexes would be disproportionately large because they’d be calculated against the abnormally low price levels of the spring 2020 lockdown months.

In January and February of 2021, year-over-year core inflation figures (for both the CPI-U[i] and PCE Price Index[ii]) were below 2.0%. I believe these figures could potentially jump as high as 2.4% in the next few months, not because of any significant increase in inflation, but because of the base effect. I anticipate a similar story with headline inflation. Current readings are below 2.0%, but I believe spring readings could exceed 3.0%. 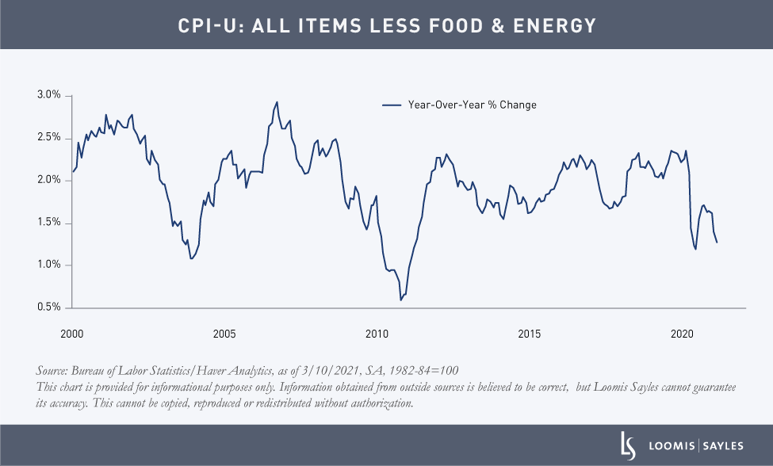 I don’t see any way of getting around the base effect. Economic data broadly declined in the spring months of 2020, and any year-over-year comparisons against this period will likely be distorted and misleading. Instead, I suggest focusing on the monthly changes.

Fed not likely to worry about transitory data

The Fed has already warned that high inflation figures above its 2.0% target this spring would likely be transitory, an artifact of the base effect. I do not think the Fed will worry about such transitory gains. I believe year-over-year inflation will ease in the second half of 2021 once the calculations move beyond the early months of the pandemic. Longer term, I think inflation will continue to remain subdued, even if volatile.

[i] The Consumer Price Index (CPI-U) is a measure of the average change over time in the prices paid by urban consumers for a market basket of consumer goods and services.

[ii] Personal Consumption Expenditures (PCE) Price Index. A measure of the prices that people living in the United States, or those buying on their behalf, pay for goods and services. The PCE price index is known for capturing inflation (or deflation) across a wide range of consumer expenses and reflecting changes in consumer behavior.

Inflation and The Fed