The first trade accord between the U.S. and China leaves plenty of tension in place.

Armistices and ceasefires do not necessarily mark the end of a war.  On many occasions, they establish only a pause in hostilities for an agreed timeframe or within a limited area while an attempt is made to negotiate a lasting peace.  This is perhaps the best way to summarize last week’s “Phase One” agreement between the U.S. and China.

After two years of rising tariffs and receding goodwill, the signing ceremony led many observers to breathe a sigh of relief.  Trade uncertainty is a major issue facing the global economy, and de-escalation is a welcome change of tone.  World equity markets cheered.

The signed agreement includes some noteworthy features.  China has agreed to purchase $200 billion (based on 2017 levels) in additional U.S. goods and services over the next two years, including $32 billion in agricultural products and $52 billion in energy goods.  This was particularly good news for American farmers, and for the American taxpayers who provided offsetting support for lost crop sales to China. 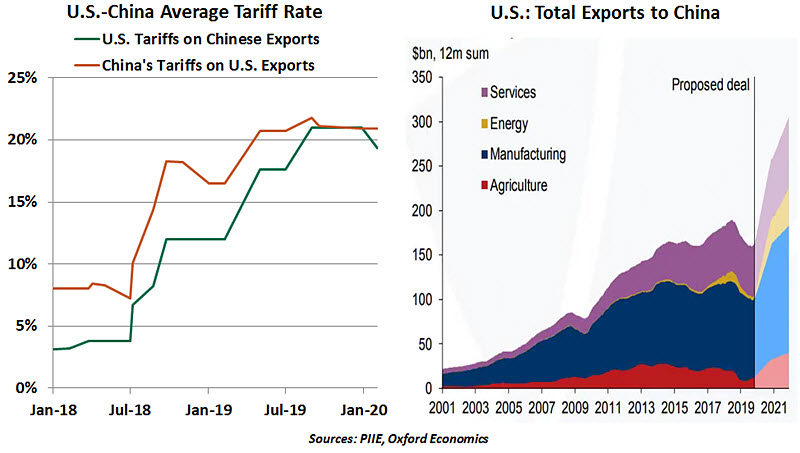 China has committed, at least on paper, to curb some business practices that caused friction with U.S. investors, including theft of intellectual property, counterfeiting and the forced transfer of technology to domestic competitors.  U.S. corporations doing business in China will gain a more level playing field, with greater access to the Chinese financial services market.  (Limits on foreign equity stakes and discriminatory regulatory requirements have constrained growth for American firms in China.)  China has also pledged to be more transparent in currency markets, in line with earlier commitments.

Phase One is a small step toward conflict resolution.  Both sides can claim victory.  But the deal is limited and fragile, without adequate checks and balances to prevent future flare-ups.  It fails to substantially bridge the gap between the two nations on key contentious issues.  We have concerns in the following areas: 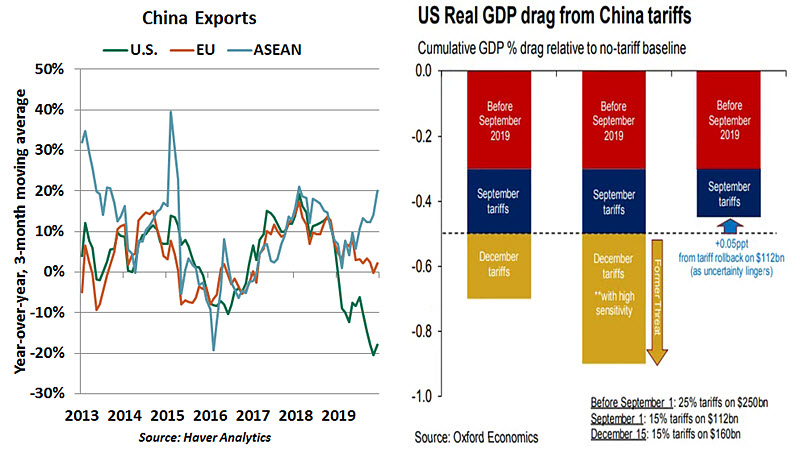 The trade war has weighed on both the U.S. and Chinese economies.  Bilateral trade has fallen by over $100 billion (over the trailing 12 months), damaging the firms who had been selling goods and services overseas.  The Chinese economy is slowing, and the health of its internal debt is slipping.  The U.S. manufacturing and farming sectors are also struggling.  According to a Federal Reserve estimate, China's economy will take a 0.4% hit in the long run, as American demand for its products declines.  On the other hand, a Congressional Budget Office study shows that tariff-related uncertainty and costs will shave 0.1% off of U.S. economic growth this year and reduce household income by 0.2%.

“The current deal is fragile, and the next phase is a long way off.”

Overall, the primary benefits of the Phase One accord are intangible, reducing uncertainty and improving confidence.  According to Oxford Economics, this partial rollback of tariffs will only restore 0.05% of U.S. growth in 2020.  Trade policy uncertainty will remain a headwind.  Damage to both countries and the global economy will endure.

The path to Phase One was tumultuous, and with so much at stake, the road to Phase Two will only be rougher.  Both sides must make concessions to reach an agreement that eventually leads to peace.  Let’s hope the delicate ceasefire will be followed by a peace treaty.

For Richer, For Poorer

Economic performance, in the United States and globally, far exceeded expectations during the decade just closed.  Ten years into the expansion, equity markets have flourished: the benchmark Standard and Poor’s 500 index nearly tripled in value from the beginning of 2010 to the close of 2019.  In aggregate, we could hardly have hoped for better.

But there are countries, and populations within countries, that have not kept pace.  They have expressed their frustration at the ballot box, supporting populist movements.  Unless and until their concerns are addressed, geopolitics will remain volatile.  This places the issue of economic inequality front and center.

Measuring inequality is central to an assessment of the issue and to the formulation of prospective policies that might address it.  Unfortunately, sizing the gap between those doing well and those who are not as well off is exceptionally difficult.  Controversy over the calculations has been intense, and parochial.

A trio of French economists has been at the forefront of recent efforts to quantify inequality.  Thomas Piketty created a stir with his 2013 book “Capital in the Twenty-First Century.”  In an attempt to avoid controversy over his calculations, Piketty made them public; but analysts found serious problems with his math, undermining his conclusions.

Emmanuel Saez and Gabriel Zucman, economists at the University of California at Berkeley, published a book last year with a more pointed title: “The Triumph of Injustice: How the Rich Dodge Taxes and How to Make Them Pay.”  Within, they offered new calculations of the disparity between the top 1% of the population and everyone else.  Almost immediately, critics on both sides of the ideological debate pointed out flaws in their assumptions and discounted their conclusions.

It is not as easy as you might think to determine what people earn.  Tax returns are the primary source, but these can be incomplete.  According to the U.S. Internal Revenue Service, approximately 16% of tax liability goes uncollected each year, with underreporting of income by farmers, sole proprietors and property owners a key contributor.  Some households receive government transfers that are not taxes, such as public health insurance.  These are also absent from tax records.

Further, the cumulative income reported in U.S. tax returns is only about 60% of national gross domestic product (GDP).  An important element of the gap is pension and other retirement accounts, which generate tax-deferred earnings.  Saez and Zucman have attempted to close these gaps, but the basis they used to make their adjustments has attracted substantial criticism.

Formulations from conservative economists (such as Americans Gerald Auten and David Splinter) find that income concentrations for the top 1% have increased only modestly over the last generation.  Work by the Congressional Budget Office falls somewhere in the middle.

Measuring wealth is even more difficult, given that little public information exists on what people own.  Many assets are hard to value, and liabilities (like debt) have to be netted against them.  Saez and Zucman have used reported investment income to impute wealth levels; but without detail on what is held, this technique is highly imprecise.  The resulting error in calculation undermines the case for a wealth tax, and overstates the potential revenue derived from such a tax.

Finally, it is hard to judge the data on incomes or wealth solely on the surface.  A certain amount of inequality is endemic to any economic system: those willing to work harder and take risks should, over time, do better.  Many economists therefore are more interested in reinforcing equality of opportunity, as opposed to correcting inequality of outcomes.

After all is said and done, the preponderance of evidence indicates that the degree of economic inequality in the United States has risen over recent decades.  The obsessive focus on the top 1% obscures more fundamental differences between top deciles and those below.  This issue will be central to the 2020 U.S. presidential campaign.

Scientists often approach a problem with certain beliefs that can shape their assumptions and the resulting outcomes.  For a serious issue like economic inequality, it is especially important to get the numbers right before jumping to conclusions.

Last year, central banks worldwide acted preemptively to continue economic expansions, a trend that has led to speculation that monetary policy will need to give way to fiscal policy.  But in Canada, we have seen the opposite approach at play: A central bank holding interest rates steady as fiscal policy changes to support consumers.

Canada’s fiscal policy was shaped in part by its election last year.  Prime Minister Justin Trudeau won a close reelection on a platform including middle-class income tax cuts, childcare benefits and student debt relief.  The government has begun a phased reduction in personal income taxes and is pledging to expand the availability of dental care to low-income Canadians.  Combined with a small business tax reduction in 2018, the Canadian economy’s fiscal conditions are positive. 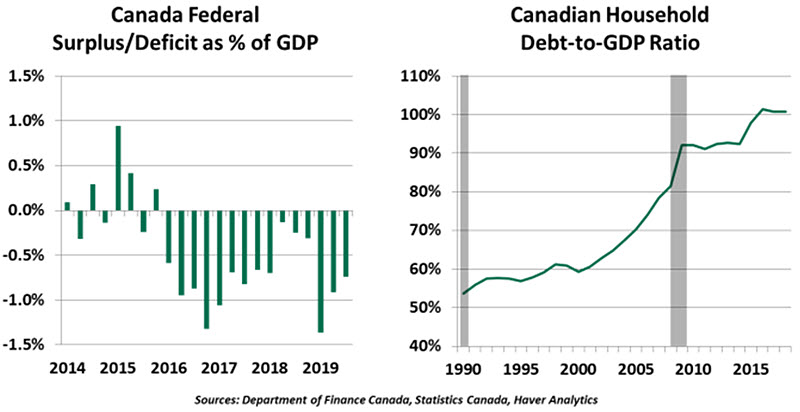 The stimulus was needed.  Canada faced uncertainty as its largest trading partner, the United States, threatened to change the terms of trade.  The ratification of the U.S.-Mexico-Canada Agreement (USMCA) will remove some downside risk, but trade uncertainty remains elevated.  Housing prices, especially in Canada’s major cities, grew unsustainably throughout the decade; this created a debt burden that has pinched household budgets.  Job creation has been unsteady, with a net loss of over 71,000 jobs in November of last year.  Even as environmental concerns have kept Canada from exporting energy to its full capacity, low oil prices have limited the profitability of energy extraction.  And the costs of stimulus will only add to the government’s deficit.

This week, the Bank of Canada (BoC) again held rates steady but lowered its growth forecast and suggested a possible rate cut to come.  Since 2015, the central bank has not wanted to add fuel to ascendant house prices and has stayed away from an accommodative interest rate policy.  In the year ahead, especially with a new governor taking the helm in June, the BoC may need to grow more dovish.  But the Canadian government’s willingness to act through fiscal policy has helped to stave off a recession, a playbook that many other countries have room to follow.

2020 Outlook: Some Reality After the Rally