Investors tend to think of floating-rate bank loans as the cure for rising interest rates. But our research suggests that a rising-rate environment has historically been the worst time to buy loans.

This may seem strange. High-yield bank loan coupons adjust periodically based on changes in short-term interest rates. That means they don’t lose money the way fixed-rate bonds do during rising-rate environments.

Remember, though, that bank loans are credit assets—and what they lack in interest-rate risk they more than make up for in credit risk. Like other types of credit, they often do well in the late stages of a credit cycle, when rising rates haven’t risen high enough to choke off growth. That’s where we are today.

In fact, it’s not uncommon to see loans outpace other types of credit in this environment, because they’re insulated against the effect of rising rates. For instance, loans returned 3.6% through August 31. High-yield corporate bonds, which carry some interest-rate risk, delivered about 2% over the same period. (This isn’t always the case. Last year, loans trailed high-yield bonds, largely because high demand drove credit spreads and yields lower, allowing borrowers to refinance at lower rates.)

But exposure to bank loans at this late stage of the credit cycle is risky, because they tend to do poorly once the cycle turns, growth slows and defaults start to rise. The Fed’s latest round of tightening began in 2015, and we think we’re getting closer to the turning point. To avoid large drawdowns, investors would have to reduce exposure just before the cycle turns—a tall order for even the most seasoned investors.

In fact, history suggests that the best time to buy bank loans isn’t when rates are rising but after growth has slowed, the Fed has reduced interest rates and companies have started to clean up their balance sheets and repair their credit metrics.

Getting the timing of an investment right is no easy feat, of course. But our research suggests that knowing the average bank loan price at a given time can help. That’s because a high average loan price has usually coincided with strong demand, rising interest rates and a growing economy. On the other hand, average prices usually declined when rates were low or falling and the economy was weak.

We looked at the month-end average price of bank loans in the Credit Suisse Leveraged Loan Index between January 1992 and May 2018, then calculated the return over the next two years. For example, when loans were trading at $98.50 or above at a given month-end, they delivered an average of 2.8% over the subsequent two years.

High-yield bonds fared a little better, generating a subsequent return of 3.7% during the same periods. But here’s the part that may surprise some people: The five-year US Treasury beat both high-yield investments handily, with an average return of 6.2%. The reason? Credit valuations usually become stretched in the later stages of a credit cycle. When the cycle turns, prices correct, rates begin to fall and interest-rate–sensitive assets such as Treasuries outperform.

So what about when loan prices were low? As you might expect, bank loans did much better. During months when the average price was $88 or lower, bank loans produced an average return of 12.1% over the next two years—more than double the five-year US Treasury’s return of 5.5%. But high-yield bonds did even better, returning 20.5% (Display). 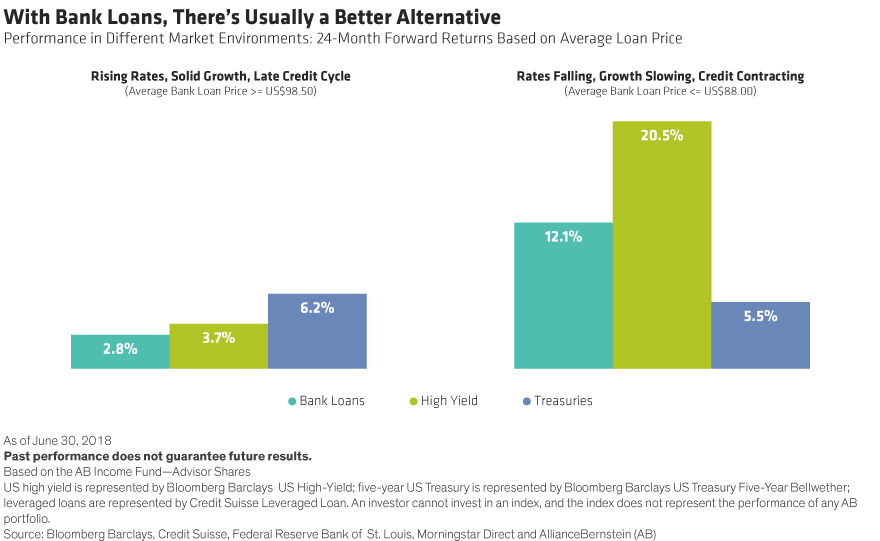 Bank Loans Are Getting Riskier

We think it’s possible that bank loans will suffer a particularly severe downturn when the current cycle turns. A big reason for that: the quality of today’s bank loans has declined. This is partly because strong demand has been promoting lax lending and sketchy supply. Lately, borrowers have been offering less covenant protection for lenders. Before the global financial crisis, less than 20% of the high-yield bank loan market was what’s known as covenant lite. Today? It’s around 75% and growing.

Bank loans have also surpassed high-yield bonds as the most popular way to finance leveraged buyouts—the riskiest type of corporate takeover. This trend suggests that default risk is a lot higher than many investors realize. And when those defaults happen, we think recovery rates are likely to be a lot lower than they’ve been in the past.

As rates continue to rise, we think investors should be gradually reducing exposure to credit assets such as bank loans and increasing it to interest-rate–sensitive assets such as US Treasuries and other high-quality government debt. These types of assets typically outperform when credit cycles turn. Once higher rates have slowed the economy and provoked declines in credit assets, investors can sell some of their outperforming interest-rate–sensitive assets and add credit exposure at more attractive prices.

We understand that some fixed-income investors are hesitant to take on interest-rate–sensitive assets while rates are still rising. But in the long run, rising rates are good for bond investors, because the income they generate in the form of higher coupon payments can be reinvested into new and higher-yielding bonds.

The way we see it, the best way to balance your allocation is to pair the two types of assets in a single “barbell” strategy, with high-yield bonds anchoring the credit side of the portfolio and intermediate-duration US Treasuries anchoring the interest-rate side.

With credit assets looking expensive—and with the US credit cycle in its twilight stage—we think now is an especially ill-advised time to bet big on bank loans.

Is the corporate bond market overheating? Look at the lenders.

Into the Unknown: Positioning Portfolios for an Unpredictable World - Context