Is the era of easy financial conditions over? Not yet, says Russ.

Recently, U.S. interest rates hit multi-year highs and the dollar came back from the dead. From the February low to Monday’s high the DXY Dollar Index gained approximately 6.5%. At the same time, long-term U.S. interest rates are back to their early 2014 peak; two-year Treasury rates are at their highest level in roughly a decade. Together, higher rates and a dearer currency both represent a tightening of financial market conditions.

Still, despite these developments stocks have bounced, with the S&P 500 up 5% from the May low. How is it that stocks are rallying despite tighter financial conditions? Strong earnings are part of the answer. But apart from a stellar earnings season, the simple truth: Financial conditions have actually become easier in recent weeks.

1. The dollar is still down year-over-year

While the dollar rally has been abrupt, it has also been short-lived. The dollar has advanced roughly 5% between mid-April and mid-May, but that rally only puts it back to where it was in mid-December. On a year-over-year basis the dollar is still down approximately 4% (see Chart). 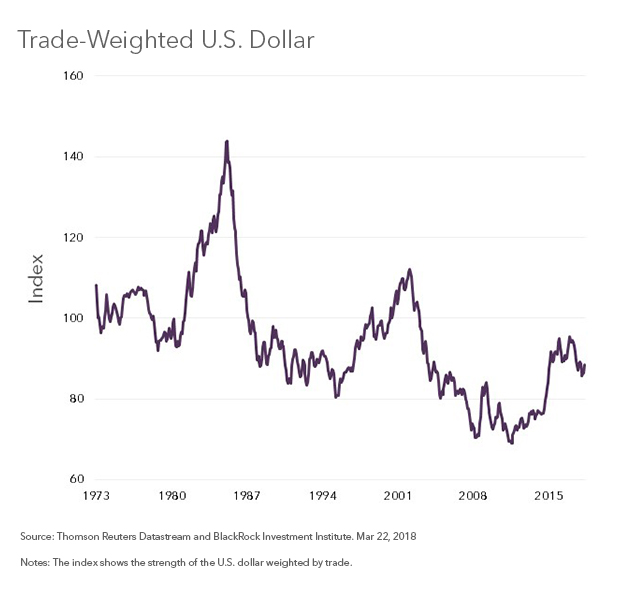 Equity market volatility in February and March never did spread to credit markets. As a result, high yield spreads remain extraordinarily low, approximately 180 basis points below the 20-year average. Unlike during the growth scare in early 2016, credit markets have remained remarkably calm throughout the recent bouts of volatility.

The resilience of equities

The fact that financial conditions have actually eased goes a long way towards explaining the resilience of equities. As I’ve discussed in previous blogs, the price investors are willing to pay for a dollar of earnings is in large part driven by the cost and availability of money, i.e. financial conditions.

Historically, easy financial conditions, particularly low volatility, have been associated with higher valuations. Depending on the exact measure used, in the post-crisis environment the level of financial conditions has explained between 25% and 35% of the variation in the S&P 500’s price-to-earnings multiple.

In other words, while U.S. stocks are still not cheap, a premium valuation is easier to maintain in a world of still cheap money and low volatility.