Richard shares seven investing ideas to consider as 2018 gets underway.

We see three key themes shaping economies and markets in 2018: Room to run, inflation comeback and reduced reward for risk.

The first focuses on our outlook for a steady expansion. The second calls for an inflation re-awakening in the U.S. and heralds monetary policy divergence. The third acknowledges 2017 will be a tough act to follow: Risk-taking may still pay off, but the rewards will likely be skinnier.

What are the investing implications? We cover a number in our 2018 Global Investment Outlook, and here are seven to consider.

Take risk in equities over credit

We believe investors can still be compensated for taking risk in 2018—but will receive lower rewards. We prefer to take risk in equities rather than credit, given tight credit spreads, low yields and a maturing cycle. Economic expansion supports both stocks and corporate debt, but equities offer greater upside than credit as the cycle matures, we believe. U.S. credit spreads against Treasuries are near their mid-2000s lows. Such tight spreads mean that even a small selloff can wipe out credit’s extra income over government bonds. We see credit offering coupon-like returns, making it a useful source of income potential. But when bonds trade near or over par, as they do today, there is little potential price upside. In contrast, a solid economic backdrop and increasing profitability should drive equity returns in 2018, even as we see earnings momentum weakening.

What a year 2017 was—for corporate profitability. All major regions increased earnings at a clip faster than 10%, Thomson Reuters data show, the strongest growth since the post-crisis bounce. We expect more good things in 2018, but year-over-year increases will be harder to replicate. Still, we see the economic and earnings backdrop as positive for equities, with fuller valuations a potential drag, especially in the U.S. Equities in Japan, the only major region to see multiple contraction in 2017, look well positioned. Japan may be hard-pressed to repeat its surprisingly strong earnings showing in 2018, but steady global growth, robust trade and commodity price stability should be supportive.

EM equities had a tiger in their tank in 2017, ending years of underperformance versus developed peers. We believe they can run higher. We see the potential for EM stocks to again outperform in 2018 on rising profitability, higher valuations and investors returning to the asset class. Companies have reduced wasteful investments, and our math finds free-cash-flow yield for non-financials exceeds that of developed markets (DMs) for the first time since 2007. Return on equity has finally been improving and valuations have been rising. We see scope for more EM rerating in 2018, whereas the U.S. and Europe have much less headroom. Other reasons to like EMs: reform progress in key markets and plenty of capacity for investors to increase exposure after years of underweighting the asset class. We see the greatest opportunities in EM Asia but note positive progress in Brazil and Argentina, as discussed in Early innings for emerging markets from November 2017. We do not see moderate Federal Reserve tightening or U.S.-dollar gains harming the investment case, and we believe EM economies can withstand a moderate slowdown in China.

Financials would likely benefit from U.S. deregulation, and any yield curve steepening could boost lending margins. Meanwhile, even as technology was the top-performing sector globally last year, we see opportunity there, particularly in firms that are able to monetize their technology amid structural shifts. Overall, strong fundamentals make the tech sector favorable over the long term, in our view.

The momentum factor has historically outperformed in expansions, but we believe diversifying across factors can help cushion any dips. The momentum factor reigned in 2017, and our outlook for a steady, sustained expansion should support the momentum factor going forward. Momentum has historically outperformed the broader market over time, and periodic sharp reversals have typically been short-lived—except in cases of recession or financial crisis. But we also like the value factor, home to cheaper companies across sectors and could outperform in any momentum selloff, if the long history of negative correlation between the two factors is any guide.

Be selective in credit

We prefer an up-in-quality stance in credit amid tight spreads, low absolute yields and poor liquidity. Low growth and inflation expectations, coupled with insatiable global demand for income, have held down long-term yields across the world. We expect income-starved and safety-seeking investors to keep chasing relatively scarce G3 bonds—holding rates well below historical averages. The global search for yield has driven many fixed income investors into unfamiliar territory, leading them to embrace more credit risk and even venture beyond the bond markets—not just into dividend-paying equities but also into selling equity options. The risk inherent in these strategies rises disproportionately as credit spreads narrow, so we favor an up-in-quality stance and emphasize liquidity.

Prefer inflation-protected over nominal bonds, especially in the U.S.

We see inflation in the U.S. rising back to a 2% target—a turnaround from fears of near-zero inflation or even deflation two years ago. Rising inflation and lower valuations give inflation-protected bonds an edge over the nominal variety.

Read more details on our investment views in our full 2018 Global Investment Outlook and in the table below.

Views from a U.S.-dollar perspective over a three-month horizon 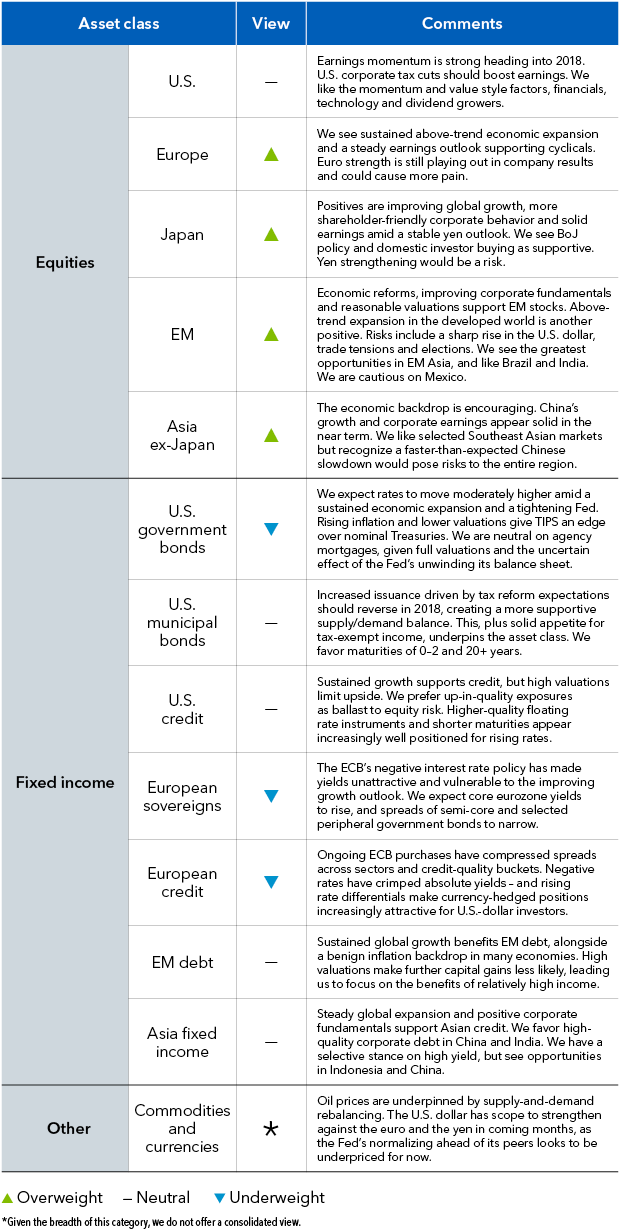 Richard Turnill is BlackRock’s global chief investment strategist. He is a regular contributor to The Blog.

As Sands Shift, Bond Investors Struggle to Keep Their Footing