India: Country at a Crossroads

At a glance, the Indian stock market is one of Asia’s top-performing markets, and would normally be associated with a strong macroeconomic backdrop and robust corporate earnings. Fundamentally, however, the picture is quite different.

In this environment, fiscal consolidation is unlikely as the government continues to heavily support economic recovery. Reform in this area is not sufficient as the government does not have the budget to bail out public sector banks, which would require approximately $90 billion, and private investors are unlikely to be able to provide the necessary level of equity. 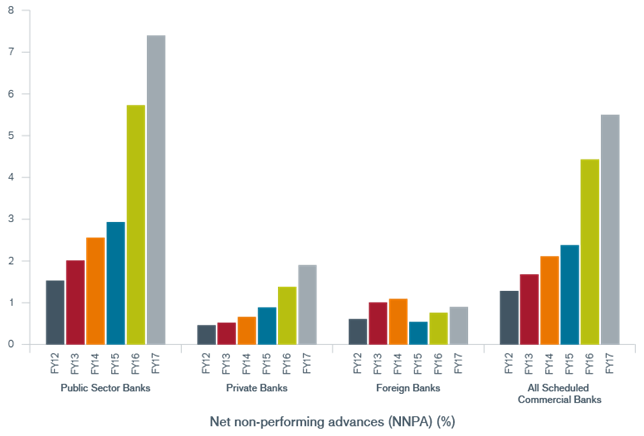 Additionally, the political agenda continues to be a key driver of fiscal policy in India.

Agriculture only makes up 15% of India’s economic activity, but supports over half of the population. A recent series of announcements by various state governments to waive some farm loans has prompted farmers to stop repaying their loans. The farm loan waiver was also a political consideration as it helped Prime Minister Narendra Modi’s Bharatiya Janata Party (BJP) win the recent Uttar Pradesh election.

Moreover, there is tension between the government and the RBI, which is displaying real independence, as the choice of the new central bank governor suggests that Modi is having a hand in steering the central bank toward the government’s quest for lower interest rates.

Another crucial factor weighing on India’s outlook is the disappointing pace of reforms that was promised during Modi’s appointment in 2014. The banknote demonetization decision in 2016, which, despite early reservations, ended up being fairly well received. The move seemed to have established Modi’s reputation as a champion against corruption. But while one of Modi’s key strengths has been his adaptability, it has also been a hindrance to sustained reform.

There is no avoiding the stark statistics in India today. There are, for example, only 39.1 million taxpayers out of a population of 1.3 billion, and more than 12 million new job-seekers entering an overcrowded workforce every year, according to the Asian Development Bank. While the central government has addressed some of its earlier priorities, e.g., reforms in terms of deregulation, foreign direct investment (FDI), bankruptcy and government service tax (GST), the onus is now on the all-powerful chief ministers of individual Indian states to pick up the baton and address labor and land reform to ensure sustainable growth.

In summary, due to the current combination of economic issues, rising bad corporate debt, the slow pace of reforms, and a less than supportive political agenda, coupled with stretched valuations in a period where earnings are being downgraded and macroeconomic fundamentals are weak, we see value beyond India, including countries such as China, South Korea and Taiwan.

Foreign securities are subject to additional risks including currency fluctuations, political and economic uncertainty, increased volatility, lower liquidity and differing financial and information reporting standards, all of which are magnified in emerging markets.

Normalizing the Fed's Balance Sheet – Not So Fast