This week in the SIA Equity Leaders Weekly, we are going to update our October 20th, 2016 analysis of the Mexican Peso vs the US Dollar and take a look at the aftermath of the US elections and the ongoing US politics affecting this relationship. Second, keeping with a North American theme, we will have an updated look at the S&P/TSX Composite Index as it continues to strengthen with the index on the verge of all-time highs

During our last look at the MXNUSD currency pair just weeks away from the US election we commented on the interesting metric many have noted, that if you want to know how the US Presidential Election is going you can forget about the opinion polls and just take a look at the Mexican Peso. The foreshadowing of a Donald Trump Presidency with the currency slide came to a head with the eventual win; the following reactionary movement in the currency suggested that the anticipated protectionist policies would have a negative impact on trade prospects with Mexico and therefore the currency.

Moving forward into 2017, the erosion of the peso continued and reached a historical low on January 19; the next day however, to the shock of many and just a day before the inauguration we saw one of the peso's best single-day performances rebounding by almost a full percent. Since that day just over a week ago, the currency continues to climb up from lows not only against the US dollar, but also the Euro. The Mexican peso has definitely presented itself as one of the more interesting currencies to watch in 2017.

Looking at the chart, as mentioned we can see the MXNUSD bounced off of all time lows this month around $0.0450 and has been in a new column of X’s now approaching resistance at the $0.0500 level. The peso has a huge uphill battle in front of it and will find major resistance above $0.0500 at $0.0550, and then higher at $0.0586. To the downside, the crucial support level is at recent lows at $0.0450, which again would take the currency into unknown parts. With an SMAX of 1 out of 10, the MXNUSD is showing no signs of short term relative strength versus the asset classes.

It will be interesting to see how this currency pair continues to trade in 2017. Further strength could be made possible if President Trump happens to soften some of his tones but another elephant in the room will be US Federal Reserve interest rate policy which will also affect this relationship. 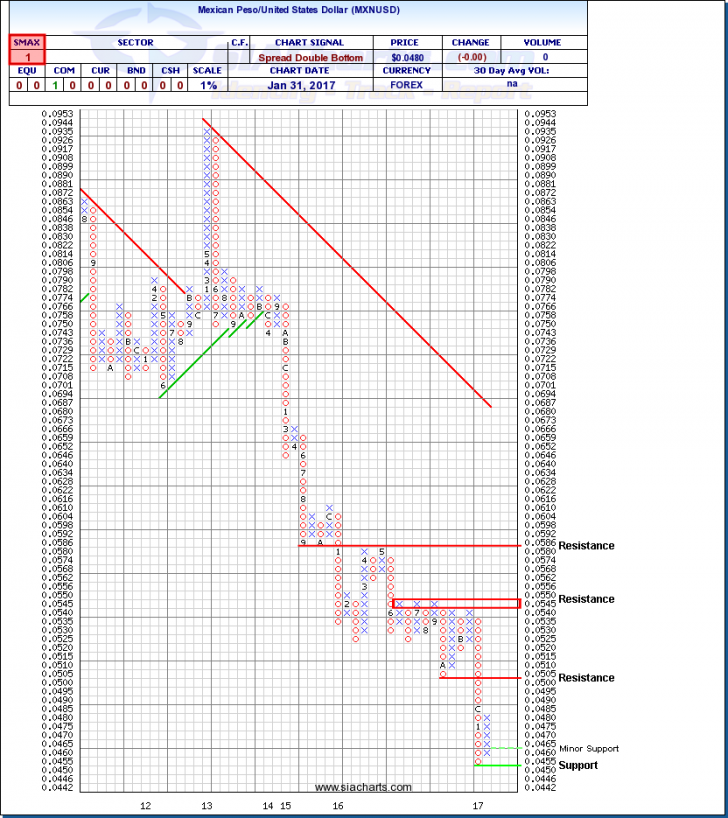 Last week on Wednesday January 25, 2017 as the Dow Jones Industrial Average topped 20,000, the S&P/TSX Composite closed just shy of all-time highs. The Canadian index momentarily crossed its record close of 15,657.63 which it reached back on September 3, 2014, in the morning of that day before pulling back later that afternoon. In the past week, the index has pulled back a bit but is still holding in a strong column of X's.

Looking at the chart, the TSX.I has been in a long column of X’s since late January 2016 and is now trying to get past a very strong resistance level at those all-time highs. A potential break into these uncharted waters will likely find new resistance through the 16,500 area. To the downside, support can be found at 14,000 and below at 12,700. With an SMAX of 8 out of 10, the TSX.I is showing near term strength versus most of the asset classes. 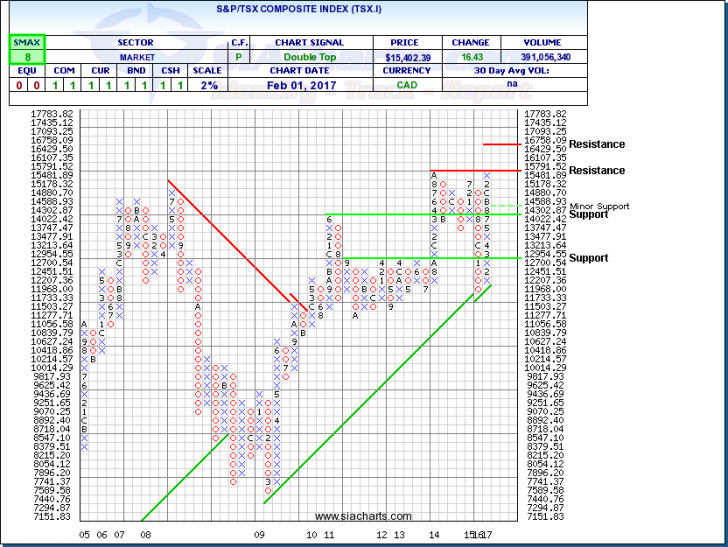 So Goes January, So Goes The Year?