Keeping Your Balance During Shaky Markets

While capital markets have had their ups and downs, it’s been at least 15 years since we’ve seen such a broad swathe of the global markets take a hit at the same time—risky and “risk-free” assets alike.

What’s most disconcerting for investors is that the part of their portfolio that likely has provided some stability historically—US Treasuries—appears to have been part of the volatility this time. Not many of today’s investors have had the experience of getting through a period of such instability, let alone using it to their advantage.

The catalysts for this volatility include recent US Federal Reserve comments regarding tapering its bond-purchasing program, indications of slower growth ahead for China’s economy, euro-area indecisiveness, political turmoil from Brazil to Turkey and slowing growth in many emerging markets. A lot of these catalysts boil down to fears about the future rather than a focus on present positives. After all, Fed Chairman Ben Bernanke’s vision for gradually weaning us off easy monetary policy was based on the growing consistency of upbeat economic data.

But no matter the underlying cause, the markets have reacted with alarm, which makes it difficult for investors to decide what to do.

In more typical markets, diversification has kept investors on a steady course, with US Treasury bonds serving as ballast for portfolio stability. Even within the bond market, diversification has typically been a wise approach. That’s because there are two major risks in the bond market: interest-rate risk and credit risk. When the economy is shaky, the highest-quality securities, such as US Treasuries, generally tend to perform well. In times of economic growth and rising interest rates, high-yielding credits often shine. If an investor combines high-quality and high-income bonds in a balanced, barbell approach, their bond portfolio has the potential to weather most markets.

The operative word, though, is “most.” That barbell approach hasn’t fared well in the past two months. Is it dead? Some investors may think so, but we don’t.

Yield spreads and interest rates have historically moved in opposite directions, so when rates have risen, spreads have tightened and credit has outperformed. Right now, they’re moving together—meaning that government and credit prices are falling at the same time. This is a relatively rare occurrence.

We compiled data (see display below) looking at time periods of 29 business days—the number of business days from the start of the current sell-off—from Monday, May 13 through Friday, June 21. The chart shows the many times between 1992 and today when there have been similar 29-day periods in which five-year US Treasury yields sold off by 60 basis points or more. In the majority of these periods, the yield spread between five-year US Treasuries and high-yield bonds declined or was flat. In a few instances, the spreads widened, but these were mostly in overlapping periods in August 2003 and May 2004. The only time that spreads widened significantly (the large diamond at the upper left of the chart) was during the May 13–June 21 sell-off of 90 basis points.

Interestingly, when we look at five-year rate increases of over 80 basis points, spreads have never widened in the past 20 years. We think that the current relationship isn’t likely to last long, but we believe spreads are beginning to look very attractive at these levels. Of course, in the short run, investor behavior will influence whether this situation reverses sooner rather than later. 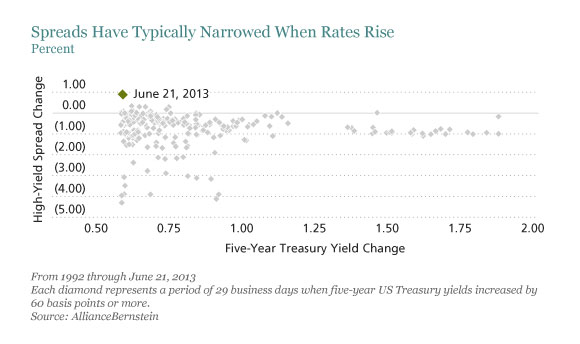 In any case, a credit barbell approach has fared rather well for the past 20 years, despite three other highly stressed macro-driven environments. The only time the barbell approach didn’t work was in 1994. The other major crisis periods were bad for this approach, as they were for almost every bond strategy, but that was primarily due to massive credit sell-offs.

Still, the barbell approach has additional strengths to call upon—even in the midst of a crisis.

We’ve seen numerous interest-rate and credit cycles over the past 20 years—and even several global and systemic credit crises. But strong credit selection going into a crisis and opportunistic allocation into more distressed sectors during a crisis gives the barbell approach the capability to potentially rebound strongly.

Every new market gyration or crisis is different, but every one of them is also an echo of the past. We believe that the best response to any situation is having a strategy that lets you keep your balance.

The views expressed herein do not constitute research, investment advice or trade recommendations and do not necessarily represent the views of all AllianceBernstein portfolio managers.

Is There Life After BRICs for Emerging Market Investors?