Back to Business For Now ... (Quarterly Strategy Report)

Back to Business For Now ... Quarterly Strategy Report

In this report [download PDF], we outline our strategic and tactical portfolio positioning strategies for the fourth quarter using various BMO Exchange-Traded Funds.

- After much speculation, the U.S. Federal Reserve Board (Fed) finally officially announced its third round of quantitative easing (QE3) on September 13. Given this round was highly telegraphed, we believe a significant amount of the market reaction has already been priced in compared to its two predecessors. As a result, it is likely the effect on risk assets will be short- lived this time around. However, over the quarter, inflationary assets will likely be driven higher.

- Concerns of an immediate European sovereign debt crisis appeared to have abated, after the announcement of the European Central Bank’s (ECB) Outright Monetary Transactions programme (OMT). Five-year yields of Spanish and Italian debt had declined to as low as 4.2% and 3.7% respectively in early September. However, recent austerity strikes in Spain have caused yields to rise, and measures of the European economy such as Purchasing Manager’s Index (PMI)1 continue to contract, now at 46.0, below the critical 50 level, suggesting significant concerns about the European economy still remain.

- China also remains a concern, as data suggests its economy continues to contract. Despite an announcement from its economic planning body that it has approved a US$157 billion infrastructure expenditure, its PMI continues to indicate that the economy is deteriorating. Given both the direct and indirect exposure to China’s economy through Canadian equities, our strategy has been to use a core-satellite approach, combining lower beta stocks with cyclical areas exposed to the U.S. economy.

- Investor sentiment dramatically improved over the third quarter, with the CBOE/S&P Implied Volatility Index (VIX)2 falling to a low of 13.3, a level not seen since June 2007 and well below its long-term average of 20. Put/call ratios for the S&P 500 Composite (SPX) have also been on the decline, further indicating that investor confidence has improved, for the time being.

- U.S. equities continue to deliver positive surprises on earnings (ahead of expectations), though a closer look shows much of this continues to be cost cutting. The earnings surprises with stocks in the SPX have been more impressive than that of the S&P/TSX Composite (S&P/TSX) as per the table below.

- The key risk remaining outside the OMT program in not being an effective measure in removing a tail-risk event over the quarter is the looming U.S. fiscal cliff, which will be partly dependent on the upcoming U.S. Presidential elections. If concerns of Europe stay on the sidelines, investor focus would more than likely shift to the U.S., where at year end tax and spending cuts are set to expire. This could potentially be a major setback to the global economic recovery. As a result, even though we have slightly increased the cyclicality in our tactical strategy, we remain defensive from a strategic and overall level. 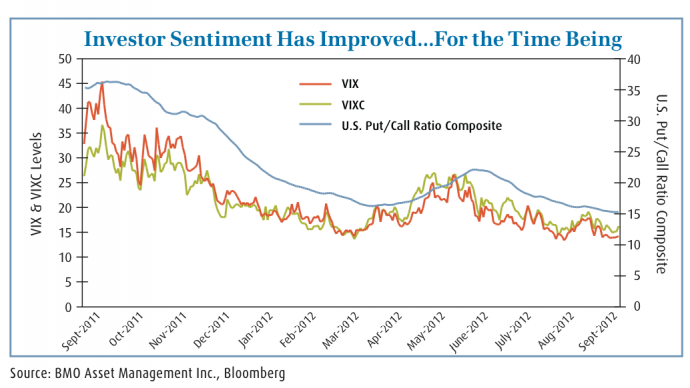 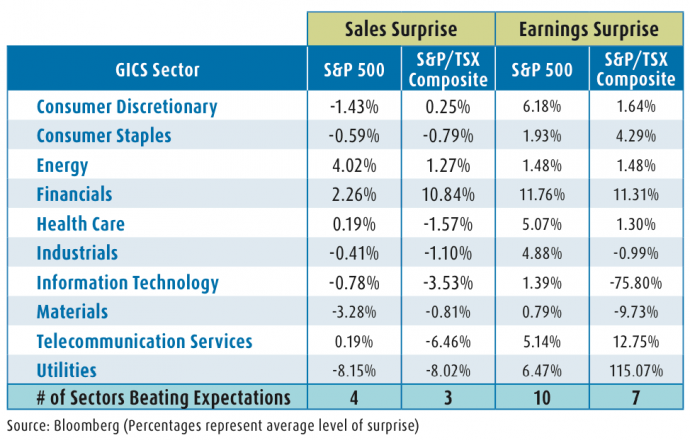 Things to Keep an Eye on... 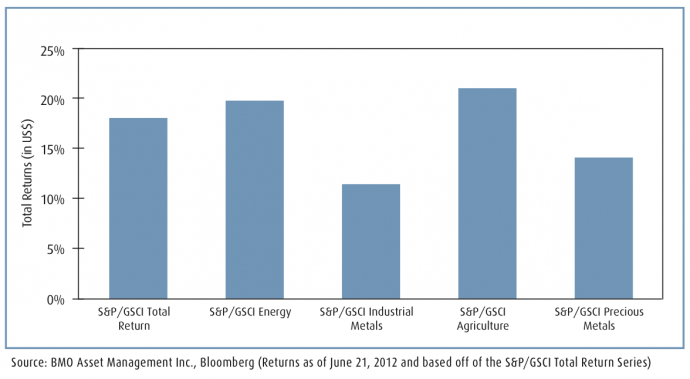 Interest in commodities as an investment has been placed on the backburner over the last year, given increased volatility and waning optimism for global growth. However, with market anticipation for central bank intervention, commodity prices have surged 18.2% since June 21, marking a short-term rotation into inflationary assets.

Recommendation: As the commodity sub-groups react very differently to macro-economic events and monetary stimulus, we recommend targeting the commodity exposure in your portfolio strategy. Gold and silver prices have reacted favourably in past periods of QE, as did oil prices. For energy exposure, oil and gas companies remain attractively valued and pay a dividend. The BMO Precious Metals Commodity Index ETF (ZCP) can be used for precious metals exposure and the BMO Equal Weight Oil & Gas Index ETF (ZEO) for energy company exposure. 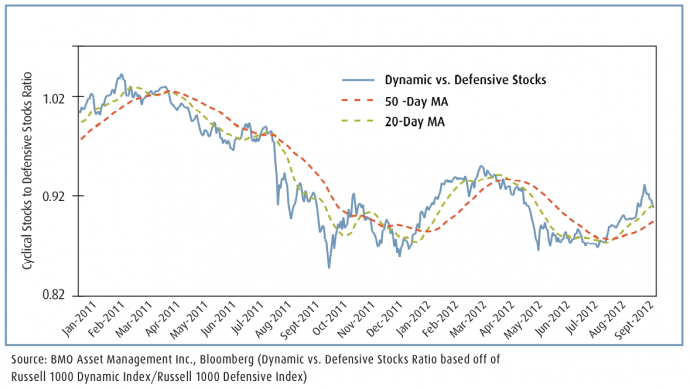 Cyclical stocks have been rallying against defensive stocks since July, after Mario Draghi asserted to the market that he would “do whatever it takes” to save the Euro.Speculation through the summer that the Fed would announce monetary stimulus, and the announcement of the ECB’s OMT program, also gave fuel to the rally in riskier assets, as depicted by the recent trend in the Dynamic vs. Defensive Stocks Ratio.

Recommendation: We still favour lower beta equities over the long-term and still continue to recommend the BMO Low Volatility Canadian Equity ETF (ZLB) as a core position. The recent turn downturn in the Dynamic vs. Defensive Stocks Ratio confirms our view of that risk appetite will eventually abate. 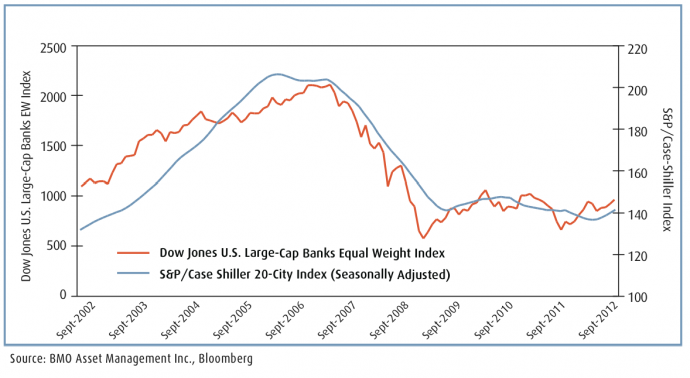 U.S. housing, ground-zero to the 2008 financial crisis, continues to show signs of stabilization. This is encouraging given it was a source of employment and wealth to the U.S. economy from 2004 until the financial crisis. A recovering U.S. housing market would provide a lift to many U.S. banks and financial firms.

Recommendation: As a tactical position, the BMO Equal Weight U.S. Banks ETF (ZUB) can be used to provide exposure to financial firms in the U.S. which have been highly correlated to the health of the U.S. housing market. As depicted in the chart to the left, the Dow Jones U.S. Large-Cap Banks Equal Weight Index (C$ Hedged), which ZUB tracks, has been correlated to the S&P/Case Shiller 20-City Index (Seasonally Adjusted).

Changes to the Portfolio Strategy:

- We are slightly increasing the equity exposure of the asset allocation mix in our strategy, as the recent moves by both the Fed and ECB is supportive for riskier assets over the short-term. In addition to adding to our equity exposure, we are also slightly increasing the cyclicality within the stock component of our strategy, which is outlined in more detail in the following sections. As the core of our strategy remains defensive, we are utilizing tactical positions to increase our exposure to areas that are more sensitive to the effects of stimulus. However, we do not believe the low levels in equity market volatility (and VIX) are sustainable given the breadth of macro-economic and geo-political concerns that remain. A major concern over the next quarter on asset allocation is the impact of the U.S. elections and also the U.S. fiscal cliff.

- Our fixed income strategy continues to use a core-satellite approach with the BMO Aggregate Bond Index ETF (ZAG) to gain exposure to the broad Canadian bond universe. More targeted fixed income ETFs are then added to tilt the fixed income exposure in terms of duration and credit. Although the Bank of Canada continues to take more of a hawkish tone in monetary policy compared to its international counterparts, many factors including high unemployment and the loonie trading above parity may delay rate hikes until the latter part of 2013. As a result, we are eliminating our position in the BMO Short Federal Bond Index ETF (ZFS) and repositioning it to increase our weighting in the BMO Mid Corporate Bond Index ETF (ZCM). Equities:

- Over the last quarter, there has been a remarkable improvement in the breadth of the market rally. Currently, 71.7% of the SPX stocks are trading above their 50-day moving averages (MAs), compared to only 61.8% at the end of the second quarter. Although the Eurozone economies will likely continue to struggle, the effectiveness of the OMT in keeping countries like Spain and Italy out of the headlines will be critical in determining whether the market rally continues over the fourth quarter. Though no panacea to their economic woes, like the Long-Term Refinancing Operations (LTRO)3 it kicks the proverbial can down the road.

- The Dow Jones Industrial Average was our preferred means of obtaining exposure to broad U.S. equities in 2011. As we have recommended several times earlier this year, however, recent signs of “on-shoring” and improving U.S. economic data has benefitted the more locally based mid-cap companies in the SPX. As a result, we are eliminating our 9% position in the BMO Covered Call Dow Jones Industrial Average Hedged to CAD ETF (ZWA) and placing 6% to increase our position in the BMO S&P 500 Hedged to CAD Index ETF (ZUE)4.

- The remaining 3% from eliminating ZWA, will be used to initiate a new position in U.S. financials since the sector is exposed to an improving U.S. economy and a stabilizing U.S. housing market, as mentioned in the previous page. Furthermore, on a sector basis, U.S. financials are trading at attractive fundamentals relative to both their historical price-to-earnings (P/E) ratios and compared to the SPX. In addition, we are trimming 2% from ZAG, to add 1% to each of our BMO Canadian Equity Dividend ETF (ZDV) and the BMO Equal Weight REITs Index ETF (ZRE) positions. There remains a secular demand for yield and the recent under-performance of dividend equities and REITs may be an opportune time to accumulate.

- As previously noted,a number of factors continue to be a tailwind for precious metals right now. Both the ECB’s OMT program and the Fed recently adding monetary stimulus will be supportive of gold and silver prices. In addition, gold prices tend to be seasonal, gaining an average 6.7% in the fourth quarter over the last ten years. From a  technical perspective, gold has broken out of its downtrend pattern that it has been in since the end of the first quarter, with faster indicators such as stochastics turning up as well, showing a gain in momentum. Its recent technical strength potentially leads to more buyers coming into the market. As a result, we are taking 1% from cash to add to our BMO Precious Metals Commodities Index ETF (ZCP). Below we outline all of the respective changes to the portfolio. 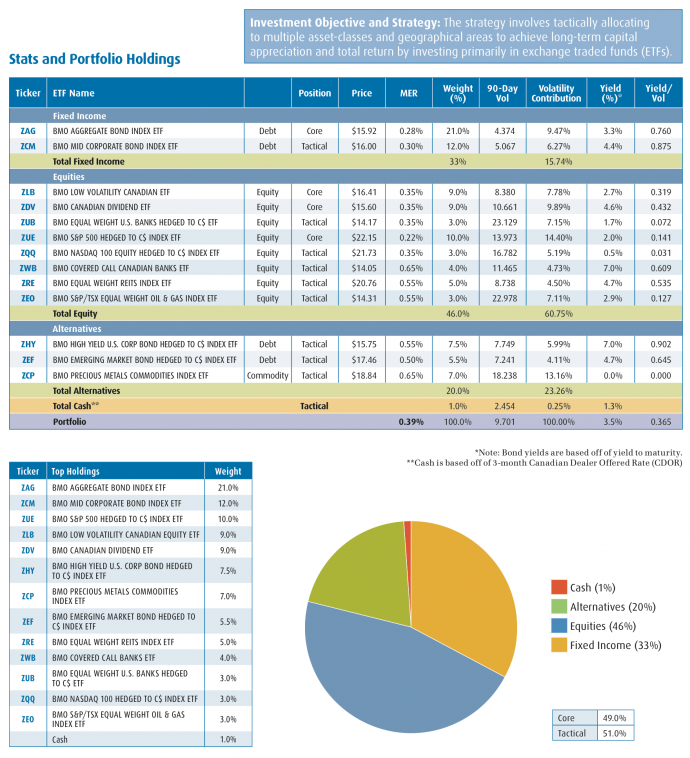 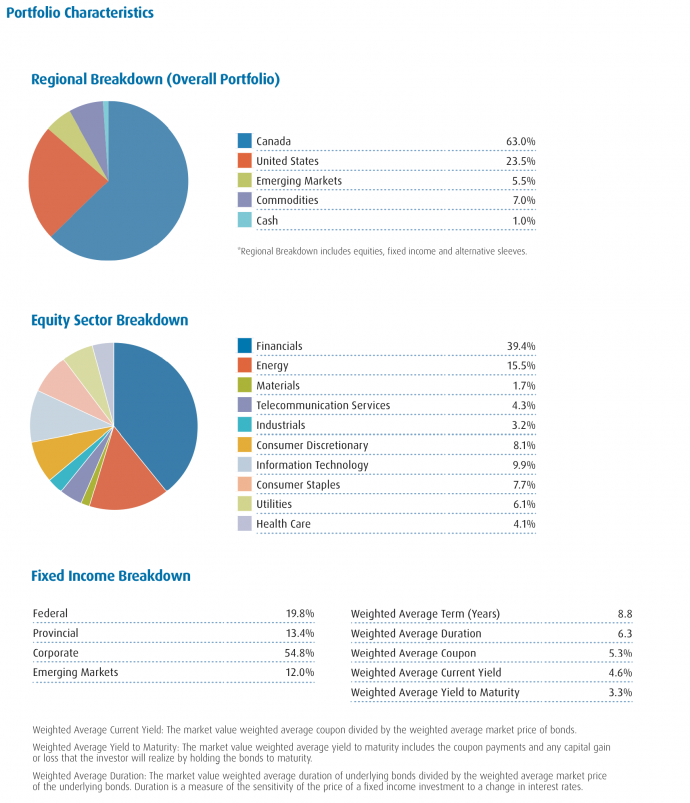 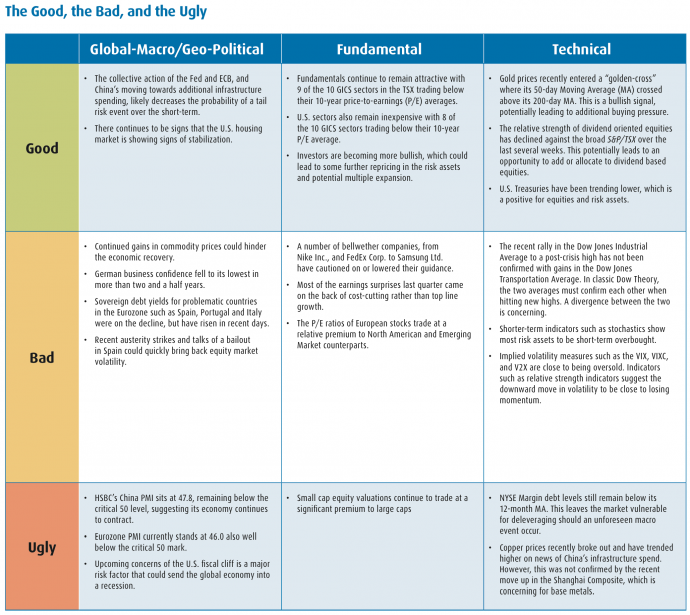 Conclusion: Though very short-term indicators suggest a consolidation, the recent actions by the central banks are supportive for risk assets. A combination of an increased appetite for risk and attractive fundamentals leads buyers coming back into the market and potential further short-covering. The major concern that eventually leads to a headwind later in the quarter is the U.S. “Fiscal Cliff.” Although we slightly increased the cyclicality in the tactical portion of our strategy we will use the recent underperformance in lower beta and yield oriented areas as accumulation opportunities for the strategic portion of the strategy. Overall our ETF portfolio strategy remains defensive.

1 CBOE/S&P 500 Implied Volatility Index (VIX): shows the market’s expectation of 30-day volatility, annualized. It is constructed using the implied volatilities of a wide range of S&P 500 index constituent options. This volatility is meant to be forward looking and is calculated from both calls and puts. The VIX is a widely used measure of market risk and is often referred to as the “investor fear gauge”.

2 Purchasing Managers’ Index (PMI) is an economic indicator on the financial activity reflecting purchasing managers’ acquisition of goods and services. Data is for the PMI are compiled by monthly surveys polling businesses that represent the make up of the respective sector. The surveys cover private sector companies, but not the public sector. A number above 50 indicates economic expansion, whereas a number below 50 suggests economic contraction.

3 Long-Term Refinancing Operations (LTRO): a major financing method used by the European Central Bank to provide liquidity to its member banks. Although the operation has been in existence for well over a decade, its rules were recently revised to make it considerably easier for banks to obtain funding. First, through LTRO banks can now post collateral to borrow funds for three years rather than several months. Second, the eligible collateral to obtain funding has been relaxed significantly.