The Danger of HY ETF’s Trading at Discounts to NAV

Alcoa helped the markets bounce back after the close, and some indications that the ECB may start buying bonds again helped the market even more. One company’s earnings don’t make a trend, and I am still concerned that earnings will be mediocre at best. Spanish bonds are already off their highs, and CDS never really moved on the back of the ECB stories. I remain skeptical that anything meaningful will be done, and now that we have the “ECB” rally out of the way, I expect to see the weakness resume. In the TFMkts Best Ideas which went out earlier, we liked adding to shorts this morning.

The fact that the High Yield ETF’s are trading at a discount should be a big concern to anyone in the high yield market, not just those who own the ETF. There is a real risk that this discount can translate into arb activity which leads to further declines.

With the ETF’s trading at a discount, the trade would be to sell bonds in the market and to buy shares. They would then deliver the shares to the ETF providers as a “redemption” and take the bonds to cover the ones they shorted. Although this has the appearance of being risk neutral, my experience is that it can become a big driver. I also don’t think many HY bond traders or ETF desks have seen this scenario play out in the credit markets. We saw a bit of it on the way up, many of the shares the ETF’s “created” were for ETF arb clients, but on the way up, where those participants were buying bonds, no one seemed to care much. In a downside scenario it can be far worse.

I will walk through a rough example of what used to happen in CDS with “index” arb, and I don’t see what it wouldn’t apply to the ETF’s if they remain at a discount.

Assume there are two virtually identical companies and most of the time their CDS trades roughly in line. Then one day you notice that over the past week, both went from trading at about 90, to one trading at 100, and the one that is in the index trading at 110. Many accounts will look at this and determine that it doesn’t make sense. They may sell protection on the name at 110 thinking the market has moved “too far too fast”. They may put a “pairs” trade on and buy the one at 100 and sell the other at 110. Neither are bad trades, but what they have missed, is the overall weakness in the market (that saw even the non index name to move 10 bps wider) has been priced into the CDX indices. They are say trading at 115, in spite of fair value being 110 for example. They tend to trade “rich” or “cheap” to fair value based on market sentiment. Hedgers in particular like to be “temporarily” short the liquid index, while retaining specific (and usually less liquid) credit bets.

The “index arb” clients will come in and pay 110 for the “index” name, while selling the index at 115 (it is more complicated than that, but that is the basic premise). The “arb” trader doesn’t care if 110 is a “good” or “fair” price for that CDS, they only care that they can buy all the names in the index at a spread tighter than where they can sell the index. That is it. They have no interest in buying the name that trades at 100. They only care about the richness or cheapness of the index versus the single names.

What tends to happen next, is hard to explain, but seems to happen all the time. The single name traders who sold protection feeling it had gone too far, start having difficulty finding sellers to take the other side. They are getting long credit risk. What do they do? They buy protection on the index because somehow it makes them feel better than just closing out their position. Effectively single name desks put on the opposite trade as the arbs. Doesn’t make sense, but happens all the time. So by buying the index as a hedge, they ensure that it continues to trade cheap, meaning that the index arbs will be back to buy more of the single name.

But why won’t others sell that name or put on the pairs trade? The problem here is that the spread between the index and non index name continues to widen. So after some decent sized arbs go through, the names now trade at 105 and 120. Anyone who sold at 110, thinking to make 10 to 20 bps, just lost 10 bps. What is the probability that a) they add more, b) they sit tight, or c) they get stopped out on some? I can almost guarantee that option a is the lowest probability. Similarly, anyone who put on the “pairs” trade at 10 bps, is now down 5 bps since the spread is 15 (and that ignores bid/offer). These people are more likely to add to the position, but even there, people start getting nervous that there is something really wrong with the one company. That fear creeps in. In credit, being wrong means instead of earning 1.1% per annum you lose 60%. That fear, whether rational or not, makes it difficult to find sellers of protection.

So the “cheapness” of the index feeds on itself and creates a feedback loop that drives all spreads wider. The index names get hit the worst, but everything moves. It doesn’t end usually until the index is at a level that new entrants come into the market to sell the index, which is not only at a good level, but very cheap to fair value.

I am very concerned that this same process can occur in the HY bond market and liquidity, as bad as it is in a strong market, is far worse in a down market. As of yet there is no sign that this is happening in a meaningful way, but JNK has seen outflows for a few days and HYG saw outflows yesterday. 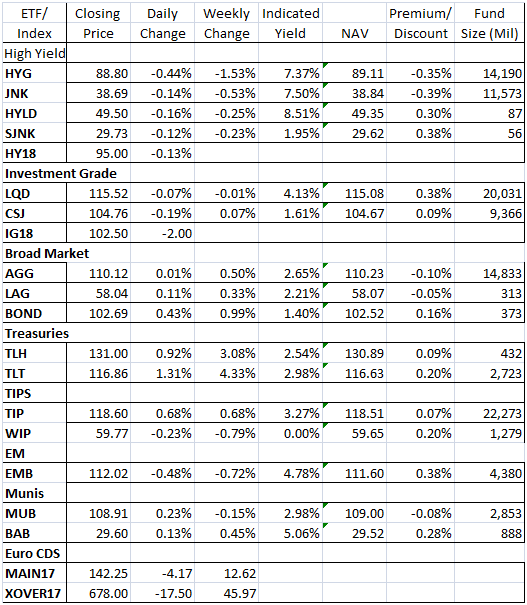 Spain is A Mess, No Matter How You Slice It

Does the Rally Still Have Legs? (Lee)