A return to prominence it may not be, however year-to-date U.S. equities have rebounded as one of the best performing broad markets. While questions still remain about the ailing U.S. economy and particularly its ballooning deficit, the U.S. private sector has often been overlooked by Canadian investors. Being the epicentre of the 2008 financial crisis is likely a major reason why Canadians have steered clear of U.S. equities, looking perhaps to better prospects at home due to Canada’s strong banking and commodity related companies. In addition, the continued slide of the U.S. dollar against most major currencies, particularly the loonie, further compounds reasons for avoiding investments in U.S. companies.

Before we move on to discuss why we have been bullish on U.S. equities coming into the 2011, a closer look at currency issues is warranted. Any non-domestic investment by a Canadian can be decomposed into two sources: the return on the underlying asset and the return on the currency. As many investors north of the border may recall, currency can have a large impact on an investment. Back in 2007, when the loonie made a strong ascent to as high as US $1.0865, many saw their otherwise positive investment either negatively impacted or negated by the currency impact. As with any currency, its strength is driven by a number of factors including the soundness of a country’s balance sheet, political stability and interest rate differentials, to name a few. In addition, the current characteristics of the market place has led to a number of currencies being recognized by the market as safe-havens and others as currencies that tend to appreciate in-line with risk taking.

The Canadian dollar, despite being backed by “the World’s Most Sound Banking System1” tends to react like a risk currency because of our heavy tilt to commodity exports. Oil and base metals, as an example, tend to rise in times when investors are confident about the prospects of global economic expansion and thus, at those times, natural resources will be in higher demand. The greenback on the other hand has a tendency to trade like a safe- haven currency despite a ballooning deficit and so too does the Japanese yen with its extreme debt/GDP ratio. This odd behaviour is partially due to the two currencies role as funding currencies in carry trades.2 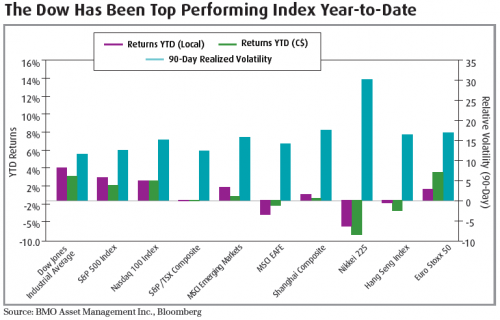 Currently, with the higher likelihood of the Bank of Canada raising lending rates before the U.S. Federal Reserve, the greenback’s role as a funding currency could be further exacerbated and could cause commodity currencies such as the loonie to drift higher, if equity market volatility continues to decline. As we believe global economic conditions are improving and expect higher interest rate differentials between the U.S. and Canadian dollar to widen, we continue to favour currency hedged products, especially when looking at U.S. related investments. 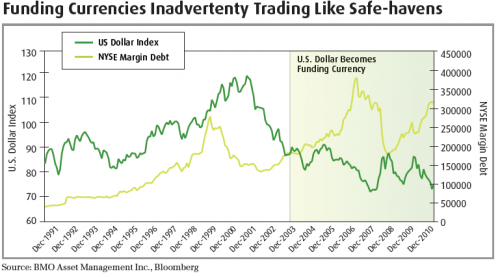 - Short- to mid-term tailwinds. In our BMO ETFS: 2011 Outlook Report published in January, one of our major asset allocation calls was paring back emerging market equities in favour of U.S. equities. We later issued a BMO ETF: Trade Opportunities report on January 20, 2011 to our subscribers titled “Dissecting the Dow,” which recommended obtaining U.S. equity exposure through the Dow Jones Industrial Average (Dow). We were extremely bullish on emerging markets coming out of the recession to the end of 2010 and we still believe the developing economies to be a secular story. For the time being however, we believe emerging market equities will further face headwinds, despite the rising middle class in Brazil, Russia, India and China (BRICs) and also the Asia-Pacific region. As a result, large multi-national companies of the Dow may be of consideration as they provide indirect exposure to this demographic while avoiding emerging market weakness. Furthermore, U.S. multinationals have a tendency to perform well when the greenback weakens. The short-to-mid-term however, we believe U.S. equities could continue to outperform as they look favourable from each of a macro-economic, fundamental and technical perspective, addressed further below.

- Macro-Economic Factors: Despite the worse than expected U.S. jobless numbers reported in early May, investors should remain focused on the big picture, rather than one-off numbers. The global economy continues to strengthen and we believe this to be bullish for equities over the long-term despite short- term volatility shocks. The sharp sell-off we witnessed in commodities several weeks ago may also be of concern, however, this is what the economy needs. Lower oil prices are an economic stimulus that does not stress a government’s balance sheet and in addition it helps large multi-national companies operate more efficiently. The recent drop in oil prices is exactly the risk premium that we warned was built into crude from the Middle-East concerns. With the recent passing of Osama Bin-Laden, that potentially leaves Muammar Gaddafi as the sole focus of the U.S.

Running of the Bulls ... into Hibernation