November gave investors reason to be thankful, including a bucket of good-enough economic news that contributed to a second consecutive month of gains.

Better-than-expected inflationary data and signals from the Federal Reserve (the Fed) that its interest rate hikes may soon slow – even as they continue – likely played a role. A typical end-of-year seasonal rally and the conclusion of midterm elections may have also done their parts to push us forward.

“Certainty is always more attractive to investors than uncertainty, so regardless of who wins, the end of midterms is usually greeted with a mild increase in stock values,” Raymond James Chief Investment Officer Larry Adam said. “Meanwhile, corporate earnings were better than feared; jobs, retail sales and durable goods numbers were healthy; and it’s clear that a 2022 recession, once feared by some investors, won’t arrive.”

The result was that the S&P 500 rallied for the second consecutive month for the first time since July and August of last year. Treasury yields also saw a strong rally, with 10-year notes falling from around 4.2% to 3.7%. This pushed the gap between the 2-year and 10-year note to its most inverted level – when short-term yields exceed long-term – since 1981.

Still, the housing market is reflecting the effects of higher financing costs with lower demand, which will likely lead to downstream discomfort, and several economic indicators suggest a coming 2023 recession, even if mild.

Before we get into exploring the other topics that contributed to November’s result, let’s take a look at where we stand for the year. 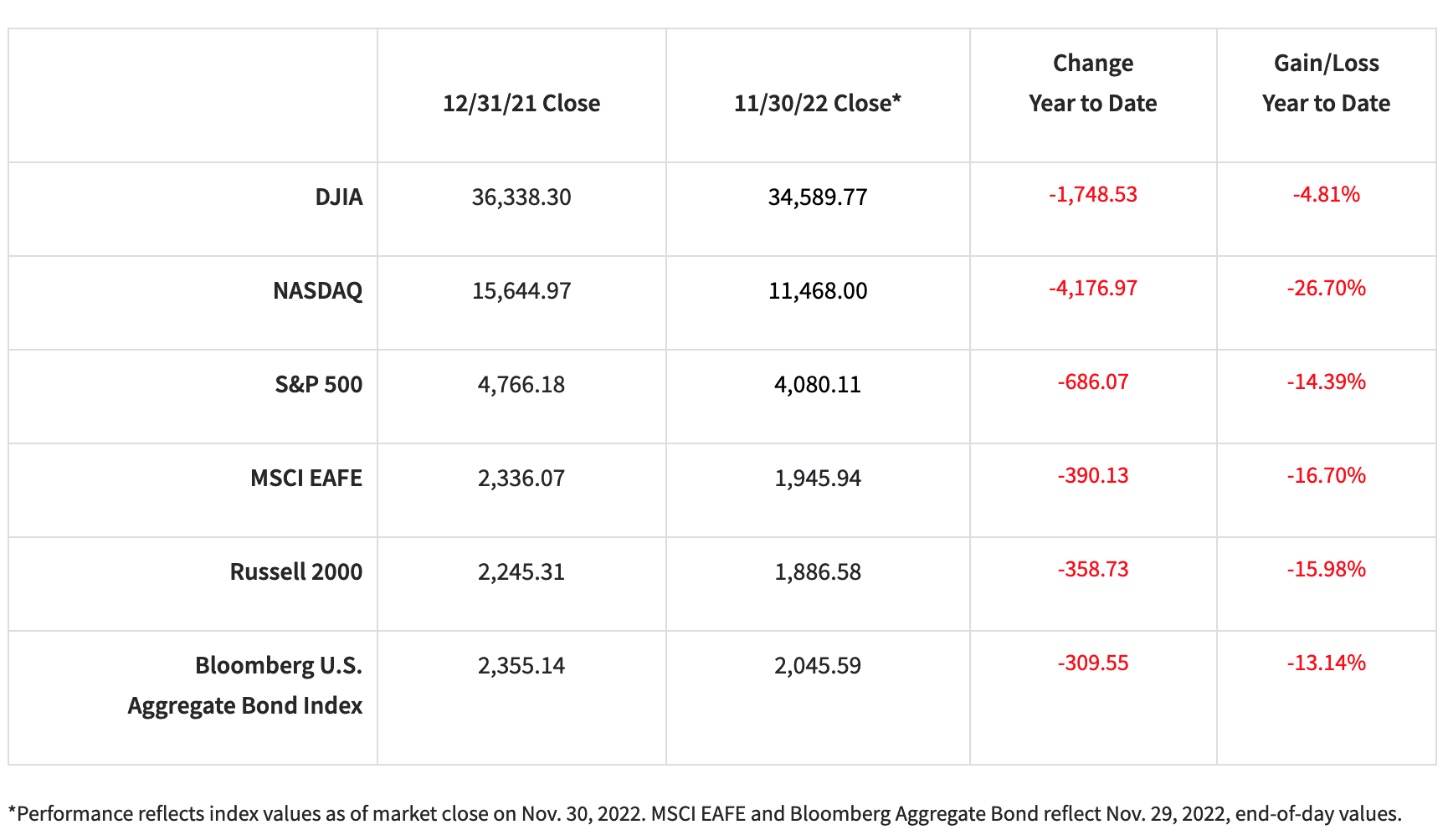 A three-hour meeting between President Biden and Chinese President Xi Jinping at the 2022 G-20 Summit symbolized a return to the table and a slight easing of tensions despite significant disagreements, particularly surrounding the status of Taiwan. Biden described the goal of U.S.-China relations to be one of competition without conflict.

Buybacks and dividends on the march

With one month to go, stock buybacks have already set a single-year record and are expected to exceed $1 trillion by the end of the year. Dividends are also expected to hit a record high. These actions, over time, should increase the attractiveness of equities.

On Nov. 1, the start of the winter heating season, Europe’s natural gas stores were nearly full at 95% capacity, a turn of events in contrast with dour summertime projections. This highlighted the failure of Russia’s strategy to use its natural gas exports for geopolitical leverage and may have contributed to supporting a partial recovery of the euro against the dollar. Still, natural gas prices in Europe remain at near record levels, which is not economically sustainable over the long run, highlighting the need for energy diversification, including more renewable power.

Despite a rash of high-profile Technology sector layoffs, the count of new hires and new claims for unemployment benefits shows that the labor market continues to be tight. As has been the case, this is counter to what would have been expected in light of the Fed’s economy-cooling efforts.

Lame ducks on the move ahead of a split Congress

With a year-end funding bill and the National Defense Authorization Act on the docket, the lame-duck period will be a busy one. Still, expect Democrats to try to preempt the looming debt ceiling debate to keep a lever away from the incoming House Republican majority, though reluctance from key members of the House Democratic Caucus may be impossible to overcome in time.

While better inflation data and the Fed’s softening language are encouraging, investors should expect more challenges ahead, especially as the lagging, cumulative effect of higher interest rates catches up. It’s also worth reiterating that the Fed will likely continue to raise rates into the foreseeable future, even if they do it at a slower pace, and this will continue to be a headwind for markets.

It’s too early to say whether we’ve seen the worst of the bear market, but evidence gives reason to look toward 2023 with some cautious optimism.

If you have any questions, please do not hesitate to reach out to your financial advisor.

Investing involves risk, and investors may incur a profit or a loss. All expressions of opinion reflect the judgment of the authors and are subject to change. There is no assurance the trends mentioned will continue or that the forecasts discussed will be realized. Past performance may not be indicative of future results. Economic and market conditions are subject to change. The Dow Jones Industrial Average is an unmanaged index of 30 widely held stocks. The NASDAQ Composite Index is an unmanaged index of all common stocks listed on the NASDAQ National Stock Market. The S&P 500 is an unmanaged index of 500 widely held stocks. The MSCI EAFE (Europe, Australasia and Far East) index is an unmanaged index that is generally considered representative of the international stock market. The Russell 2000 is an unmanaged index of small-cap securities. The Bloomberg Barclays US Aggregate Bond Index is a broad-based flagship benchmark that measures the investment grade, U.S. dollar-denominated, fixed-rate taxable bond market. An investment cannot be made in these indexes. The performance mentioned does not include fees and charges, which would reduce an investor’s returns. Bond prices and yields are subject to change based on market conditions and availability. If bonds are sold prior to maturity, you may receive more or less than your initial investment. Holding bonds to term allows redemption at par value. There is an inverse relationship between interest rate movements and bond prices. Generally, when interest rates rise, bond prices fall and when interest rates fall, bond prices generally rise. Investing in the energy sector involves special risks, including the potential adverse effects of state and federal regulation, and may not be suitable for all investors. Investing in commodities is generally considered speculative because of the significant potential for investment loss. Those markets are likely to be volatile, and there may be sharp price fluctuations even during periods when prices overall are rising. International investing involves special risks, including currency fluctuations, differing financial accounting standards, and possible political and economic volatility.