The Fed announced a 75bps rate hike, vowing to forcefully tackle inflation, while conceding the path to a soft landing has become "more challenging."

As (newly) expected, the Federal Open Market Committee (FOMC) raised the fed funds rate by 75 basis points, the first hike of that size since 1994. That puts the fed funds target range at 1.5%-1.75%. There was one dissent—Kansas City Fed President Esther George (typically a hawk)—in favor of a lesser 50-basis-point increase. The FOMC confirmed its previously laid-out plan on balance sheet reduction, which just began at the beginning of June—shrinking its holdings of Treasury and mortgage-backed securities by $47.5 billion per month until September, and then upping that to $95 billion per month thereafter.

The year-end forecast for the fed funds rate is now 3.4%, well up from 1.9% in March and now generally in line with market expectations. As shown in the "dots plot" below, after peaking at 3.75% next year, the Fed expects the rate will begin falling again, ending 2024 back below 3.5%, and 2.5% longer-term.

There were a few significant adjustments to the accompanying FOMC statement, including a new sentence that says the Federal Reserve (Fed) is "strongly committed to returning inflation to its 2% objective;" while simultaneously eliminating the prior language about expecting "inflation to return to its 2% objective and the labor market to remain strong." Although the opening line in the statement noted that "economic activity appears to have picked up after edging down in the first quarter," it's worth noting that just today, the Atlanta Fed's GDPNow forecast for second quarter real gross domestic product (GDP) fell from an anemic 0.9% to no-growth-now-expected (0.0%).

The summary of economic projections (SEP) were released, as they are at every March, June, September, and December FOMC meeting. The Fed's projections still suggest a soft landing, but a much bumpier one. We continue to believe a recession is more likely than a soft landing. As shown below, the Fed now expects the unemployment rate to increase from 3.7% at the end of this year, to 4.1% in 2024. It expects real GDP growth to be 1.7% this year and next year, down from 2.8% and 2.2%, respectively, in the March SEP. As shown below, inflation is still expected to come down significantly in 2023, but from 5.2% this year (instead of 4.3% in March's SEP) to 2.6% next year (instead of 2.7% in March's SEP). 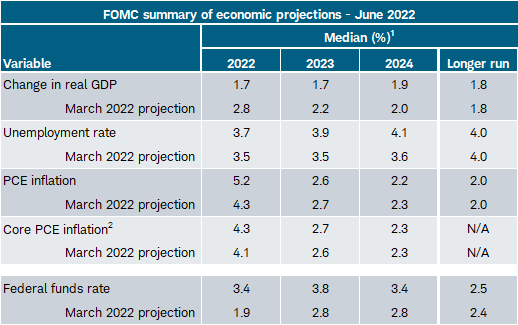 Note: Projections of change in real gross domestic product (GDP) and projections for both measures of inflation are percent changes from the fourth quarter of the previous year to the fourth quarter of the year indicated. PCE inflation and core PCE inflation are the percentage rates of change in, respectively, the price index for personal consumption expenditures (PCE) and the price index for PCE excluding food and energy. Projections for the unemployment rate are for the average civilian unemployment rate in the fourth quarter of the year indicated. Each participant's projections are based on his or her assessment of appropriate monetary policy. Longer-run projections represent each participant's assessment of the rate to which each variable would be expected to converge under appropriate monetary policy and in the absence of further shocks to the economy. The projections for the federal funds rate are the value of the midpoint of the projected appropriate target range for the federal funds rate or the projected appropriate target level for the federal funds rate at the end of the specified calendar year or over the longer run.1 For each period, the median is the middle projection when the projections are arranged from lowest to highest. When the number of projections is even, the median is the average of the two middle projections.2 Longer-run projections for core PCE inflation are not collected.

Frankly, the SEP is now a more realistic reflection of the bite of inflation on growth and less like the "immaculate tightening" cycle suggested with March's SEP, when they suggested that inflation pressures could ease without any meaningful impact on the labor market.

As usual, this report will cover the first 30-40 minutes of Fed Chair Jerome Powell's press conference. Here are the key takeaways:

Although the FOMC statement and the SEP pointed to the possible avoidance of a recession, we have a less benign view and believe the soft landing ship may have already sailed. The tightening in financial conditions continues to point to a meaningful economic slowdown; first-quarter real GDP growth was already negative, and now expectations for second-quarter growth are at the zero line. Powell reinforced that the Fed is "not trying to induce a recession," but it may be a necessary ingredient in the lower inflation recipe.

Is winter coming for the stock market?