Everything You Wanted to Know About Bear Markets

Leo Tolstoy’s Anna Karenina opens with one of the most famous lines in world literature: “All happy families are alike, but every unhappy family is unhappy in its own way.”

Similarly, we can say that all bull markets are alike, but every bear market has its own unique quirks.

As most of you know by now, the S&P 500 officially entered bear market territory on Monday after it closed more than 20% below the stock index’s all-time high set on January 3. The 50-day moving average has also fallen below the 200-day moving average, signaling a so-called “death cross.”

I believe this particular bear market has been in the works for months now. The economy is experiencing a major hangover from the trillions in liquidity that were printed to support businesses and consumers during the pandemic. Inflation is running rampant across the globe due to supply chain disruptions stemming from lockdowns, and investors are worried that central banks will act more aggressively than expected to put a lid on prices.

Today, in fact, the Federal Reserve hiked the interest rate by 75 basis points, the largest such increase since 1994, and the first time in recent memory that the bank has hiked at all during a stock bear market. A 50-75bp hike is expected at the next Fed meeting.

In past bear markets, it was sometimes simpler to identify the root cause. In 2020, it was pandemic lockdowns; in 2007-2009, the housing market meltdown (with an assist from a new accounting method, mark-to-market); in 2000-2002, the dotcom selloff.

I’m old enough to remember the Black Monday crash in 1987, when the S&P 500 fell more than 20% in a single session. Many people now blame computer trading and portfolio insurance, both still in their infancy and highly fallible. Because the U.S. economy was strong at the time, though, the bear market was relatively short-lived. (Remember, bear markets don’t necessarily lead to a recession.)

Key Characteristics to Keep in Mind

If there’s one thing we can say for certain, it’s that bear markets tend to come and go pretty quickly. Take a look at the table below. Going back to 1929, the average length of time bear markets have lasted is 324 days, or around 10 and a half months. The longest bear market was triggered in 2000 by the collapse in tech stocks, which was exasperated by 9/11 and the Enron scandal. The shortest bear market, at 33 days, occurred in 2020 due to the global response to Covid-19. 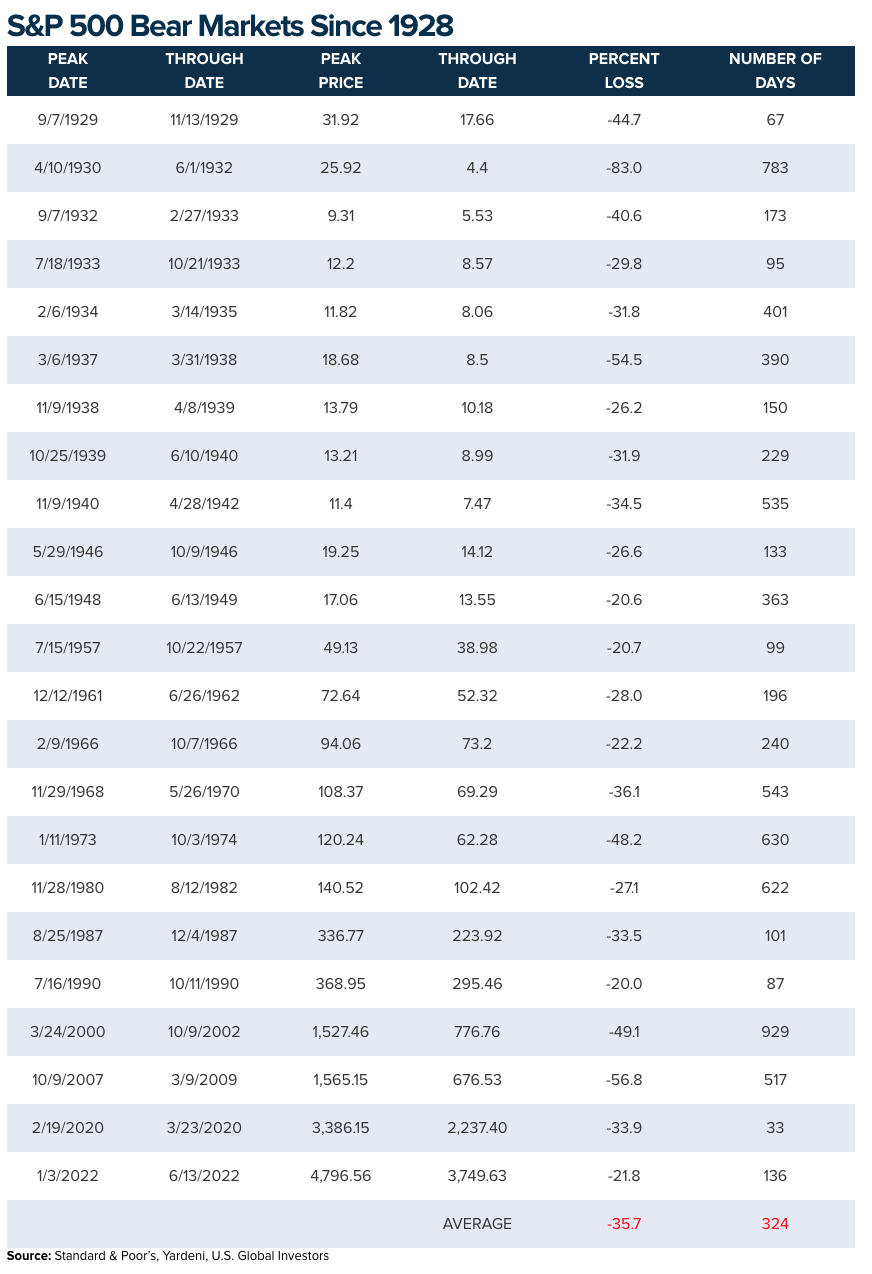 As you can see, bear markets are not rare even as stocks tend to be positive more often than negative. They occur every three and a half years on average. The question is not if but when the next bear market will happen, and that’s a big part of the reason why I always recommend a 5% to 10% weighting in gold and gold mining stocks and ETFs. To be fair, the gold price hasn’t fluctuated much in the past month—it’s trading around $1,825 an ounce at the moment—but, of course, that’s precisely the point. Compared to stocks and cryptocurrencies, gold has held on incredibly well.

Cryptos Facing Their Own Dotcom Reckoning

Bitcoin, Ether and nearly every other cryptocurrency are mired in their own bear market. Today, Bitcoin traded as low as $20,000, a significant discount from its all-time high of $68,925 set back in November 2021. Since then, the entire crypto asset class has lost a little over $2 trillion in market value as popular tokens such as LUNA have crashed to $0. As a result, crypto lender Celsius froze withdrawals this week and crypto exchange Coinbase announced an 18% workforce reduction.

Many crypto critics are gloating right now, and though the pain is real, I believe what we’re seeing is crypto’s 2000 dotcom moment. Just as no one now misses Pets.com, GeoCities and Boo.com, no one will miss many of the coins that won’t survive this selloff. Simply put, there are too many of them out there and too many traders buying on margin.

On a positive note, I’m convinced that the cryptos with real staying power will come out of this stronger than they were before. That was the case back in 2000 with companies like Amazon and eBay, and I believe it’s true now with Bitcoin, Ether and maybe a handful of others.

I would be remiss if I didn’t point out that we could see a treasure trove of buying opportunities open up, in stocks as well as Bitcoin. We may not have found a bottom yet, especially if inflation doesn’t show signs of tapering. I urge investors to stay diversified, add to their gold position if they can and, most important of all, stay positive. This too shall pass.

The S&P 500 is a stock market index tracking the performance of 500 large companies listed on stock exchanges in the United States. A basis point is one hundredth of 1 percentage point.

Holdings may change daily. Holdings are reported as of the most recent quarter-end. The following securities mentioned in the article were held by one or more accounts managed by U.S. Global Investors as of 3/31/2022: Amazon.com Inc.