Economic uncertainty may have peaked in the first half of 2022 but could still contribute to volatility and affect market performance for the remainder of the year.

Stocks around the world slumped during the first half of this year as economic uncertainty surged with the war in Europe, a lockdown-induced recession in Asia's biggest economy, stubbornly high inflation, and several major central banks pursuing the most aggressive series of policy rate increases in decades. Only the more commodity-driven markets of Canada, Australia, and the U.K. fared noticeably better than others, when measured in U.S. dollars.

Stock market losses defined the first half of 2022 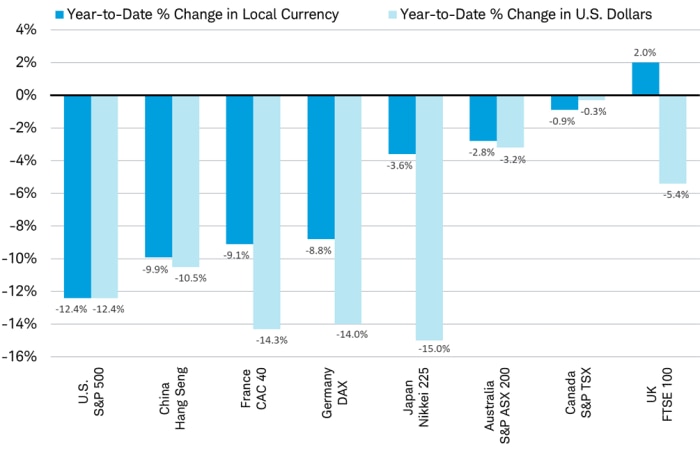 Performance data provided in local currency, and in U.S. dollars. Indexes are unmanaged, do not incur management fees, costs and expenses and cannot be invested in directly. Past performance is no guarantee of future results.

It's often said that markets hate uncertainty. In the first half of 2022, economic uncertainty in Europe was higher than during the height of the COVID-19 pandemic. Also, it was higher than any other time in the past two decades, except right after the Brexit referendum in June 2016, according to the Economic Policy Uncertainty indexes developed by Baker, Bloom and Davis. 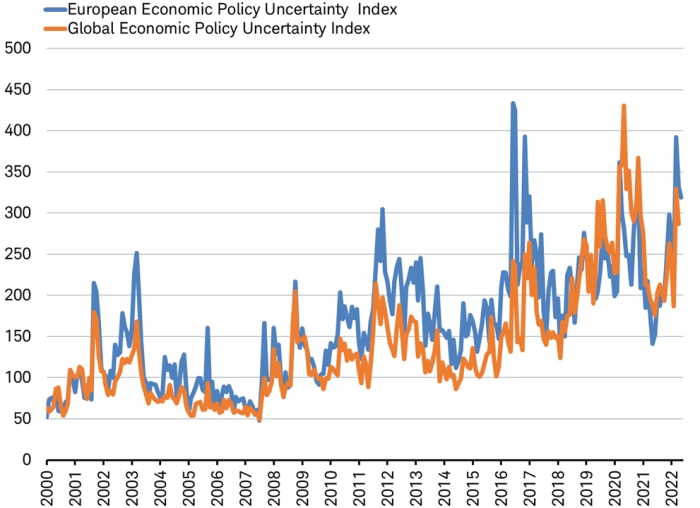 As the second half of the year drew near, there were some signs of easing uncertainty which seemed to help stocks rebound from their lows of mid-May.

While the modest easing in uncertainty was welcome news for investors in recent weeks, economic risks remain that may continue the above-average stock market volatility we had forecast for 2022.

In December of last year, our article "Top Global Risks for 2022" cites the risks that may weigh on increasingly volatile stock markets for the coming year. Stocks around the world have fallen this year mostly due to two of these risks:

Concerns over a global economic recession have grown this year, due primarily to high inflation, further boosted by the war in Ukraine, and central bankers' efforts to tamp down inflation through tighter monetary policy. Economists' 2022 GDP forecasts have slumped in the first half of the year for most major countries with growth estimates cut by 1% or more, as you can see in the chart below. Canada is the exception, thanks to strong demand for its natural resources. In contrast to this weaker economic outlook, analysts have been raising earnings per share estimates. Most countries have seen earnings estimates climb meaningfully since the start of the year, as you can see in the chart below. 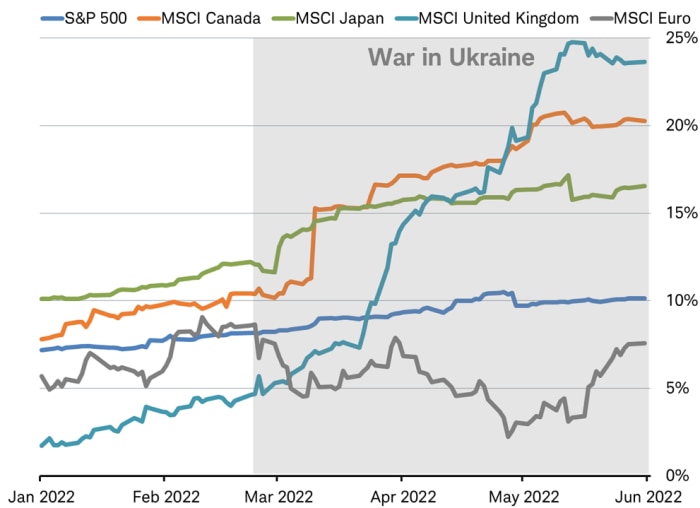 Indexes are unmanaged, do not incur management fees, costs and expenses and cannot be invested in directly. Past performance is no guarantee of future results.

Europe is the exception, with the earnings growth outlook appearing to have lagged the improvements seen elsewhere. But that is largely because we are measuring earnings growth in U.S. dollars; the euro has fallen versus the dollar by more than 6% this year. Measured in euros, European earnings are now expected to climb over 13% in 2022—up eight percentage points from the start of the year, even faster than in the U.S. and mirroring the climb seen elsewhere.

It is rare to see a divergence in the direction of the economic and earnings forecasts, so why now? It isn't that economists and analysts have different outlooks, it's that they have different tasks. For example, rising energy prices in the current environment may act as a drag on the economy but may boost earnings for the energy companies that make up the indexes. Also, the current rapid growth in business investment contributes more to corporate earnings than it does economic activity.

While investors have been focused on the slowdown in the economic outlook for much of the first half of the year, the direction of earnings may be more important to stock prices than GDP for the second half. If earnings remain solid, stocks may rebound. In fact, the price-to-earnings ratio (PE) for international stocks, represented by the MSCI EAFE Index, has rarely been lower than it is today outside of a recession (the history of analysts' estimates for the next 12 months of earnings begins in 1988, allowing us to look at nearly 35 years of the forward PE ratio), as you can see in the chart below. But should we begin to see the earnings outlook deteriorate, low valuations may not protect against further declines.

International stock valuations at average of past recession lows Shaded areas denote recessions in Europe or Japan. Price-to-earnings (PE) based on forward 12 months consensus estimates. Forecasts contained herein are for illustrative purposes only, may be based upon proprietary research and are developed through analysis of historical public data. Past performance is no guarantee of future results.

Investors may want to consider these investing ideas in the second half of 2022: 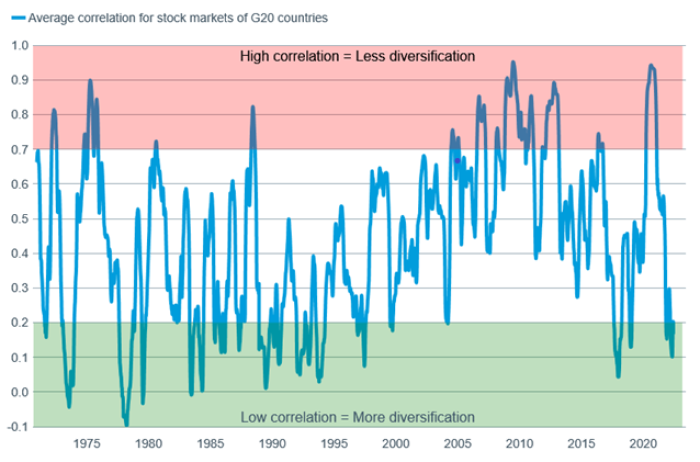 MSCI Indexes for 20 countries (G20 countries) used to calculate correlation. Past performance is no guarantee of future results. 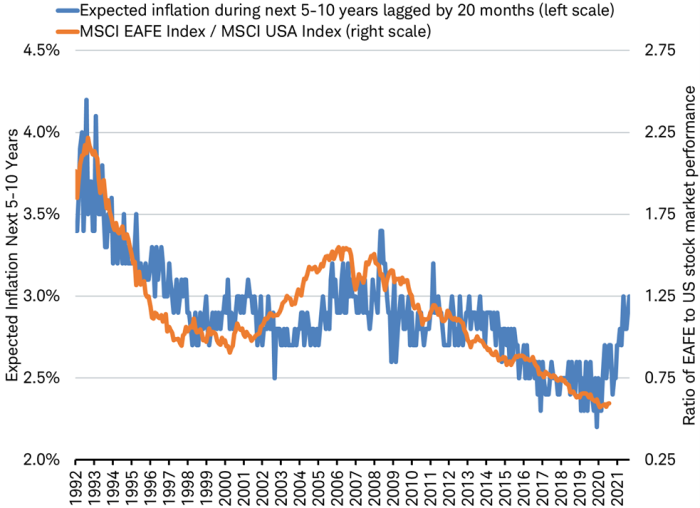 Forecasts contained herein are for illustrative purposes only, may be
based upon proprietary research and are developed through analysis of historical public data. Past performance is no guarantee of future results. 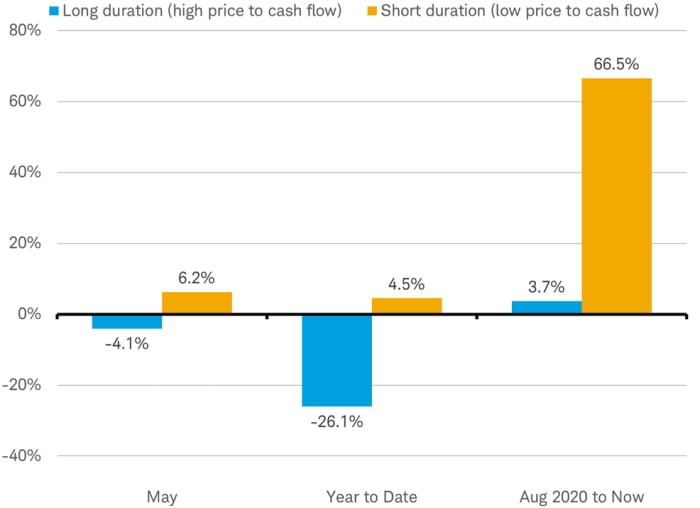 Past performance is no guarantee of future returns.

Economic uncertainty may have peaked in the first half of 2022, but it remains high. Having a well-balanced, diversified portfolio, with a risk profile consistent with your goals, and being prepared with a plan in the event of an unexpected outcome are keys to successful investing.

Divergences in the Energy Patch

Principles to navigate volatility – for advisors