The US Federal Reserve will soon slow its open market purchases of fixed-income securities. These purchases have served to keep rates low and liquidity flowing, but as the post-pandemic economy heals, it’s time for the Fed to taper. As they step back from buying, who is going to step forward?

One thing we know is that history won’t repeat itself. In 2013, then Fed Chairman Ben Bernanke alluded to the possibility of the Fed tapering bond purchases, and the market threw a taper tantrum. Rates on the 10-year Treasury jumped from 2% to 3%, only to fall back once the actual tapering began six months later.

We think it’s different this time. Rather than a tantrum, we believe there will be some give and take when the Fed steps back, more like a taper tango. That’s because, even as the Fed steps back from the bond market, US banks are likely to increase their bond investments.

Banks are in a challenging situation. Interest rates are low, loan growth is weak, and deposits are high. A crucial measure of available funding, US banks’ loan-to-deposit ratio is the lowest in 50 years (Display). 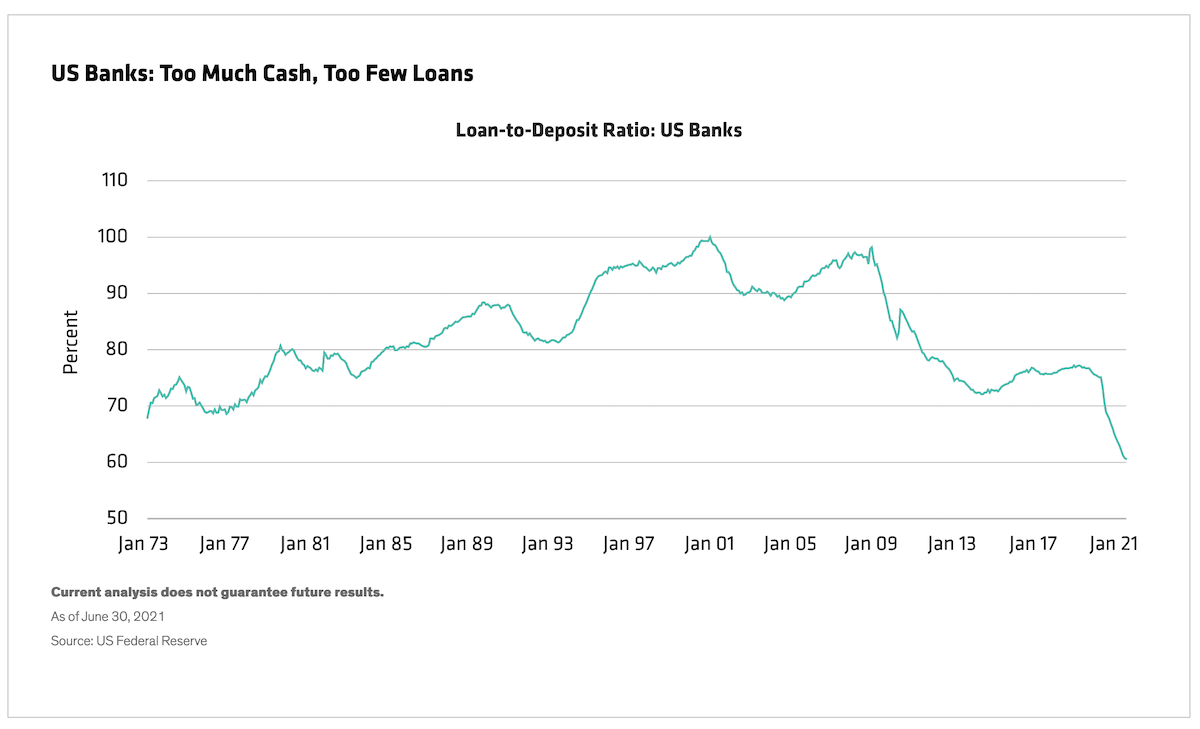 To offset the eroded net interest income, banks can invest their excess funding in securities. At the time of purchase, the bank denotes securities as either shorter-term positions or held to maturity (HTM). Those designated HTM remain on the balance sheet at the amortized acquisition cost until they mature, helping banks manage capital volatility and increase resiliency in stress tests.

The amount of HTM securities on bank balance sheets has more than doubled since the beginning of 2020, a sign that banks expect excess deposits to remain on their books for some time. Cash has also continued to build as banks wait to invest until rates rise (Display), either via the taper or through market forces. 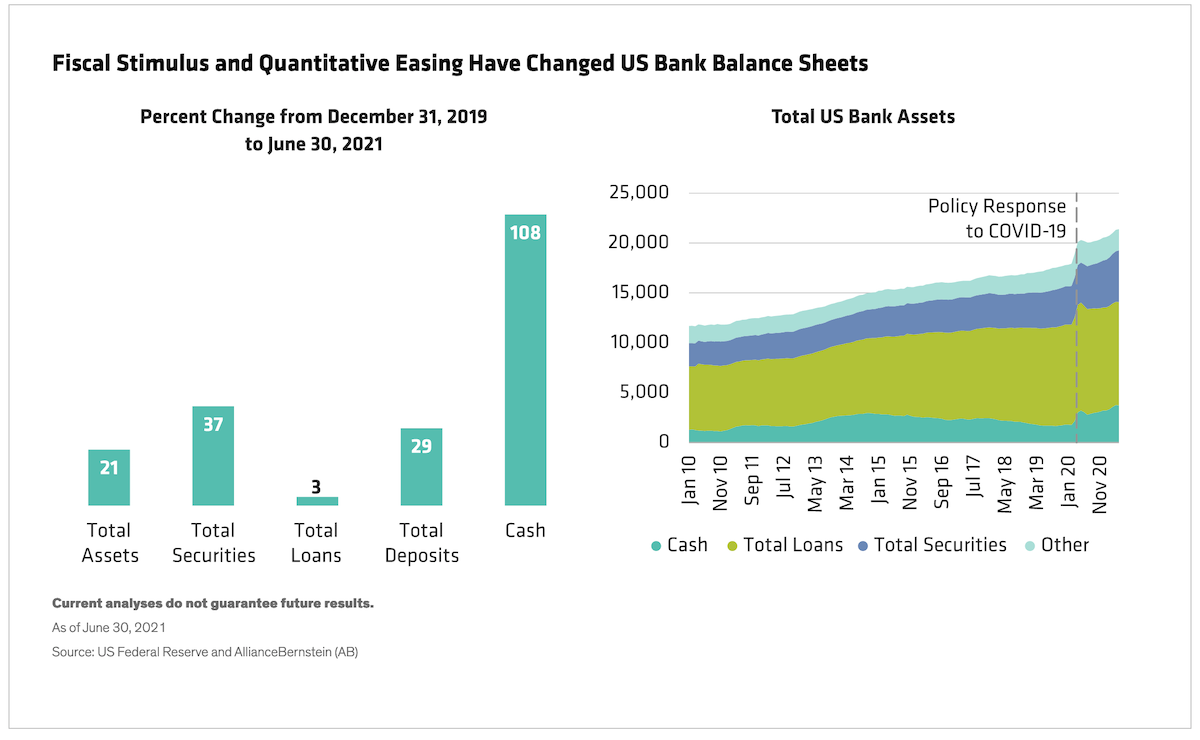 Part of the problem is that corporations haven’t made capital investments during the pandemic, limiting commercial and industrial loan demand. Banks say they’re optimistic about the post-pandemic economy as trends and economic activity appear robust compared to 2019. The only current concerns are lagging spending on travel and entertainment, though there are also some short-term supply-chain bottlenecks and inventory constraints to overcome. For these reasons, we believe the loan growth malaise is temporary.

In addition, much of the government stimulus sent to consumers has ended up in the bank. Consumers’ spending patterns have improved over the past 12 months, but they’ve also paid down loans and credit cards, further depressing loans outstanding.

Not only have loans decreased for the time being, but regulatory changes have increased the liquidity that banks need to have on hand and manage efficiently. Banks that might have loaned out over 90% of deposits in the past are aiming for a level closer to 75% today. But the industry isn’t even hitting this new, lower target. The industry’s loan-to-deposit ratio is currently at 60%, and one of the four largest banks is at a miserable 45%. That means there is a lot of capital on bank balance sheets just waiting to be invested.

In fact, we believe that excess funding is over $2.5 trillion. To fully deploy that much excess funding into loans could take more than four years, assuming loan growth returns to pre-pandemic levels of 3% to 4% annually. That’s at least four years or more that banks will be buying an elevated level of securities in the open market.

Some investors have expressed concern that the US’s current low loan-to-deposit ratio might be forewarning economic duldrums because it mirrors the move Japan’s ratio made in the 1990s (Display). 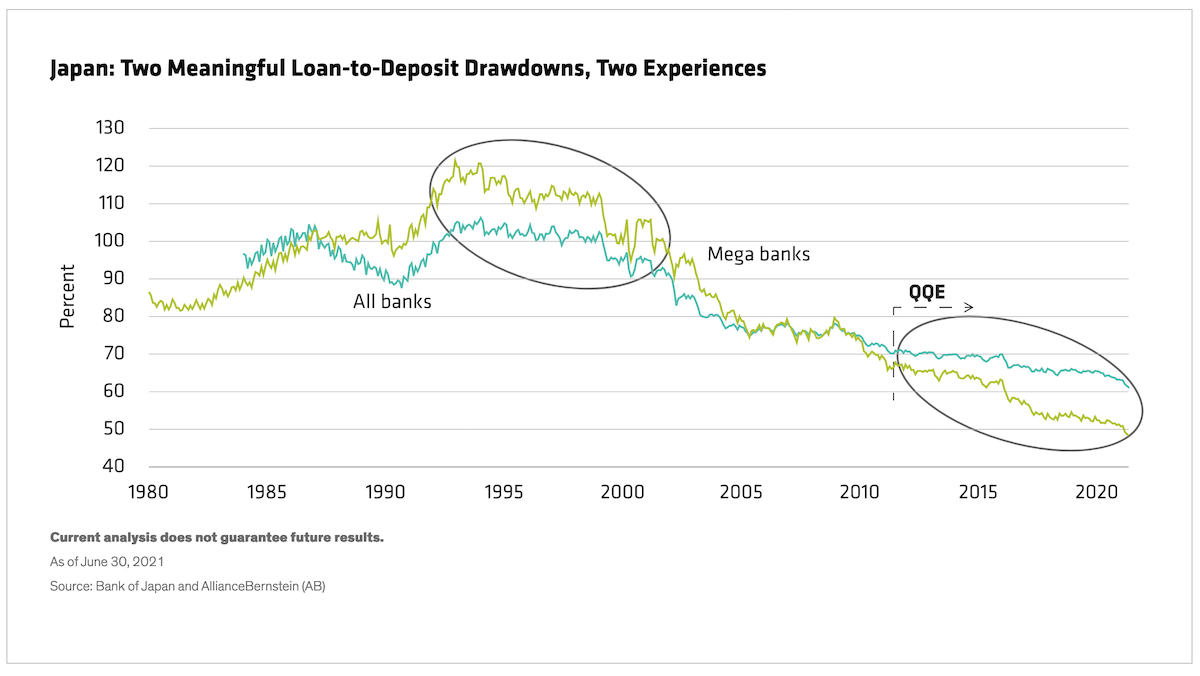 The 1990s became known as Japan’s Lost Decade when its economy stalled, something the US wants to avoid. However, at that time Japan had more significant issues than a falling loan-to-deposit ratio: it was also dealing with an aging population, low birth rate, stagnant growth and low efficiency, amid Japan’s post-bubble deleveraging cycle. None of those are critical concerns in the US today.

Japan’s loan-to-deposit ratio began to fall again in the mid 2010s—an experience we believe is more relevant to the US today. This time, the decline was due to qualitative and quantitative easing. Japan’s economy was recovering thanks to then Prime Minister Shinzo Abe’s economic plan, and credit growth was stable at 2% to 3%. With rates meager or even slightly negative, Japanese banks needed to offset low net interest margin. Constrained by regulation, they invested in the safest assets they could find: both domestic and global government and agency bonds.

As the Fed begins tapering, we believe US banks will fill the void—purchasing bonds to invest excess capital and supplement struggling net interest margins. And even though US banks can venture beyond government bonds, we expect their primary investment target to be high-quality Treasuries and agency bonds.

The decrease of the US bank loan-to-deposit ratio has been pronounced, but based on pandemic-induced fiscal spending rather than more harmful socio-economic circumstances. While the Fed tapers and bank loan growth normalizes over the next four or five years, albeit in fits and starts, we believe US banks investing excess capital will step into the open market in the Fed’s place.

Masahiko Loo is a Portfolio Manager at AB, focusing on the management of the Japan Multi-Sector Fixed Income portfolios, while working closely with the Global Fixed Income and Asia-Pacific portfolio-management teams. Prior to assuming his current role, he was an associate portfolio manager on the Japan Fixed Income team. Loo joined AB in 2012 in Fixed Income Business Development, promoting fixed-income products and serving in a client advisor role covering Japanese financial institutions. He started his career in fixed-income structured products pricing and then worked in liquidity products marketing at JPMorgan Securities Japan. Loo holds a BA in liberal arts from Waseda University. Location: Tokyo

Shrut Vakil is a Vice President and Corporate Credit Research Analyst, covering primarily North American and Latin American banks, and financial companies. Previously, he was an analyst in the firm's fixed-income risk oversight group. Vakil holds a BA in economics from Rutgers University and is a CFA charterholder. Location: New York

Are You Leaving Money on the Table?