Developed world equity indices were higher last week. Greatest influences remain ramping up of a fourth wave by COVID 19 (negative) and continued expansion of distribution of a COVID 19 vaccine (positive).

Unfavourable seasonal influences for equity indices from the beginning of August to the beginning of October (particularly in a Post-U.S. Presidential Election year) have yet to appear. North American equity indices including the S&P 500 Index, NASDAQ Composite Index and TSX Composite Index reached all-time highs on Friday thanks partially to encouraging comments by Federal Reserve Chairman Jerome Powell that implied continuation of an “easy money” monetary policy until at least late this year. The Dow Jones Industrial Average also is testing its all-time high at 35,631.19. Other key U.S. equity indices including the Dow Jones Transportation Average and the Russell 2000 Index moved higher last week, but are not close to their all-time highs. North American equity indices have a history of recording a mild correction of 3%-4% between now and the beginning of October followed by resumption of an intermediate uptrend to the end of the year. Note the link to a report by Larry Williams later in this report predicting an important low by U.S. equity indices in October. 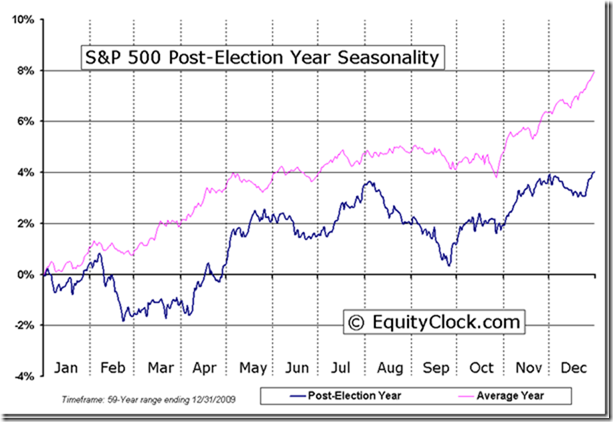 Long term technical indicator for U.S. equity markets (Percent of S&P 500 stocks trading above their 200 day moving average) moved higher last week. It changed from Overbought to Extremely Overbought on a move below 80.00. See Barometer chart at the end of this report.

Annualized Canadian Second Quarter GDP to be released at 8:30 AM EDT on Tuesday is expected to grow at a 6.7% rate versus growth at a 5.6% rate in the first quarter.

August Chicago Purchasing Managers Index to be released at 9:45 AM EDT on Tuesday is expected to drop to 69.8 from 73.4 in July.

August Non-farm Productivity to be released at 8:30 AM EDT on Thursday is expected to increase 2.4% versus a gain of 2.3% in July.

Canadian July Merchandise Trade Balance to be released at 8:30 AM EDT on Thursday is expected to be a deficit of $0.68 billion versus a surplus of $3.23 billion in June. 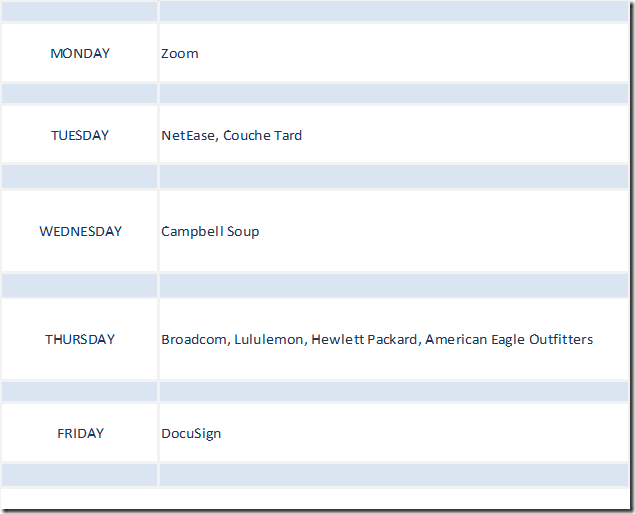 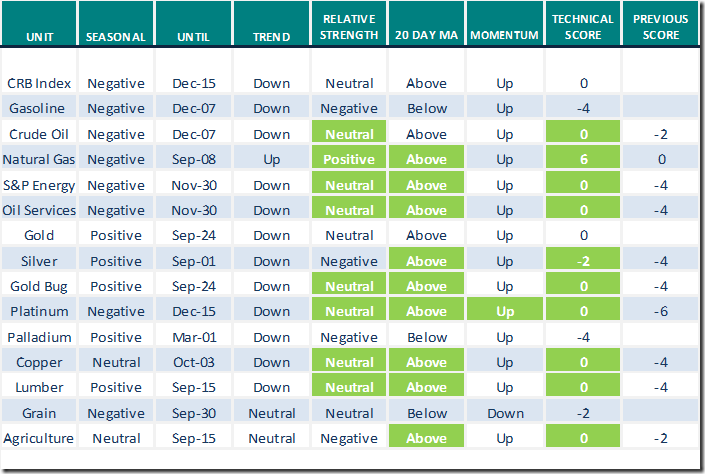 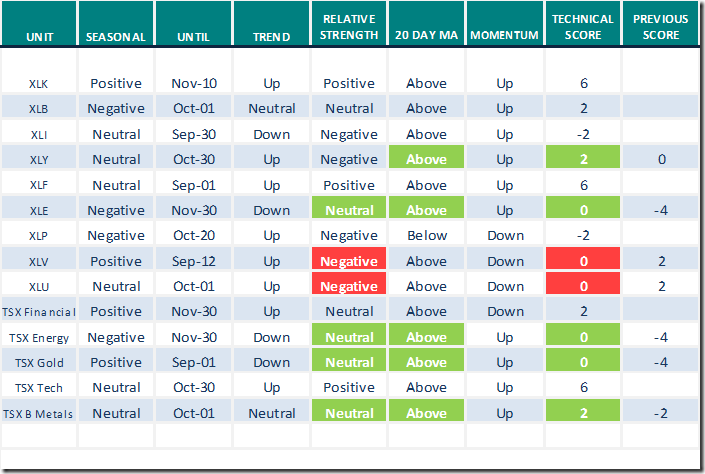 Lots of links this week

On the other hand, Mark Leibovit’s annual forecast for the Dow Jones Industrial Average suggests possibility of an intermediate peak this week followed by weakness to the end of the year. The forecast has been remarkably accurate so far this year. 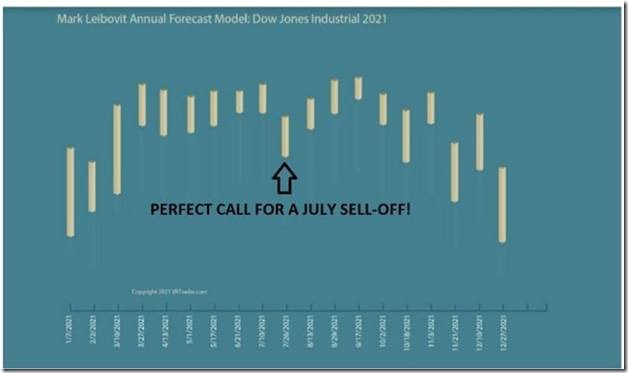 Links to comments from www.uncommonsenseinvestor.com

Thank you to Mark Bunting and Uncommon SENSE Investor for links to the following reports:

Thank you to David Chapman and www.EnrichedInvesting.com for a link to their weekly comment

Intermediate Uptrend based on at least 20 trading days: Score 2 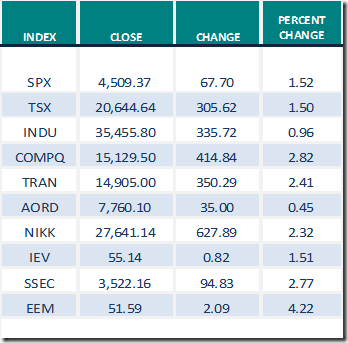 Seasonality Chart of the Day from www.EquityClock.com

Seasonal influences for gold and related investments are positive to September 20th. 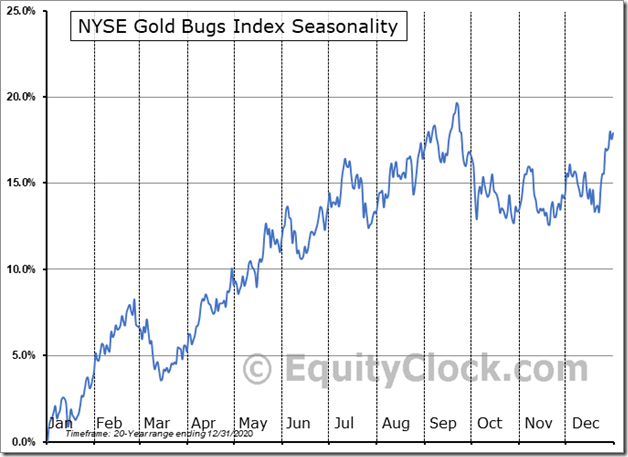 Better late than never! Gold, gold equities and related investments finally came alive on Friday following Jerome Powell’s comments. Traders are predicting that the U.S. Federal Reserve will allow inflationary pressures to rise faster and farther until at least late this year. GDXJ already has bounced 9.0% from its recent low and moved above its 20 day moving average on Friday. 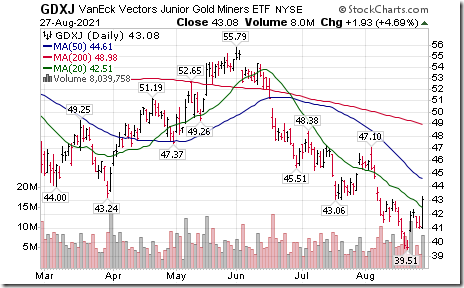 Technical Notes on Friday at

Strongest responses to Jerome Powell’s Jackson Hole Symposium speech are in the U.S. Dollar Index (weaker) and precious metal bullion/equity prices (stronger). Silver equity ETF $SIL is up over 4%. ‘Tis the season for strength in the precious metals equity sector until at least late September! 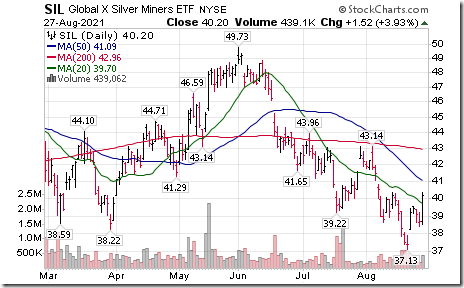 Semiconductor ETF $SMH moved above $271.79 to an all-time high extending an intermediate uptrend. 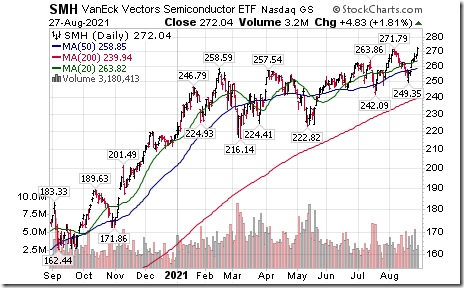 Editor’s Note: Seasonality currently is neutral until late September when it turns positive. If a subscriber to www.equityclock.com , click on seasonality charts at:

Broadcom $AVGO a NASDAQ 100 stock moved above $494.60 to an all-time high extending an intermediate uptrend. 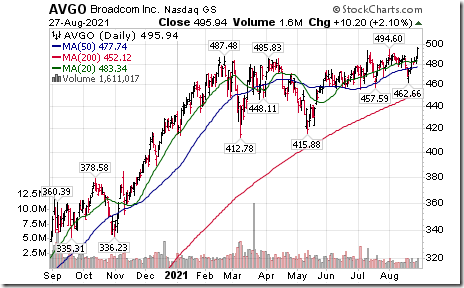 Editor’s Note: Seasonal influences are favourable starting in mid-August. If a subscriber to www.EquityClock.com, click on seasonality charts at https://charts.equityclock.com/broadcom-corporation-nasdaqbrcm-seasonal-chart 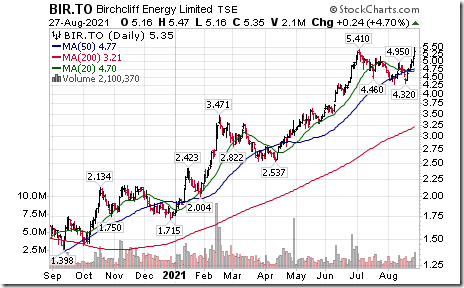 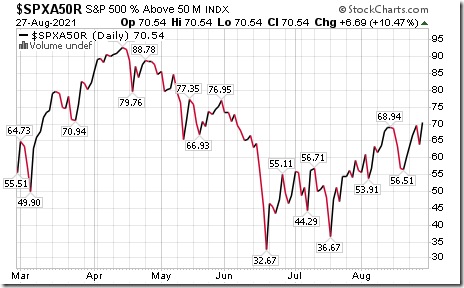 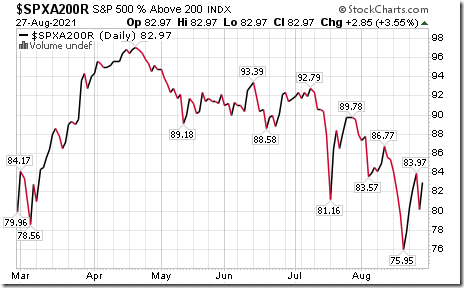 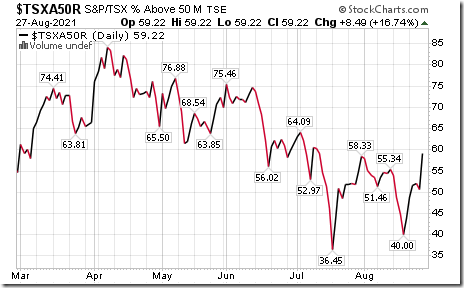 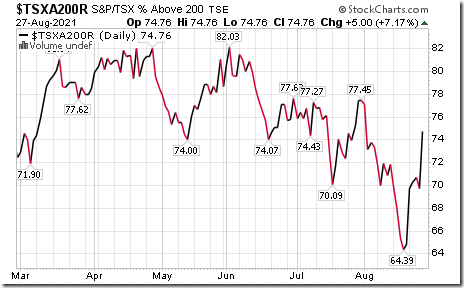 Disclaimer: Seasonality and technical ratings offered in this report and at

www.equityclock.com are for information only. They should not be considered as advice to purchase or to sell mentioned securities. Data offered in this report is believed to be accurate, but is not guaranteed

This post was originally publised at Vialoux's Tech Talk.

Author
Don Vialoux, EquityClock.com
Don Vialoux is the author of free daily reports on equity markets, sectors, commodities and Exchange Traded Funds. All of the views expressed herein are his personal views although they may be reflected in positions or transactions in the various client portfolios. Daily reports are available at http://www.timingthemarket.ca.

Democrats Concede That the House May Be Lost; Senate Now in Play