by Christopher Hogbin,Head of Equities at AllianceBernstein

Passive equity portfolios continue to gain popularity, but some investors might not know that a small group of outperforming stocks have driven most of the gains in recent years. Concentration risk could become a big burden if the favorable environment for these companies sours.

Since 2010, investors have flocked to exchange traded funds (ETFs) and index mutual funds, seeking market returns at a cheaper price than actively managed portfolios and without the underperformance risk. And active management results have generally disappointed investors over the last decade.

But passive strategies’ performance has been driven by a hidden threat: concentration risk. While the investment landscape has been conducive to delivering outsized returns for a select few stocks, what could happen if the favorable environment these companies enjoy sours? This question is becoming especially pertinent as worldwide inflows to equity funds have surged to $576 billion in the past five months through early April—exceeding combined inflows of $452 billion over the previous 12 years, according to Bank of America.

Concentration risk increases when exposure to a single stock, sector or style becomes too large relative to the other parts of a portfolio or index. Sometimes it happens on purpose—when managers take a big, high-conviction position in the portfolio. But other times, it occurs when oversight fails, or the investment process lacks the proper mechanism to rebalance. In those instances, the favored positions swell relative to other portfolio holdings, becoming an increasingly dominant part of the whole. This is the case for many portfolios today, especially passively managed ones.

The US stock market has delivered strong returns in recent years. But as concentration has risen, that robust performance has mostly been fueled by narrow leadership among a handful of companies. Over the last several years, the five largest US stocks have become an increasingly sizable proportion of the overall market—doubling from 11% in 2017 to 22% in 2020 (Display).

In growth benchmarks, which have larger weights in mega-cap giants, concentration is even more acute. The five biggest stocks in the Russell 1000 Growth Index accounted for 36% of the benchmark at the end of March. Further compounding matters, not only are these companies taking a bigger share of the market, but their performance has also become highly correlated. In other words, these five stocks tend to move up together, and more worryingly, go down together.

As a result of the growing market concentration, passive funds have a disproportionate exposure to these stocks—which makes for a top-heavy portfolio. Investing disproportionately in stocks that continue to deliver outsized returns isn’t necessarily bad. But the performance of a non-diversified portfolio may surprise investors if the tide turns.

While no one can predict when the market will shift for the long term, in late 2020 through the first quarter of 2021, the dominance of the five largest US stocks in S&P 500 returns receded significantly (Display). At the same time, there have been signs of improvement for active managers. In the first three months of 2021, the percentage of actively managed US equity portfolios outperforming benchmarks exceeded 2020 averages in six of nine Morningstar style categories. 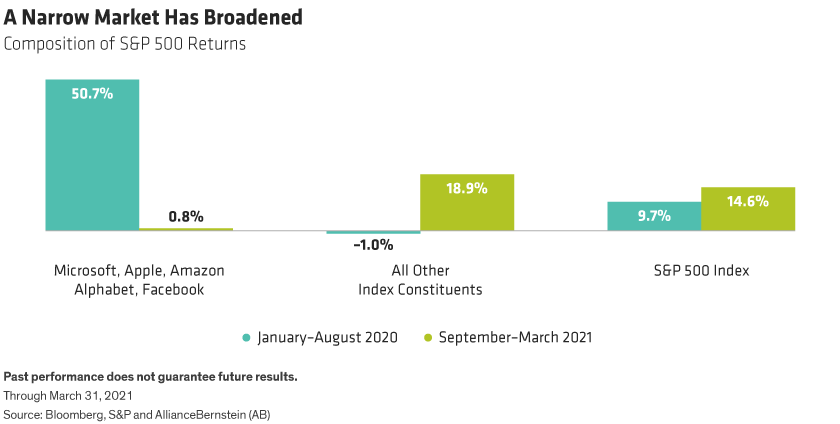 How precarious is the situation? To answer, we must examine the common factors underpinning the collective success (and correlation) of today’s leaders—namely, falling rates and the benefits of platform business models with network effects and “winner takes all” competitive dynamics. These distinctive business models have fostered a virtuous cycle of growing scale and an appreciating currency for M&A. Some signals may point to an inflection point on the horizon that could spell trouble for highly concentrated passive portfolios.

The Fed has kept interest rates near zero through the pandemic to backstop the economy and foster its recovery. But as economic activity rebounds, longer-term rates are expected to rise. Rates have already begun to ascend; the yield on the 10-year US Treasury has risen 72 basis points since the beginning of this year through the end of April. Recently successful stocks may be most vulnerable to this move.

Low rates are generally good for all stocks but especially for high-growth stocks. That’s because a stock’s value is determined by the present value of its future cash flows. And since companies with rapid earnings growth depend on the cash flow they generate further into the future, a decline in the discount rate benefits growth stocks disproportionately. However, the converse also holds true. In other words, as interest rates rise, the present value of those cash flows diminishes.

Crowded tech giants aren’t the only names vulnerable to rising rates. Unwitting exposure to interest-rate sensitivity may lurk elsewhere in a portfolio. A review of the S&P 500 reveals that the index consists of a historically high proportion of companies whose stocks rise as rates fall and fall as rates rise (Display). Any rate increases could cause low-rate-dependent stocks to fall unexpectedly. Portfolios with a high concentration in these names, like passive index strategies, could be in for a rude awakening.

Rising rates aren’t the only wrinkle. Mega-cap tech companies rode the wave of the enterprise effect that propelled their stocks higher, but now they risk becoming victims of their own success. Their size makes them a target for increased regulatory scrutiny, as lawmakers fear monopolistic powers will stifle competition and hand control to a select few. Last October, for example, the US Congress released a report on big tech monopolies that called for strengthened antitrust laws and the adoption of new regulations to reduce dominant companies’ power. The report focused on the same companies that have propelled the market higher. But would regulation be value-destroying? It depends.

Just as exposure to rising rates differs among companies, regulation will not hit every big tech firm to the same degree. For example, companies that depend on acquisitions to grow could be significantly distressed by regulatory stringency. Organic growth will likely be insufficient to maintain these behemoths’ historical growth trajectory. A loss of M&A would not only reduce their growth potential but would also limit their ability to deploy capital and boost returns. Active managers can weigh this risk and position their portfolios to reduce exposure, but passive strategies will just be along for the ride, potentially being whipsawed along the way.

Actively Adapting to the Environment

A shift in rates or regulation doesn’t flash a clear signal of a long-term market turn. And even if the market shifts, every company’s sensitivity to such a change is different.

Passive funds can’t adjust positions to reflect these risks. But active managers can exploit the subtleties among companies by overweighting, underweighting, or simply not owning index constituents. If the dominant companies of recent years face new threats and the sources of market returns broaden, selective high-conviction portfolios could make the difference in delivering successful outcomes for investors.

Chris Hogbin is Head of Equities at AllianceBernstein (AB)

Shri Singhvi is Co-Head of Strategic Equities at AB

The views expressed herein do not constitute research, investment advice, or trade recommendations and do not necessarily represent the views of all AB portfolio-management teams and are subject to revision over time.

The Most Profitable Company in the Whole World