Variety is the spice of life, and that's especially true during these COVID times. With that in mind, let's analyze how investment returns can vary over time. The markets and economy seem to be on the edge of a major long-term shift. By looking at the history of markets we can get clues about what could happen in the future.

There are 2 periods from the 20th century that I find to be particularly relevant right now: the era of financial repression from 1942 to 1955, and the era of bottoming/rising inflation (leading to a rising stock/bond correlation) from the early 1960s to the 1980s.

The $64,000 question is this: If the current financial repression era has further to go and ends up producing structural inflation, will the rotation from growth to value and from large to small end up being secular rather than cyclical, or, in other words, a very long-term trend rather than a shorter-term rotation?

The financial repression era started in 1942 with the buildup to World War II and ended when the Fed was granted its independence in 1951. The inflation era started when inflation and bond yields ended their "low-for-long" period in the early 1960s and started rising, slowly at first, and then all of a sudden.

As inflation and rates rose, and the secular bull market for stocks matured and eventually peaked (with a speculative frenzy in 1968), the stock/bond correlation went from steeply negative in 1960 to flat in 1964 to positive during the 1970s and 1980s.

Both the 1940s and the late 1960s and 1970s produced inflation, and it's pretty clear from the chart below, Investment returns over time, that value stocks and especially small-cap value were outstanding inflation hedges during those periods.

Left behind were large-cap growth stocks. That couldn't be more different from the leadership of the past 12 years, although value and small caps have been quickly catching up to large-cap growth since last fall.

In the chart, the cluster on the left seems counter-intuitive at first, knowing that inflation spiked several times during the 1940s. But with the Fed monetizing the war debt and capping short rates at 3/8% (or 0.375%) and long yields at 2.5%, there was no return and no volatility to be had in the bond market.

Gold was fixed at around $35 during that period, so there was no return or volatility to be had there either. But even the Commodity Research Bureau (CRB) Index Total Return did very poorly during that time, which, to me, seems a bit surprising. Stocks were the only game in town, nominal or real.

Moving to the upper right side of the chart, here we see the post-GFC (global financial crisis) era of monetary inflation. Commodities have performed poorly, and basically nothing has been able to keep up with equities (much like the 1940s but unlike the 1970s).

You might notice that dotted pink line going straight up past the S&P 500. What I did here is index bitcoin to the price of gold as of March 2020, which is when bitcoin's latest rise began after the Fed's printing presses turned back on. This shows what might have happened to the price of gold, had it been the only game in town as a monetary inflation hedge.

The analogs in this chart show that during previous regimes of financial repression and rising inflation, value beat growth, small beat large, stocks beat both bonds and commodities, but commodities were better than bonds. Something to keep in mind, in case the current era of monetary inflation lasts a while longer.

Below I show the same relationships as above but in a more traditional way. These charts simply show the intersection of risk (volatility) and return (nominal compound annual growth rate or CAGR). The first chart shows the history since 1950 (through February 2021). 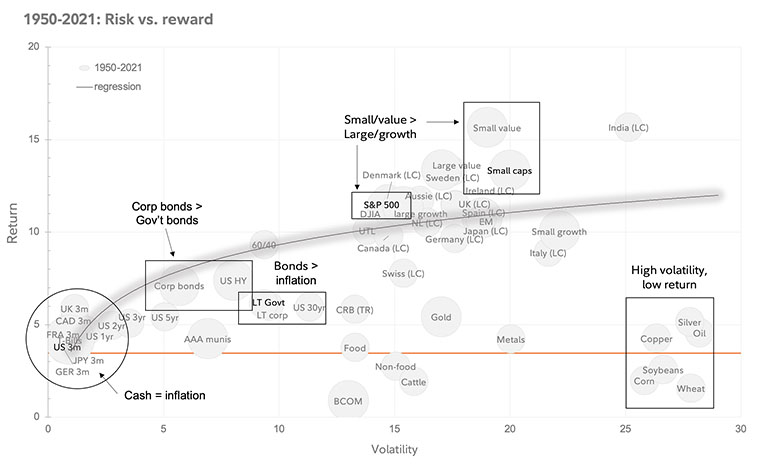 Past performance is no guarantee of future results. Monthly data as of 03/28/2021. Source: FMRCo, GFD, Bloomberg, Haver.

With that last point in mind, let's take a look at a few relevant analogs. First up is the post-GFC era since 2009 (which in my view has been a secular bull market).

Here we saw bond volatility rise, although bonds did keep up with inflation (mostly because this time series goes to 1985, which is 5 years into the disinflation era). The inflation rate was 5.64%. Again, value and small caps crushed large caps and growth. With gold becoming free to move starting in 1971, it performed well above the inflation rate during this time (9.98% vs. 5.64%).

The Fed and the future

The chart shows that the 1940s produced vastly higher returns for small caps and value. It also shows that the real return on cash was 4 percentage points below normal, and again highlights how repressed bonds were back then, with a cash-like return for a cash-like volatility.

Could this be part of the Fed's playbook in the coming years? 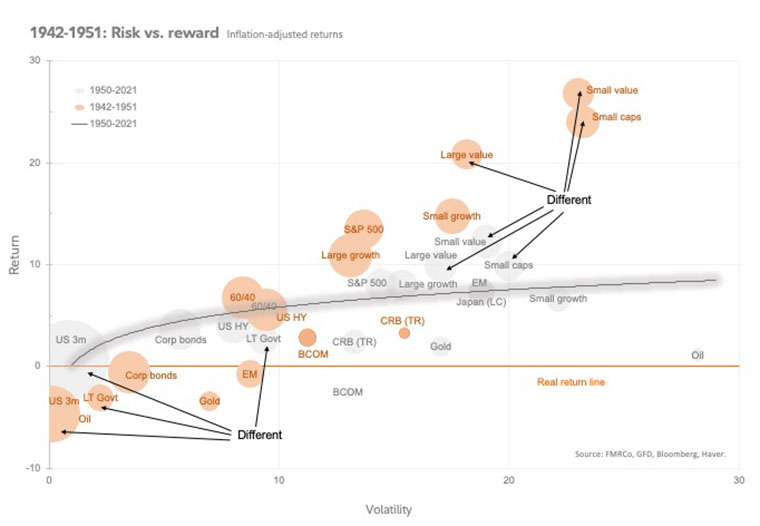 Past performance is no guarantee of future results. Monthly data as of 03/28/2021. Source: FMRCo, GFD, Bloomberg, Haver. 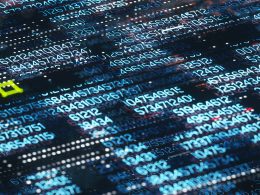