The power of carry

EM external debt funds have received steady inflows over the past ten quarters. However, EM’s local bond markets are still de facto ‘flow virgins’ in a QE world, that is, these markets have yet to be penetrated by serious foreign money.

This report quantifies the power of carry in EM local markets, given the low yields in developed countries. Regardless of the chosen metric for returns – real, nominal, Dollar-denominated or in local currency terms – yield alone should enable EM’s local currency government bond markets to outperform developed government bonds markets of similar duration massively over the next few years. Add potential currency upside after years of Dollar appreciation and the profile of EM local bonds looks even more compelling.

Quantitative Easing (QE) policies in developed countries triggered a flight from yield in EM as investors pursued capital gains in developed markets instead. As the capital gains in developed markets fade and with yield nowhere to be found, a search for yield in EM has finally begun. EM external debt funds have received steady inflows over the past ten quarters. However, EM’s local bond markets are still de facto ‘flow virgins’ in a QE world, that is, these markets have yet to be penetrated by serious foreign money. This report quantifies the power of carry in EM local markets, given the low yields in developed countries. Regardless of the chosen metric for returns – real, nominal, Dollar-denominated or in local currency terms – yield alone should enable EM’s local currency government bond markets to outperform developed government bonds markets of similar duration massively over the next few years. Add potential currency upside after years of Dollar appreciation and the profile of EM local bonds looks even more compelling.

The mountain of negative yielding bonds

Some USD 13.9 trillion of developed market bonds now trade with negative nominal yield (Figure 1). Owners of bonds with negative yield pay to lend money and only profit if yields continue to fall. This requires either continuing central bank sponsorship at a time, when the limits on monetary policy are becoming more evident, or continuing economic weakness, which ultimately undermines credit worthiness. 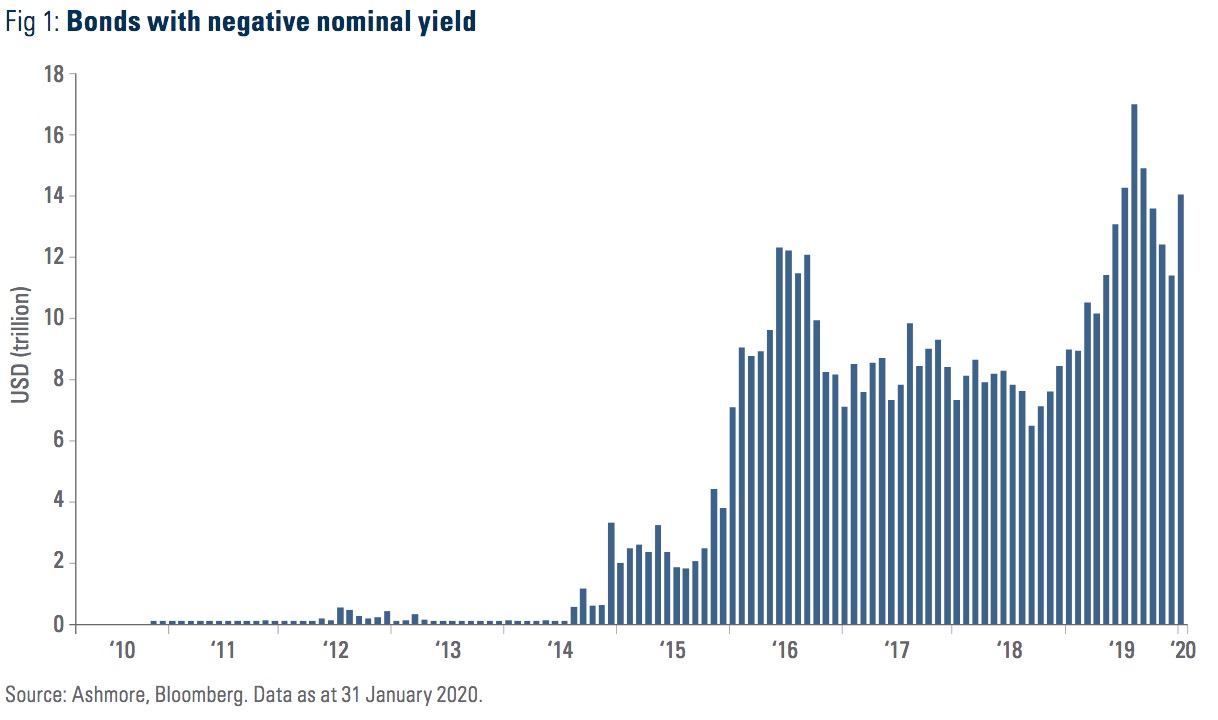 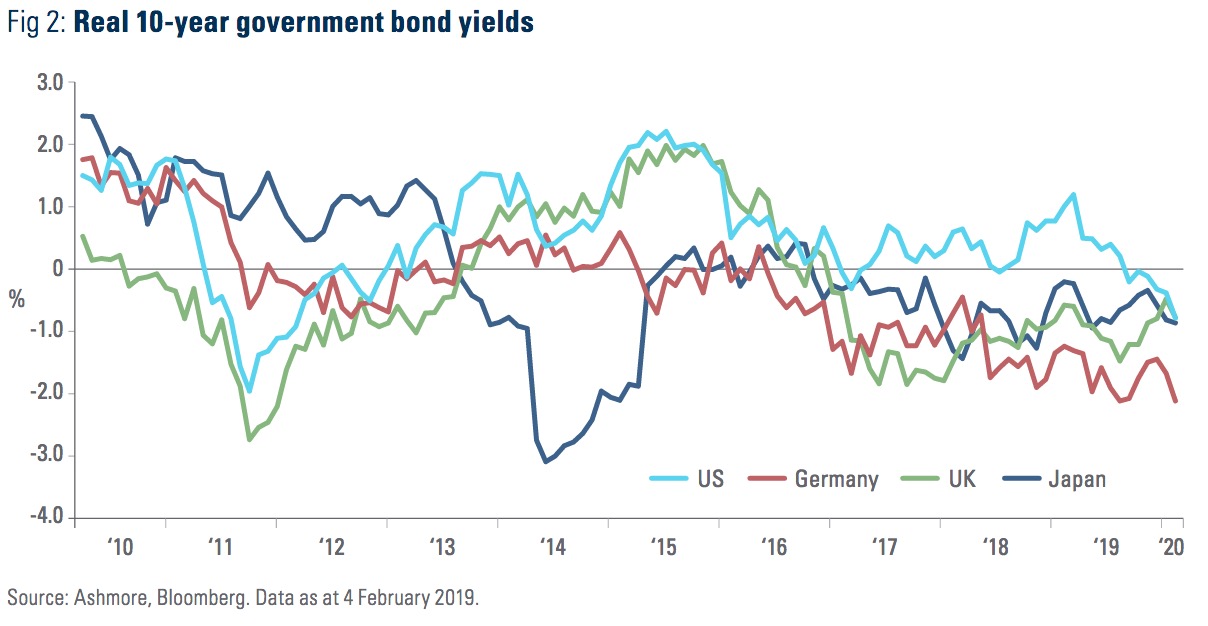 Real yields have been driven to their current low levels as a result of deliberate policies. After the Developed Market Crisis in 2008/2009, central banks took that view that nominal asset price appreciation induced by massive purchases of government bonds could induce recoveries in the real economy. However, the policy of pushing up asset prices by subsidising interest rates has had at least two important un-intended consequences.

The first problem is that asset prices have become extremely mispriced. The exclusive focus on asset prices did not address the underlying productivity and debt-related challenges facing developed economies, so growth rates have generally been disappointing and central banks have never fully been able to step back from markets. Indeed, the combination of continuous monetary stimulus and relatively weak fundamentals pushed valuations in bond markets in developed countries to extremes, where the prospects of further capital gains are poor, while yields are practically non-existent. Granted, yields may fall further, especially if recession sets in, but then debt sustainability could emerge as a major problem as investors are likely to baulk at buying more and more government bonds at negative yields. In turn, this increases the risk of financial repression. In short, chasing yield in developed economies looks more and more like a dangerous Ponzi scheme.

From flight from yield…

The other unintended consequence of the policies to inflate asset prices in developed economies was to distort global bond markets seriously. During the period of maximum QE-induced yield compression in developed bond markets, investors engaged in a wholesale flight from yield in EM in search of capital gains in developed markets. Between 2011 and 2017, approximately one third of foreign money invested in EM bond markets left the asset class. Even today, we estimate that US public pension funds only allocate about 1.5% to EM bonds compared to 6.0% prior to the Taper Tantrum. The flight from EM bond markets soon induced a slowdown in growth due to binding finance constraints, thus extinguishing, for a time, the world’s most important engine of economic growth.

…to search for yield

About two and half year ago, investors began to return to EM fixed income markets, motivated by the high yield and prospect for capital gains. Inflows have so far mainly targeted EM’s Dollar-denominated bonds, including sovereign and corporate debt, short duration as well as some blended debt (which includes some local bonds but is mainly Dollar-denominated). Due to very light positioning post the Taper Tantrum, yields and spreads in EM’s Dollar-denominated bond markets have generally been attractive in both absolute and relative terms. Indeed, today EM external debt, which is an extremely diverse asset class of 73 index countries and 54% investment grade, trades at a spread in excess of 300bps over US Treasuries compared to just 180bps over Treasuries in 2007, when the asset class counted just over 30 countries in the index and the average rating was well below investment grade.

Investors have only just begun to re-engage with EM local currency bonds, which is, in effect, the last remaining ‘virgin’ bond market in a fixed income world otherwise heavily penetrated by QE- induced flows. Local has been off limits due to the strong Dollar. The lack of foreign inflows is the main reason real yields have been stable in EM local government bond markets, indeed, range bound since 2011 with an average of 262bps with a standard deviation of 50bps over this period (Figure 3). Real yields are currently 201bps following a seasonal pick up EM consumer prices (CPI) inflation in late 2019. 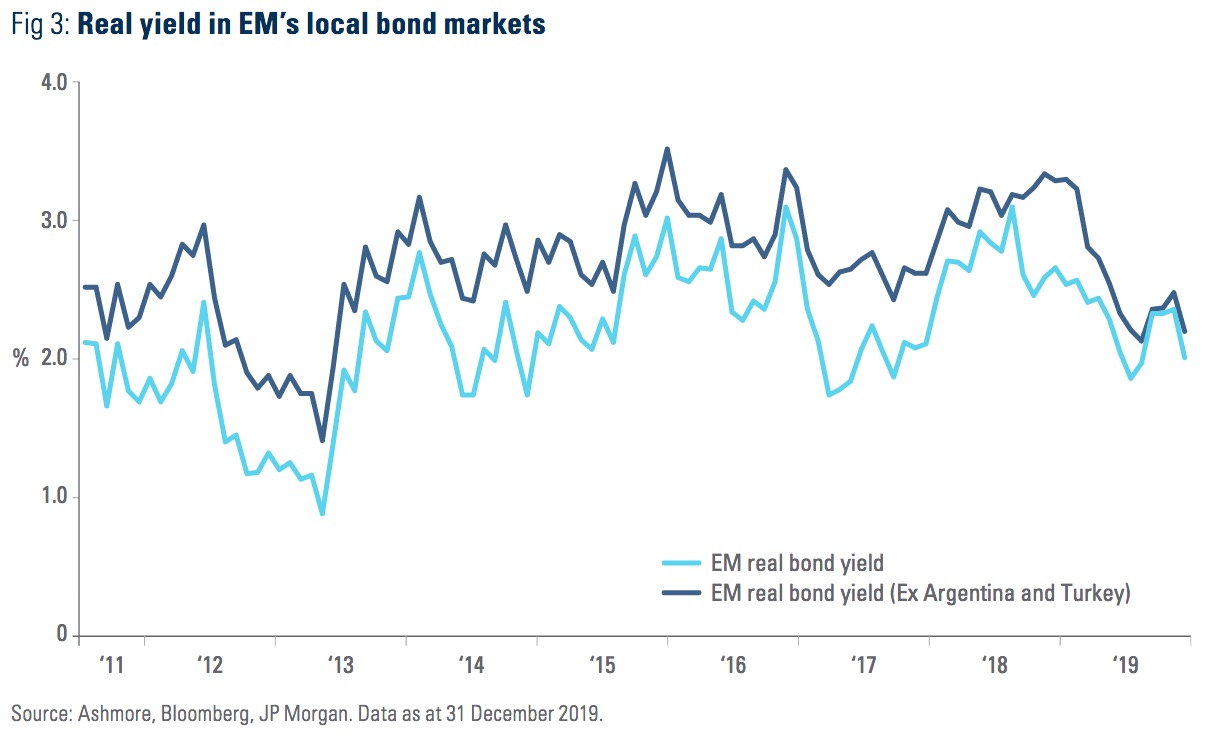 The power of carry

EM local bond markets have yet to attract meaningful inflows

The awesome power of carry in EM local markets in the context of very low yields in the rest of the world is richly illustrated in Figure 4. The top panel of Figure 4 provided a snapshot of yields, CPI inflation rates and real yields for 5-year government bonds in EM local markets (GBI) as well as US, German, UK and Japanese markets. EM nominal bond yields are currently about three times higher than the second most ‘yieldy’ bond market (the US) and nine times ‘yieldier’ than the UK gilt market. Nominal bond yields are outright negative in Germany and Japan. Real yields are negative in the developed bond markets shown below in sharp contrast with the positive real yield in EM markets. 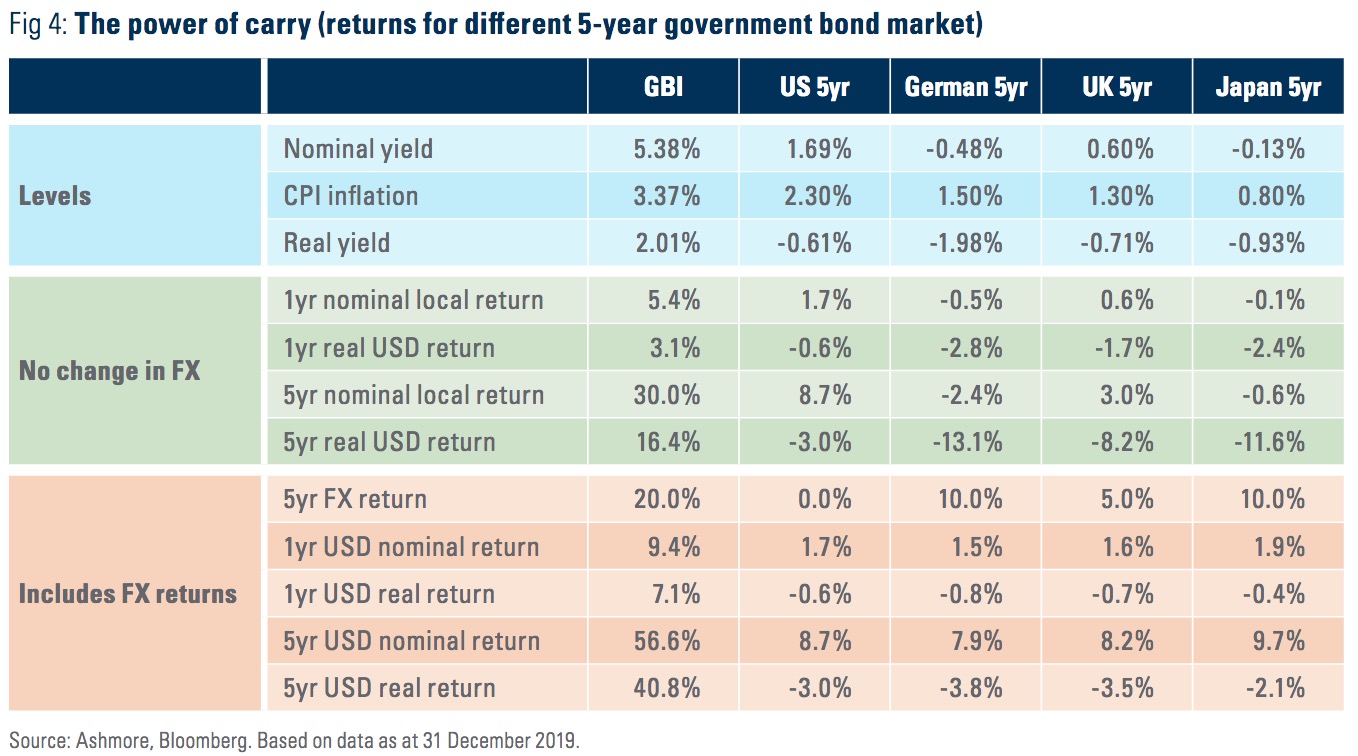 The middle panel in Figure 4 illustrates the real returns from a Dollar investor’s perspective, i.e. how much money the investor actually takes home after the investment period, after accounting for the loss in purchasing power arising from US inflation over the period in question. We assumed US inflation remained stable at 2.3%. In practice, a Dollar invested at the start of the period, gets the yield while in the local market and then converts the proceeds back to Dollars at the end of the investment period before subtracting US inflation over the period in order the derive the real return in Dollar terms. Notice that local inflation does not matter in this calculation; only the exchange rate at the start and end of the investment period. The contrast in returns between EM local bonds and developed market bonds is truly stark even in a scenario of unchanged exchange rates. EM bonds return 3.1% in real Dollar terms after a year and a compounded return of 16.4% in real Dollar terms over five years, while all the developed bond markets deliver outright losses in real Dollar terms, which range from 3% to 13%.

The bottom panel in Figure 4 extends the analysis to include our expected FX returns over the 1-year and 5-year investment periods. After ten years of Dollar strength, we expect the Dollar to lose about 20% versus EM currencies and 10% versus EUR and JPY over the next five years. The Dollar is also likely to lose some ground versus GBP, although not as much due to the severe economic burden of Brexit (5%). For illustration, taking into account these currency moves, EM local bonds should deliver a return in real Dollar terms of 41% over five years compared to outright losses in US, German, UK and Japanese bond markets.

The flight from yield in EM in search of capital gains in developed markets was painful for a time, but now forms the basis for good future return prospects. EM bonds have already outperformed developed market bonds significantly in the past four years. This is likely to continue, because future return prospects are poor in developed economies, while EM bonds are both cheap and under-owned. After some years with inflows into EM Dollar-denominated bonds, the search for yield in EM local markets is about to begin.

The results presented in this report illustrate the awesome power of carry in EM local markets in a world of very low yielding developed market bonds. While many investors feel uneasy about allocating to local bonds due to FX risk, they should bear in mind that the Dollar is very expensive and likely to fall significantly in the coming years as the long US business cycle expansion peters out. Given the enormous exposure of foreign investors in the US markets – USD 10trn by our reckoning1 – there is merit in beginning to diversify away from the US sooner rather than later.

1 See: ‘What goes around comes around: a short note on Dollar risk’, Market Commentary, 17 January 2020.

No part of this article may be reproduced in any form, or referred to in any other publication, without the written permission of Ashmore Investment Management Limited © 2020.

Important information: This document is issued by Ashmore Investment Management Limited (‘Ashmore’) which is authorised and regulated by the UK Financial Conduct Authority and which is also, registered under the U.S. Investment Advisors Act. The information and any opinions contained in this document have been compiled in good faith, but no representation or warranty, express or implied, is made as to their accuracy, completeness or correctness. Save to the extent (if any) that exclusion of liability is prohibited by any applicable law or regulation, Ashmore and its respective officers, employees, representatives and agents expressly advise that they shall not be liable in any respect whatsoever for any loss or damage, whether direct, indirect, consequential or otherwise however arising (whether in negligence or otherwise) out of or in connection with the contents of or any omissions from this document. This document does not constitute an offer to sell, purchase, subscribe for or otherwise invest in units or shares of any Fund referred to in this document. The value of any investment in any such Fund may fall as well as rise and investors may not get back the amount originally invested. Past performance is not a reliable indicator of future results. All prospective investors must obtain a copy of the final Scheme Particulars or (if applicable) other offering document relating to the relevant Fund prior to making any decision to invest in any such Fund. This document does not constitute and may not be relied upon as constituting any form of investment advice and prospective investors are advised to ensure that they obtain appropriate independent professional advice before making any investment in any such Fund. Funds are distributed in the United States by Ashmore Investment Management (US) Corporation, a registered broker-dealer and member of FINRA and SIPC.