Checking inflation for a pulse

As humans, we tend to believe that what has happened recently will continue into the future. In the finance world, we often describe this tendency as ‘recency bias’ – a common mental shortcut. (Other less technical sayings include ‘the trend is your friend’ or ‘a ball in motion stays in motion’!) Regardless of the term, there’s a compelling reason behind this tendency—often, the specific situation upon which we’ve made assumptions is actually borne out. But sometimes this behavioural bias can go a little too far. A case in point is inflation. We question whether the market’s general view in recent times that inflation is dead has gone too far.

No matter how you measure it, whether through the Consumer Price Index (CPI) or the U.S. Federal Reserve’s (Fed’s) preferred method – via the core personal consumption expenditure (PCE) deflator index – inflation has been stubbornly low and, for the majority of the past decade, has hovered below the targeted 2% level. So why is inflation so low, especially with full employment? Demographics are one factor as is technology, with multiple facets. In addition to the rising cost of smartphones, it seems technology costs for the average household are stable or falling. You can get a 65” LED television, for instance, for under $1,000, but it’s not just consumer electronics. Busines technology advancements increase productivity and reduce the unit costs of production. And lets not forget the rise of global trade over the past 20 years – another factor contributing to the suppression of inflation.

While we don’t believe inflation will rise materially anytime soon, mainly thanks to demographics, it appears that market expectations have become too benign. Below, we’ll explore several potential drivers that could lift inflation. It’s our base case that inflation is not dead, it has just been asleep, which means that higher inflation is one of the larger risks that no one is paying attention to. Inflation might be lower for longer, but not lower forever. 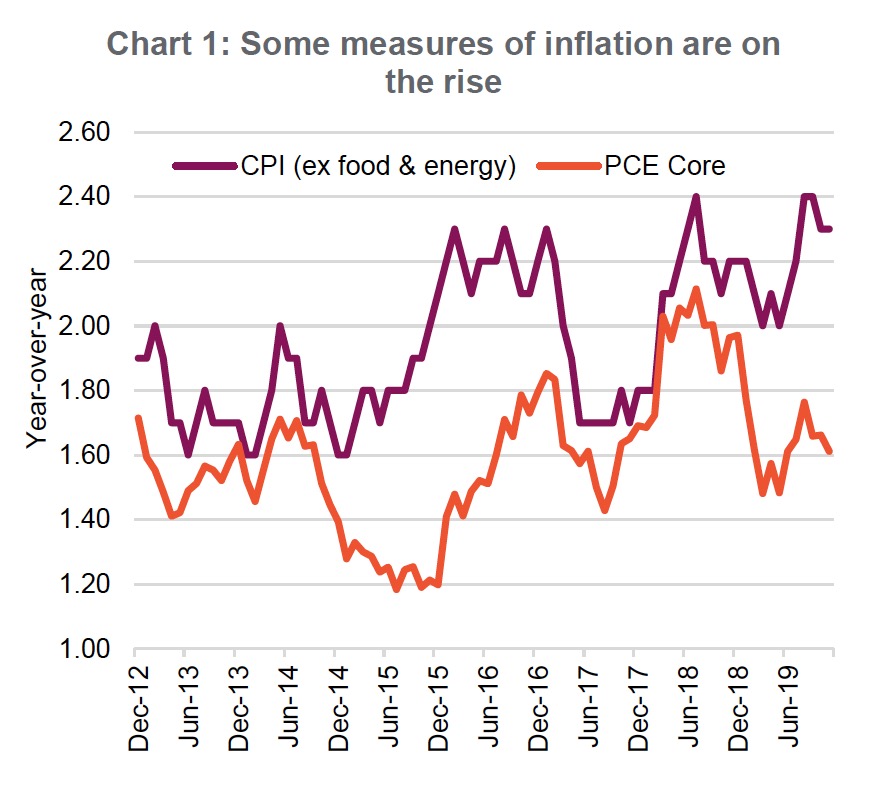 With U.S. CPI inflation data to be released on January 14, markets might well again begin to focus on the upcoming data. Core CPI is already above 2% and is expected to increase by 0.9%, pushing the annual pace of inflation to 2.3%. (Chart 1)

We are in a period of free rein for inflation with numerous Fed members signalling they should be on hold even if inflation begins to run hot, in a sort of “make up strategy”. Federal Reserve Bank of St. Louis President James Bullard noted that he would welcome a rise in inflation above the bank’s 2% target. It would have to persist for a long period before it would cause any policy shifts. In effect, inflation is getting a hall pass.

Globally we’re already starting to see inflation firming. In Canada, inflation is also running close to or above central bank targets. Countries in Europe such as Poland, Switzerland, Germany, France and Sweden are grappling with higher prices as well. The Chinese story may be straightforward, but dramatic nonetheless. In China, food prices jumped 17.5% in December thanks largely to African Swine Flu. 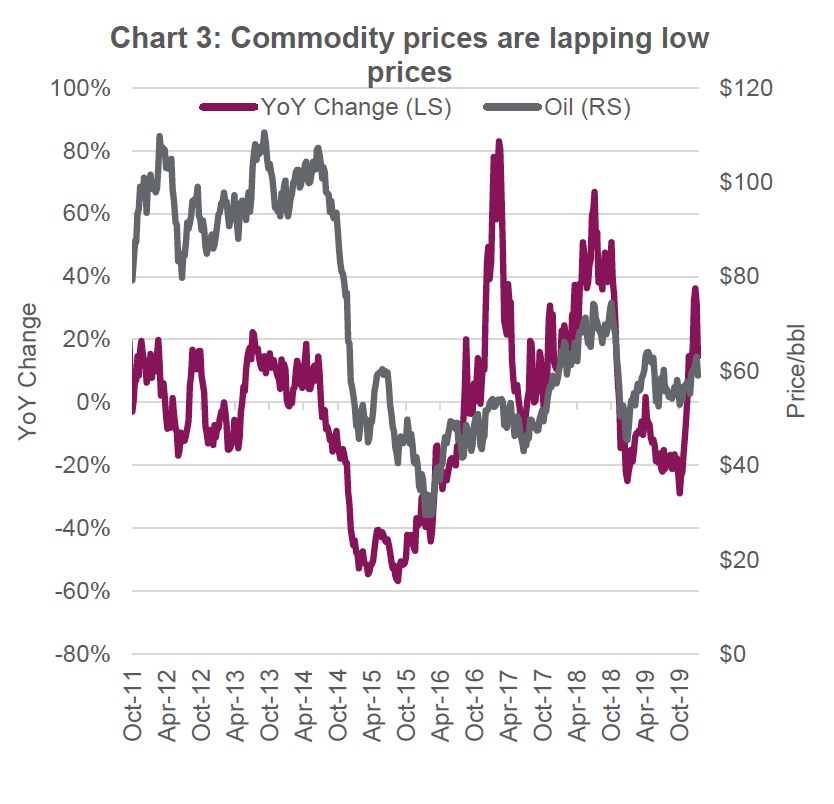 Other inflation drivers could be a weaker U.S. dollar. The U.S. dollar index appears to have stalled over the past year at elevated levels. (Chart 2) From a technical standpoint, it also just crossed through its 200-day moving average and its rising trendline. A cheaper dollar means higher import prices, and coupled with the recent revival in commodity price signals, we could be entering a period of higher levels of inflation.

Oil is the big one – rising commodity prices are lapping low prices from a year ago. Chart 3 shows the year-over-year change in crude prices. It takes time for price changes in most commodities to work their way through the economy to the end consumer, but rising oil prices make a big impact at the gasoline pump. This regular reminder can play a large part in consumer expectations. 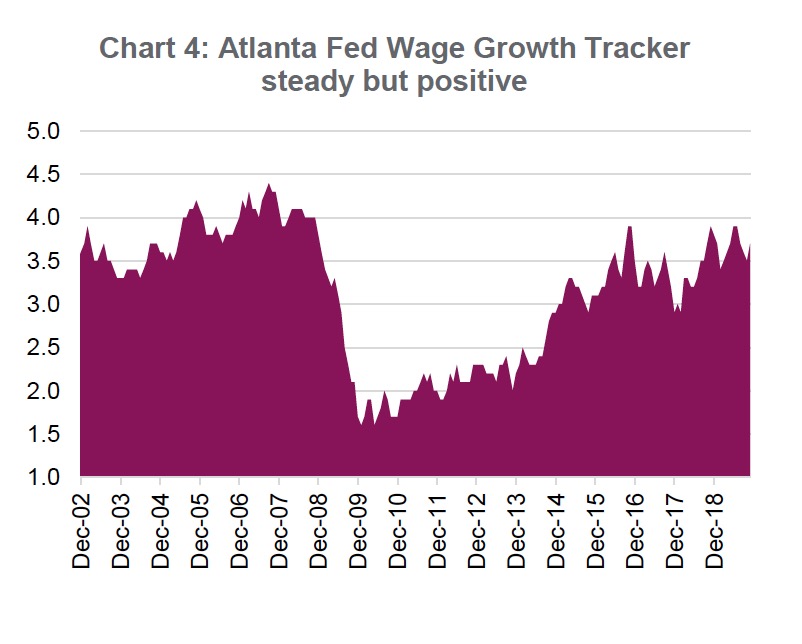 Well, we know how this story has evolved. A major deflationary force over the past couple of decades has been globalization. The world may have reached peak globalization and is now beginning to shift towards increased trade protectionism. This may be related to the rise of nationalism in developed economies, but when U.S. and China trade tensions rise, it’s the end consumer who eventually foots the bill for tariffs and rising production costs. The rise of global trade has slowed, which may be a sign that the outsourcing manufacturing trend has stabilized, thus removing this inflation dampener.

Employment and the economy 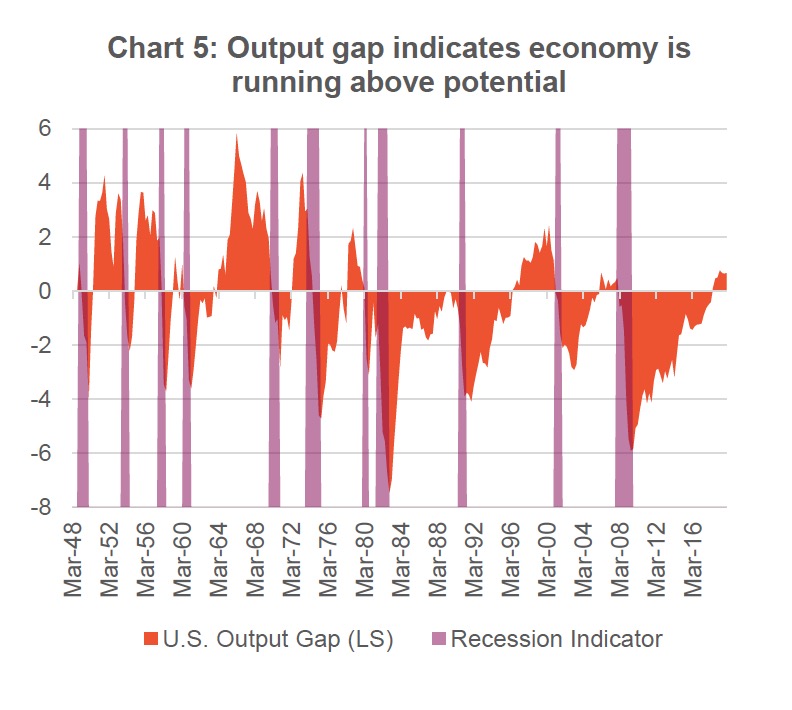 The U.S. has a very tight labour market at 3.5% unemployment – well below what the Fed would consider equilibrium. This ‘hot’ labour market has brought with it wage inflation; while it isn’t substantial, it remains elevated and steady around 3%. (Chart 4) This isn’t immaterial. One interesting headline from last week was that Taco Bell plans to offer some managers a $100,000 salary at some of its corporate-owned stores. The move was in large part to support recruitment and retention. From a demographic standpoint, the rising employment-to-population ratio does point towards an even tighter labour market, which should continue to put pressure on wages. Also, the output gap shows that there is very little slack in the economy. (Chart 5) A positive output gap typically creates an inflationary environment and, given that we expect economic growth to pick up, we’ll continue to see lots of jobs and growth in income, which will further boost investor confidence; however, consumer expectations for inflation are extremely low presently, which is perhaps one of the greatest risks or disconnects that we have come across. We believe that expectations will have to be reset, and its shifts in expectations that often catch the market by surprise. 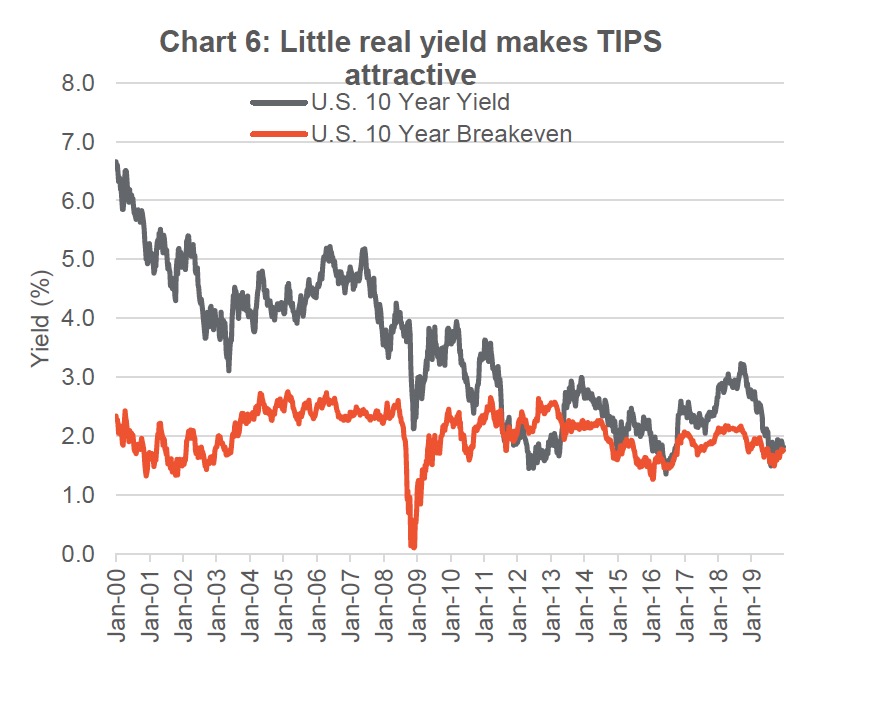 Low expected inflation and real rates have made inflation-linked bonds – TIPS in the U.S and real return bonds in Canada – relatively attractive. On a tactical basis, these securities can help shelter a portfolio from an uptick in inflation. Waiting for inflation to rear its head would mean that expectations would have already moved, and being ahead of the crowd is usually where you want to be as an investor. Allocating capital to inflation-linked government bonds is one way to benefit from rising inflation. Market participants are already moving into U.S. inflation-linked bonds, with current shares outstanding rising over the past couple of months in the TIPS ETF. While inflation-protected securities were clearly out of favour last year, more investors are opting for these securities currently. 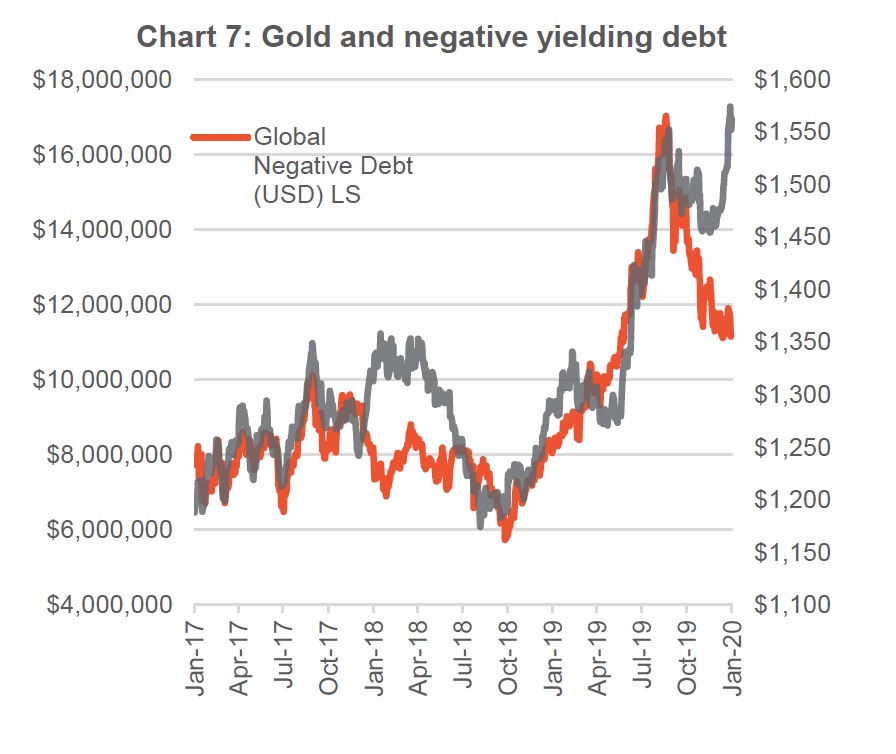 Gold is another option as an inflation hedge. First, it’s priced in U.S. dollars, which works in its favour if the U.S. dollar weakens. Second, as inflation rises and erodes the value of fiat currency, the cost of an ounce of gold rises as a result. The strength in gold prices over the past month could be signalling higher inflation ahead. The close relationship between the gold market and low/negative yields has broken down. Gold prices have managed to keep rising despite rising yields. Chart 7 shows that gold has also diverged from the amount of negative-yielding debt in the world which has fallen from a high of $17 trillion to just $11 trillion.

Finally, if we do see inflation climb, even just moderately, nominal yields will rise. This means 2020 will be a challenging year for regular or longer duration bonds.

Source: All charts are sourced to Bloomberg L.P. and Richardson GMP unless otherwise stated.

This publication is intended to provide general information and is not to be construed as an offer or solicitation for the sale or purchase of any securities. Past performance of securities is no guarantee of future results. While effort has been made to compile this publication from sources believed to be reliable at the time of publishing, no representation or warranty, express or implied, is made as to this publication’s accuracy or completeness. The opinions estimates and projections in this publication may change at any time based on market and other conditions, and are provided in good faith but without legal responsibility. This publication does not have regard to the circumstances or needs of any specific person who may read it and should not be considered specific financial or tax advice. Before acting on any of the information in this publication, please consult your financial advisor. Richardson GMP Limited is not liable for any errors or omissions contained in this publication, or for any loss or damage arising from any use or reliance on it. Richardson GMP

Limited may as agent buy and sell securities mentioned in this publication, including options, futures or other derivative instruments based on them. Richardson and GMP are registered trademarks of their respective owners used under license by Richardson GMP Limited. Richardson GMP Limited, Member Canadian Investor Protection Fund. ©Copyright January 13, 2020. All rights reserved.