What does Qassim Suleimani’s death mean for the market?

On Thursday evening, Iran’s top security and intelligence commander, General Qassim Suleimani, was killed in a drone strike at Baghdad International Airport. The strike, which was authorized by U.S. President Donald Trump, represents a potentially dangerous escalation in the growing confrontation between the U.S. and Iran.

How are the markets responding?

Markets reacted quickly to Suleimani’s death. In the hours following the strike, the S&P 500 Index fell roughly 1%, while U.S. Treasury rates are trending lower.1 Meanwhile, safe-haven currencies such as the Japanese yen and assets such as gold are rallying, and oil prices climbed by more than 4%.1

How should investors view the ongoing events?

Short-term market volatility is almost entirely driven by policy uncertainty and/or geopolitical uncertainty. This time will likely be no different. We expect that uncertainty may persist in the near term as markets await potential retaliation from Iran and disruption in the global oil markets.

However, as the charts represent, market returns have tended to be, on average, positive in the 12 months following spikes in the Geopolitical Risk Index. 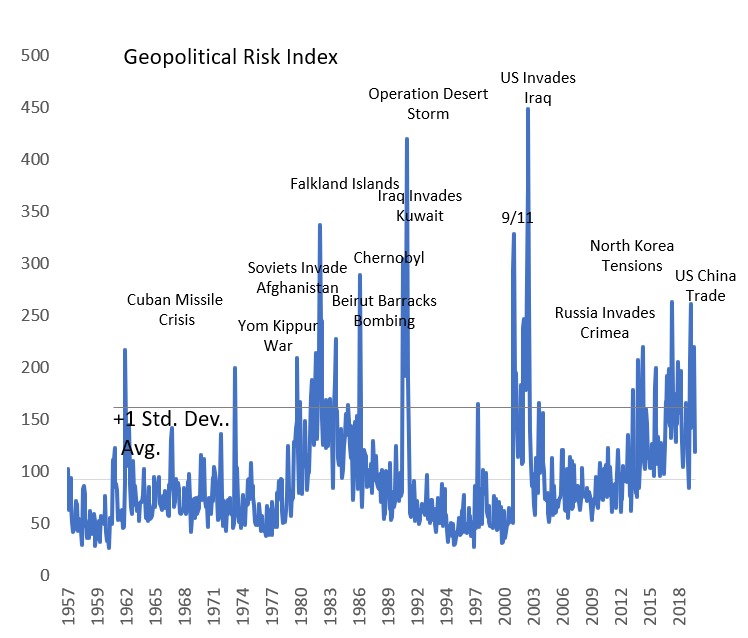 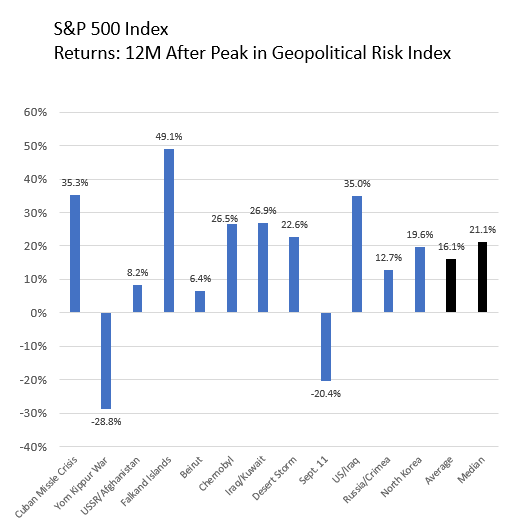 Source: Bloomberg, L.P. and EconomicPolicyUncertainty.com as of Jan. 3, 2020. Chart reflects total returns including dividends reinvested for the 12-month period following each peak. Past performance is no guarantee of future results. An investment cannot be made directly into an index.

Do the ongoing events change the larger business and market cycle narrative?

As always, investors should assess geopolitical events as to the extent that they change the overarching market narrative. This is unlikely to be the case, but we do want to follow business sentiment closely given that Iran has promised “harsh retaliation” that some experts believe could come in the form of cyberattacks on U.S. businesses.

It is important to note that the U.S. is energy-independent, and so the ramifications of heightened conflict in the Middle East on the U.S. vis a vis energy is far less than it would be just two decades ago.

Historically, regional geopolitical happenings are not the events that end business and market cycles. As an example, Iran’s bombing of the Saudi oil fields in 2019 led to short-term market volatility, in a year in which markets reached record highs.

The larger market narrative of slow growth, benign inflation globally, generally accommodative monetary policy globally, and equities still attractive relative to bonds, has not changed. In our opinion, the backdrop for equities and other risk assets remains favorable.

This post was first published at the official blog of Invesco Canada.

Five issues for investors to watch in January