Why listed infrastructure? Let’s follow the logic chain: Equity-market volatility, low fixed-income yields and increased economic uncertainty all stand as potential stumbling blocks that threaten to derail even the best-laid of plans. Amidst all of this, the value of investments that can offer potential for greater diversification and downside protection—and also serve as additional sources of income as well as opportunities for growth over time—is becoming increasingly clear.

Perhaps nowhere is this more apparent than in the listed infrastructure asset class, which continues to draw the attention of investors seeking to capture its potential benefits in multi-asset portfolios. This is due in part to the increasing mainstream appeal of infrastructure investing, which has evolved significantly since the early 1990s. Back then, the market capitalization of the broad universe of publicly traded infrastructure companies was approximately $500 billion. Today, it stands at approximately $3 to $4 trillion.1 What exactly is powering this increased demand for listed infrastructure? We believe there are six key factors responsible.

Upgrading the world’s infrastructure will likely be a dominant theme over the coming decades. In fact, per a McKinsey Global Institute estimate, a staggering $69 trillion will need to be spent on critical infrastructure by the year 2035 to keep up with projected global demand.2 In addition, given the cash-strapped positions of many governments and municipalities, there’s likely to be an increasing reliance on private capital to finance infrastructure spending needs. 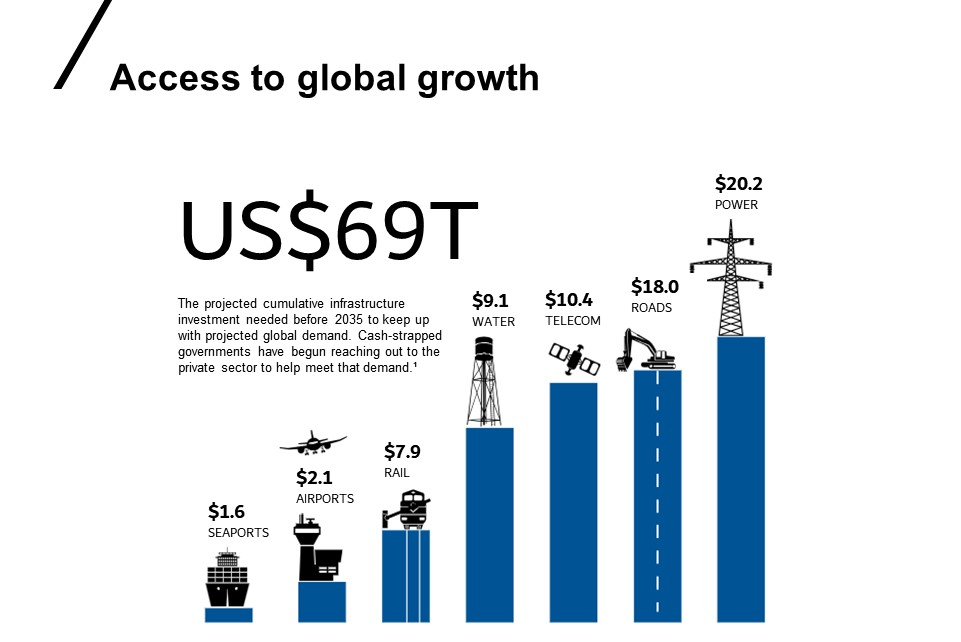 In addition to high-level spending requirements, there are also several structural growth themes at play across the infrastructure investment universe. For example:

Airports: Commercial air travel has witnessed significant growth over recent decades, with total passengers per year increasing from 1.46 billion in 1998 to 3.97 billion in 2017. By 2037, it’s expected that the number of individuals flying on commercial aircraft globally will reach 8.2 billion.3

Wireless towers: Global growth in the demand for wireless data continues at a seemingly insatiable pace. Contributing factors include increased smartphone usage, data-intensive applications that utilize live-streaming and/or video and the rise in mobile banking. Consider that in the U.S. alone, consumers used 82% more mobile data in 2018 than a year earlier.4

Renewable energy: Limiting climate change, reducing carbon dioxide emissions and improving energy efficiency is also creating significant investment opportunities. Bloomberg estimates $11.5 trillion will be invested in new power generation from now through 2050, with a significant portion of that being directed at renewables.5

In each of the examples above, owners of critical infrastructure assets are poised to benefit from positive structural trends. Given that sourcing growth opportunities in this late-cycle economic environment has become increasingly challenging, infrastructure presents a compelling choice.

While infrastructure investments have historically provided a relatively high dividend yield, just as importantly, they’ve also exhibited predictable and resilient cash flows. This cash flow resiliency across differing economic environments, as well as the ability to generate a steady income stream, is due to the fact that infrastructure assets provide essential services and typically operate in monopoly-like competitive positions. 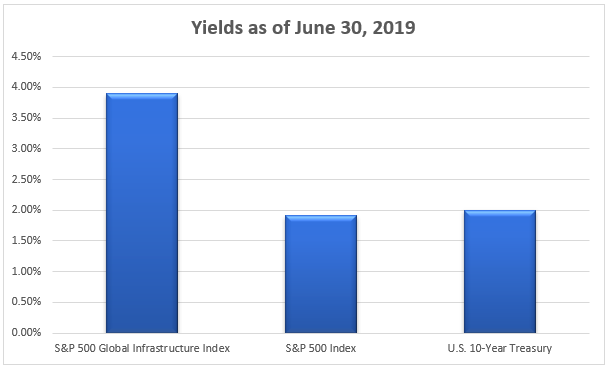 As a defensive alternative to equities, exposure to infrastructure can help manage total portfolio volatility, given its forecasted low correlations to stocks, bonds and real estate. Since 2001, infrastructure securities have outperformed global equities during 15 of the 20 quarters where the Russell Global® Index experienced a negative quarterly return. On average, the S&P Global Infrastructure® Index has outperformed global equities by 2.9% per quarter during negative quarters.9 It’s this downside protection and the potential to avoid the impact of negative compounding (remember, a $1,000 investment which loses 50% of its value has to return 100% to attain its original value) that is likely capturing the attention of investors.

The Economic Policy Uncertainty Index, which measures policy-related uncertainty around the world, is close to an all-time record, having recently notched its second-highest reading ever this past June.10 Uncertainty created by the ongoing China-U.S. trade war, as well as deteriorating economic conditions and a host of unpredictable geopolitical events, is negatively impacting both consumer and business sentiment. Given that infrastructure assets provide essential services, are defensive in nature and have resilient cash flows, it stands to reason that they’re poised to do better than more cyclical investments in these uncertain times. Indeed, the listed infrastructure asset class is forecast to log an earnings growth rate of 6% in the first year and 7% in the second year. In addition, it’s expected that dividends will grow faster than earnings, with dividend-per-share growth forecast at 8% per year over the next two years.11

A key feature of listed infrastructure is its ease of implementation. When compared to investing in infrastructure via private markets, potential benefits to investors include:

Furthermore, many of the world’s leading infrastructure companies and assets are accessible only through public markets. For example, consider the chart below12: 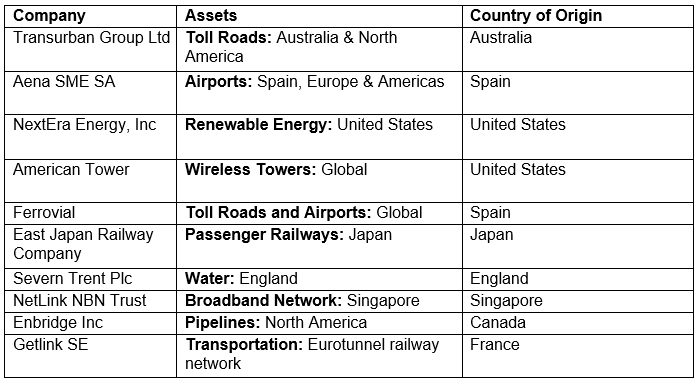 An aging infrastructure network rife with the need for upgrades, coupled with ease of access and the potential for steady returns, makes the listed infrastructure asset class a valid choice of consideration in these times of uncertainty. As the bull market grows longer in the tooth and the global economy continues to cool, we believe there’s no time like the present to consider exposure to listed infrastructure in a multi-asset portfolio.

Franklin Templeton 2019 RISE Survey: Savings Attitudes in Hong Kong and China Are Not Keeping Up with Societal Change