It has been a week since the Fed cut interest rates by 0.25% and in that time, investor confidence has worsened, not improved. The Fed hints toward a one and done rate cut were quickly overshadowed by escalating trade tensions. President Trump’s announcement of new tariffs against China has rattled investors and increased concerns not only that China could retaliate, but that the growing trade war could reduce global trade. A weakening of the Chinese Yuan to its lowest level in a decade and the US naming China a “currency manipulator” not only poured gasoline on the fire, but also indicate that the trade turmoil is having a negative impact on China and other economies.

In this environment, capital flows have taken a more defensive turn. While US markets have slumped into a mild correction, overseas markets have taken a move decisive downturn, particularly more volatile/ vulnerable areas like emerging markets and China-sensitive commodities like copper and crude oil. On the other hand, economic turmoil has sparked a flow of capital into defensive havens such as precious metals.

In this week’s issue of Equity Leaders Weekly, we look at how a deepening currency war has ignited further gains for Gold and at capital flowing out of emerging markets.

Previously, gold’s moves had been influenced by market volatility and the ebbs and flows of capital in and out of defensive havens based on short-term factors. What is different now, however, is that this Gold rally is being driven by the metal reasserting its role as a store of value and counterweight to paper currencies.

Whether on purpose or not, the recent stimulus moves made by central banks around the world, including one or more rate cuts in the US, Australia, New Zealand, India and elsewhere, has started to depress the value of paper money and boosted the value of financial assets outside the central banking system including precious metals and cryptocurrencies.

Gold had previously broken out of a downtrend, but the breakout over $1,380/oz completed a bullish Spread Triple Top pattern, completed a bullish Ascending Triangle pattern, and signalled the start of a new uptrend. Upside resistance tests may appear near $1,554/oz or $1.820/oz based on previous column highs and lows with resistance also possible near $1,715/oz based on a horizontal count. Initial support appears near $1,352/oz based on a 3-box reversal. 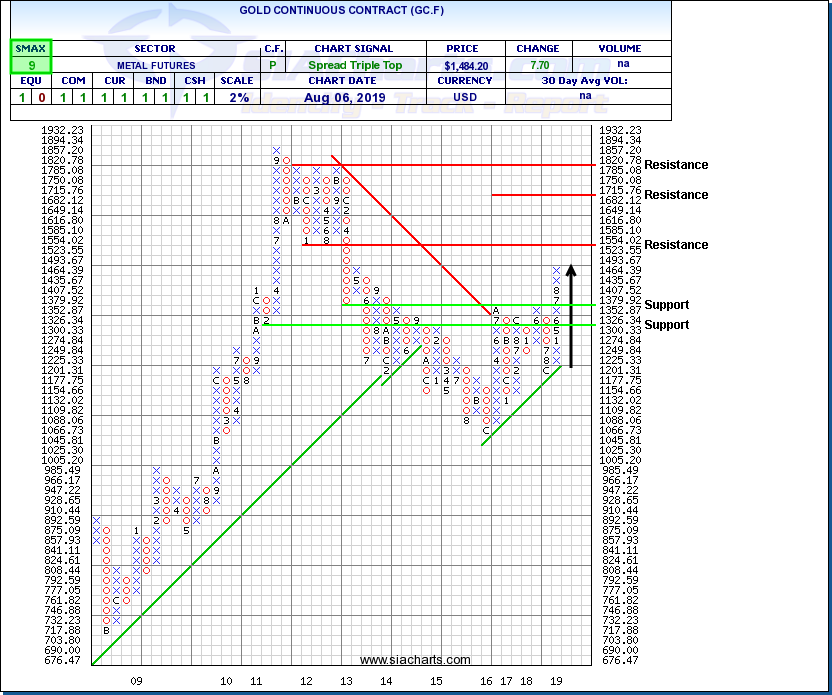 At the margins, Emerging Markets can act as an important barometer of investment sentiment, particularly attitudes toward risk. In times when investors are confident and willing to take on risk to seek higher potential rewards, emerging markets attract capital, but when investors rein in and start going defensive, they tend to pull out of emerging markets first. The broader emerging markets world is also quite sensitive to China either through direct trade or indirectly through commodity prices.

Escalating trade tensions between the US and China have stoked concerns that global trade could slow, impacting China’s economy and the demand for resources, putting energy and base metal prices under pressure. This week’s three Asia Pacific interest rate cuts indicate that central banks have become concerned about the fallout which can be seen as a warning to investors that economic risks have increased.

The iShares MSCI Emerging Markets ETF (EEM) spent much of 2018 under distribution but had been recovering through the first half of 2019. Recently, however, EEM has gone into retreat once again with a break below $39.15 not only snapping uptrend support but also completing a bearish Double Bottom pattern to signal the start of a new downtrend. Based on previous column lows, downside support could potentially appear near $37.25 or $36.15 with initial resistance possible near $40.75 based on a 3-box reversal. 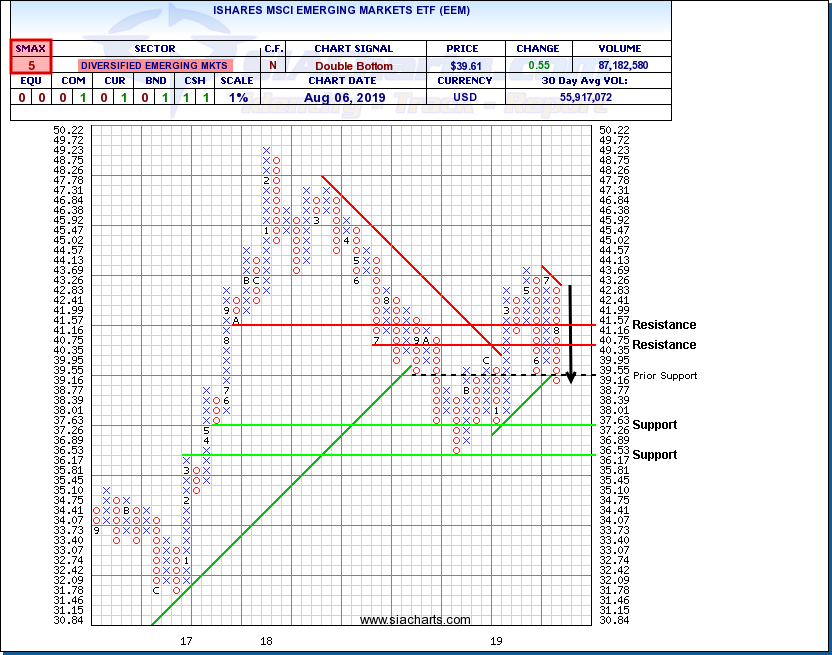 Why bonds are now the better hedge