A More Dovish Fed Signals a Change in Investor Sentiment

Last week’s Fed meeting, which hinted that we could potentially see 1-2 interest rate cuts in the US by the end of this year, sparked significant moves in world markets. The Dow Industrials and S&P 500 briefly touched new all-time highs then slumped back, but the breakout to five-year highs for Gold has turned out to be more lasting.

This week, stocks have been mixed as investors have started to consider the implications of a more dovish Fed. Chatter over whether the Fed could cut in July or September appears to be more of a distraction when considering the bigger issue. So far this century the Fed has switched from raising rates to cutting rates twice; in January 2001 and October 2007. Average losses for the Dow in the months following the first interest rate cut are as follows: 3 Months (2.97%), 6 months (7.55%), 12 months (15.40%), and 18 months (32.50%). Investors should be careful what they wish for…

If economies in the US and around the world are so soft and so at risk that central banks feel the need to step in an provide support, the outlook for corporate earnings likely isn’t as rosy as North American indices at or near all-time highs would suggest. Mixed results and guidance from companies like FedEx and Micron this week suggest that the balance of risk heading into the upcoming earnings season is shifting toward disappointment, particularly in sectors exposed to trade tensions.

In the coming week, trade talks between the US and China are likely to take over the spotlight, especially with US President Trump and Chinese President Xi expected to meet on the sidelines of the G-20 summit this weekend. Any movement toward or away from a resolution could have a significant impact on markets. Although US Treasury Secretary Mnuchin recently stated the countries are 90% of the way to a deal with a path toward completion, it’s the last 10% that is most fraught with risk and the potential for miscalculation.

In this issue of Equity Leaders Weekly, we look at how the change to a neutral to dovish stance at several major world central banks, and at what recent gains in US health care stocks are telling us about investor sentiment.

Gold staged a major breakout last week, climbing to its highest levels in over five years and continuing to trade above its $1,380/oz breakout point. Over the last few years, gold has had its ups and downs but there is a significant difference this time. Previously, gold had acted primarily as a haven in times of political and market turbulence, moving up and down with fear indicators like the VIX.

Lately, gold has decoupled from the VIX (which has been trending downward) and has taken off to the upside. The big difference this time is the shift toward a dovish stance by several central banks. While the focus has been in the Fed, don’t forget that the ECB and the Bank of Japan indicated last week that they stand ready to add monetary stimulus if needed.

Gold’s breakout over $1,380 completed a bullish Spread Triple Top and a bullish Ascending Triangle pattern, signalling the start of a new uptrend. Next potential resistance appears near the $1,500 round number then $1,555 a previous support level, and $1,715 based on a horizontal count. Initial support appears near $1,300 based on a 3-box reversal. With a bullish SMAX score of 9, GC.F is exhibiting strength against the asset classes. 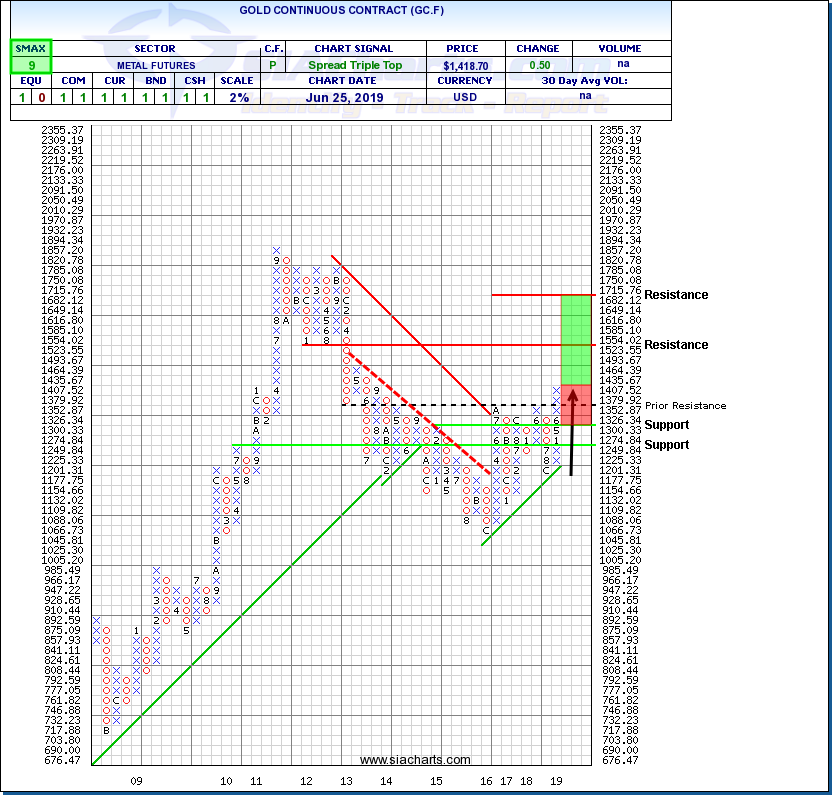 Two weeks ago, we noted in the Equity Leaders Weekly how a new high in Wal-Mart and the outperformance of discount retailers relative to the overall sector indicated a growing sense of caution among investors and consumers. Recent strengthening in the health care sector provides confirmation that even though some big-cap US indices recently reached new all-time highs, investor sentiment is becoming more cautious heading into earnings season.

The health care sector appears to be benefitting from a renewed interest in sectors that are more focused on the US domestic economy relative to sectors like agriculture, manufacturing and now technology that are more exposed to international sales and the risk that trade tensions could negatively impact their businesses. Like staples retailers, health care also appears to be benefitting from a shift in capital toward relatively more defensive areas of the market.

The iShares US Healthcare ETF (IYH) recently broke out of a downtrend clearing $193.55 and then completed a bullish Spread Triple Top pattern clearing $195.50 to signal the start of a new upswing. Initial resistance may appear at the previous high near $201.40, just above the $200.00 round number, followed by $218.10 and $222.50 which are based on vertical and horizontal counts. Initial support appears in the $187.00 to $188.00 range based on a 3-box reversal and previous column lows. With a bullish SMAX score of 7, IYH is exhibiting near-term strength against the asset classes. 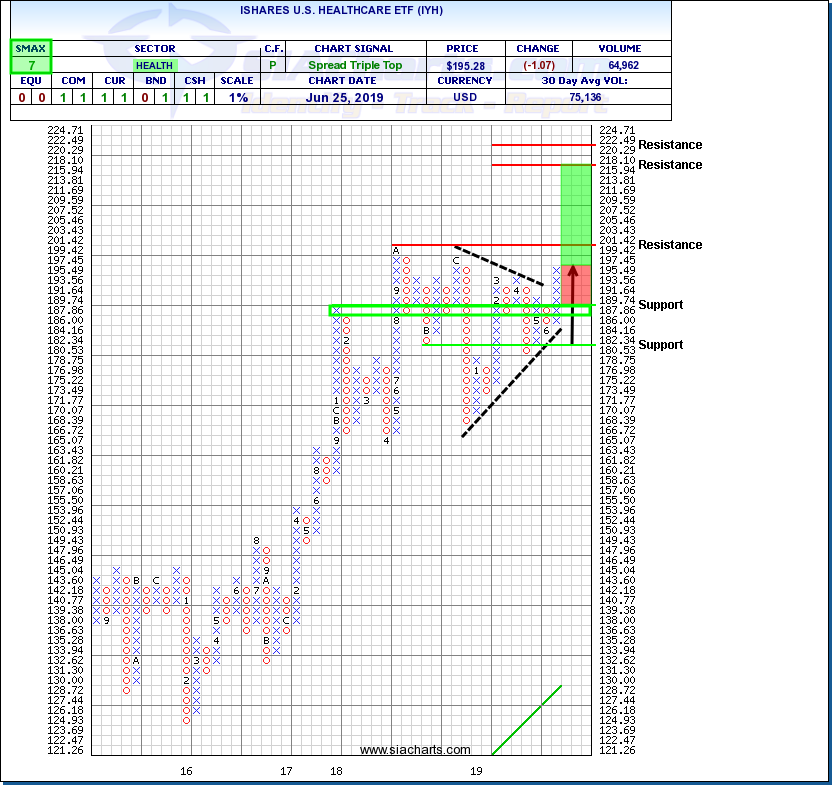 Small Caps Are Lagging. Investors Should Be More Concerned When They Lead

Jurrien Timmer: What uncertainty could mean for stocks