What the US Midterm Elections Mean for Policy and the Markets

Will Democrats retake the House of Representatives in the US midterm elections this fall? Will it matter for your investment portfolio if they do? Probably not so much, although a Democratic sweep of both houses could be more disruptive.

Who controls Congress will almost certainly influence important fiscal and regulatory policy decisions—and that matters for investors and portfolio managers. And it could have an effect on certain parts of the equity market, with different outcomes likely to favor different sectors.

But will the party leadership of Congress drive long-term investment returns? That is far less certain. For example, there’s been plenty of data showing that party control of the White House has historically had no correlation with stock market performance.

Even so, we often get asked what different election results might mean for policy and investment strategies. To answer that, we looked at three possible outcomes of this year’s vote and what each might mean.

It’s not unusual for an incumbent president’s party to lose seats in midterm elections. In each of the last three—in 2006, 2010 and 2014—the opposition party took control of one or both chambers of Congress.

Recent polls suggest that 2018 will continue the trend, with a split Congress the most likely outcome. As of September 24, the polling aggregation website FiveThirtyEight was giving the Democrats an 80.7% chance of winning control of the House. But it’s a different story in the Senate, where President Donald Trump’s Republican party has a 69% chance of holding the chamber.

Historically, the US equity market has done well during periods of gridlock in Washington (Display 1), and there’s reason to believe that markets would breathe a sigh of relief if this year’s election yields a split Congress. 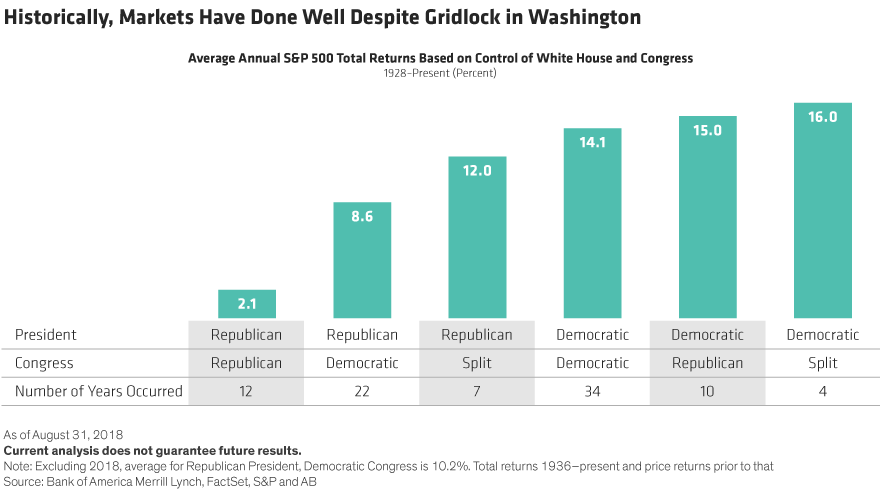 A split Congress probably wouldn’t pass any significant legislation between now and the next presidential election in 2020. With the US economy in strong shape and the equity market rolling along, markets would likely respond well to this result.

Healthcare stocks may stand to do well in a gridlock scenario, as it would likely mean no major changes to the Affordable Care Act or drug pricing. And a divided government would put the brakes on fiscal spending (additional tax cuts, extensive infrastructure spending), which may put downward pressure on US Treasury yields.

A Democratic sweep of Congress, though a less likely outcome, could be more disruptive. Total control would give the party the power to block presidential appointments and would raise the odds of a Democratic candidate winning the White House in 2020. That could put some key elements of tax reform, including the reduction in corporate tax rates and the top income tax bracket, at risk. We would expect this outcome to inject volatility into a US stock market that’s done well since Trump was elected. The S&P 500 Index was up roughly 36% as of September 24, and tax reform has likely been a big driver of that performance.

Any move by a Democratic Congress to impeach Trump could roil markets somewhat—even though the chances of Trump actually being impeached and convicted (it takes 67 senators to convict) appear slim. Even if it he Democrats take the Senate, they won’t have a two-thirds majority.

On the policy side, a Democratic sweep would likely change the fiscal spending outlook, with infrastructure spending a possible priority. That could be good news for the industrials and materials sectors of the equity market—and possibly good for bond yields if Congress raises taxes to pay for it.

A “red wave” outcome, with Republicans holding both chambers, would likely be good for equity markets but less so for bond yields, as it would likely clear the way for additional tax cuts and a bigger deficit.

Wondering what the results will mean for trade? Probably not very much. As president, Trump would retain control of trade policy no matter who runs Congress. The legislature would have to vote on a formal trade deal. But without one, policy is up to the president.

It’s also worth keeping in mind that much of what Trump has done so far has been based on executive orders rather than his working closely with Congress, with the tax reform legislation the big exception. This is unlikely to change in the years to come, particularly if the Democrats take control of part or all of Congress.

As the election nears, market volatility may wax and wane with changes in the polls. It’s certainly possible that investors who keep close track of day-to-day and hour-to-hour market swings might be able to capitalize on asset-price dislocations.

Even so, we don’t think long-term investors should lose too much sleep worrying about possible election outcomes or what each swing in the market means for their portfolios. That’s because data stretching back to 1950 suggest that the equity sectors most closely associated with secular growth—technology, consumer discretionary and healthcare, to name a few—have historically performed best during and after midterm elections (Display 2). 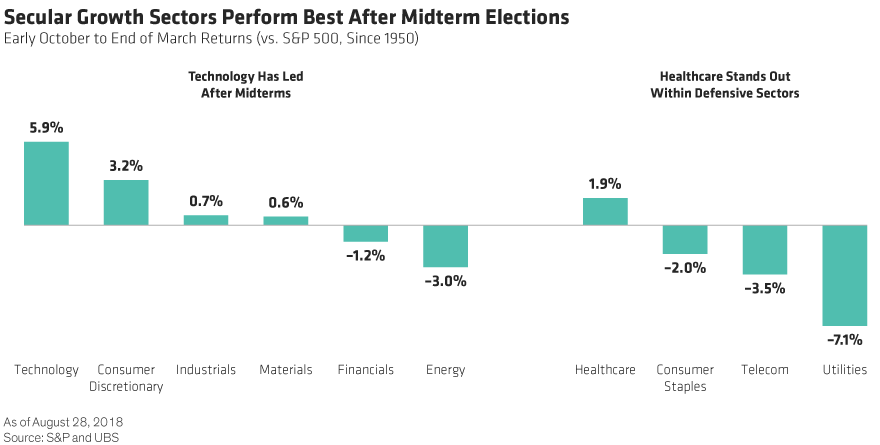 For those who can’t stomach short-term market turbulence, strategies that have historically offered better downside protection may be worth a look.

Policy matters, and investors are right to pay attention to who’s in control in Washington. But in the long run, we’re not convinced that party leadership has a lasting effect on investment returns. Markets usually find a way to adjust, whatever the election outcome.