The flattening to focus on

The flattening Treasury yield curve is getting a lot of attention, but there’s another flattening that is arguably of greater importance: the narrowing return gap between low- and high-risk assets. Jeff explains.

Expected returns on lower-risk assets have risen alongside the Federal Reserve’s policy rates, reducing the need to stretch for yield into higher-risk sectors. This has triggered volatility in the fixed income market–and underpins our defensive stance: a preference for U.S. short duration and higher-quality credit.

The SML shows the risk (volatility)-return trade-off across assets. The two SMLs on the The other kind of flattening chart below represent the yields of the broad fixed income market, adjusted for risk, for 2012–in the midst of the Fed’s quantitative easing campaign–and 2018. The 2018 trend line (green) is much flatter than the 2012 line (blue), as yields on lower-risk assets such as U.S. Treasuries have significantly increased alongside the Fed’s interest rate increases. 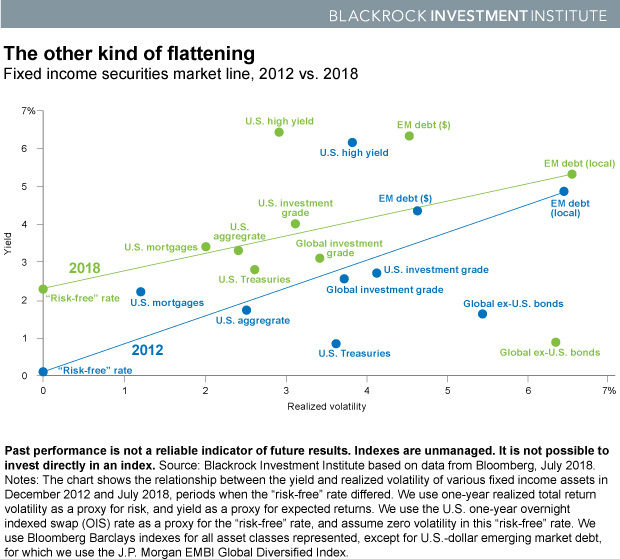 In some cases the volatility of higher-risk assets has climbed, while their yields have fallen (see global ex- U.S. bonds). The result: a flattening of return expectations across the risk spectrum that means investors today have far less incentive to stretch for yield.

For much of the post-crisis period, global monetary policies encouraged an explicit flattening of the SML. A process dubbed “portfolio re-balance” by former Fed Chair Ben Bernanke illustrates how this would help stabilize markets and stimulate growth: As the Fed bids up prices of Treasuries and mortgage-backed securities and pushes down their yields (effectively lowering yields on the lower-risk, or “short” end of the SML), investors react by moving out the risk spectrum. Eventually, the Fed hits the zero bound in interest rates (pulling down the yields on the least risky assets to zero or negative) and investors push down the yields of riskier assets. This causes the SML to flatten.

The critical question today: What happens to markets as this process goes in reverse?

We are seeing early signs of a shift. Yields on some perceived “safe” assets, such as short-term U.S. Treasuries, have risen, contributing to bursts of volatility in global fixed income markets. Why? Attractive yields on these assets–now above U.S. inflation–are heating up the competition for capital. As more money pours into lower-risk U.S.-dollar denominated assets, demand for the U.S. dollar has risen–and demand for riskier assets has declined. All else equal, riskier investments need to offer higher returns (meaning lower prices) to appeal to investors.

The renewed appeal of cash is primarily a U.S. story for now. Euro-zone investors, for example, still face negative rates at home and a hefty cost of hedging for venturing into U.S. dollar assets. This could change as other central banks such as the European Central Bank and Bank of Japan start winding back their own easy monetary policies.

Portfolio re-balancing in reverse is a tricky process. The Fed’s gradual normalization process and clear signaling of its policy intent are aimed at avoiding financial market disruption. But the volatility we’ve seen so far this year–also a result of rising economic uncertainty driven by trade disputes and potential U.S. economic overheating–suggests a more cautious approach to fixed income investing is warranted.

We advocate building ballast into fixed income portfolios. We prefer an up-in-quality stance in credit as an offset to equity exposure in portfolios. And we prefer short-duration debt and floating-rate exposures in this rising interest rate environment. Read more bond market insights in our latest Fixed income strategy.

Jeffrey Rosenberg, Managing Director, is BlackRock’s Chief Investment Strategist for Fixed Income, and a regular contributor to The Blog