The Northern Trust Economics team shares its outlook for growth, employment, inflation, and interest rates in the U.S., U.K., E.U., Japan and China.

The world economy generally performed well during the first half of 2018. A handful of emerging markets struggled, but their problems were at least partially of their own making. The major markets, in aggregate, met expectations.

But as we contemplate the outlook, satisfaction with the first six months of the year is tempered by apprehension over the spread of trade conflicts. No region has been spared, and some are especially threatened. No one wins in a trade war, but those more reliant on exports will be more highly inconvenienced.

We are still expecting the ultimate impact of restrictive trade measures to be modest, and that cooler heads will eventually craft productive resolutions to Brexit, NAFTA and the stress between the United States and China. That outcome is embedded into the base case described below. But the risk of further trade tensions creates downside risk for the second half.

The U.S. is currently outperforming. Early estimates of gross domestic product (GDP) growth for the second quarter are very strong: the first half is likely to show annualized real growth of 3% or better.

The persistent effects of the Tax Cuts and Jobs Act position the U.S. for strong growth in the second half of the year. However, we expect the expansion to downshift to a more sustainable rate in 2019 as temporary incentives from tax reform expire and the costs of trade actions become more apparent. Though growth will slow, we do not expect a
downturn. Unemployment is likely to hold at low levels through 2019. 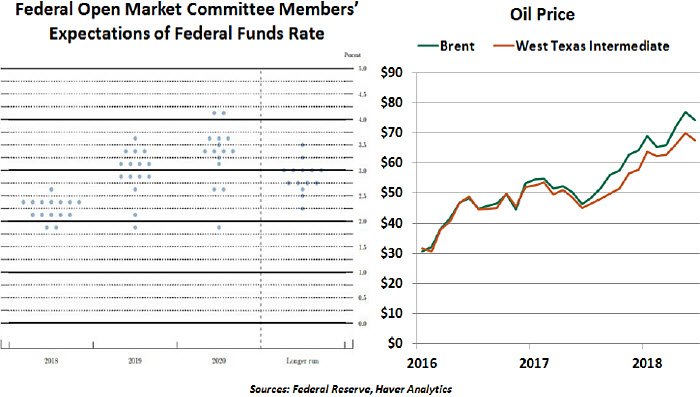 Several factors are likely to bring about a long-delayed round of inflation. Little slack remains in the labor market, and wage pressures will rise. Energy prices have already risen; though domestic oil production is also increasing, the loss of oil exports from Iran and Venezuela will only keep the heat on this market. Lastly, tariffs will inflate the costs of intermediate and finished goods.

The Federal Open Market Committee has set clear expectations of continued increases to the overnight federal funds rate as long as economic growth and inflation continue. We anticipate two more rate increases this year and three more to follow in 2019.

Eurozone: Best Days Are In The Past

After a soft first quarter driven by an outright decline in exports (the first of its kind in six years), expectations called for the eurozone economy to rebound in the second quarter. However, considering the data in hand, growth is likely to remain modest.

Though the trade environment has deteriorated, eurozone consumption has been solid. This is expected to continue, thanks to falling joblessness and the restoration of income among the newly employed.

Risks, political ones in particular, are never far from the surface in the eurozone. The recent election of a populist government in Italy, the possibility of a hard Brexit, and renewed discontent over refugees provided ample sources of anxiety in the second quarter. Externally, the tariff tiff between the U.S. and the European Union (EU) is also
a notable risk for the region, particularly for its engine, Germany. 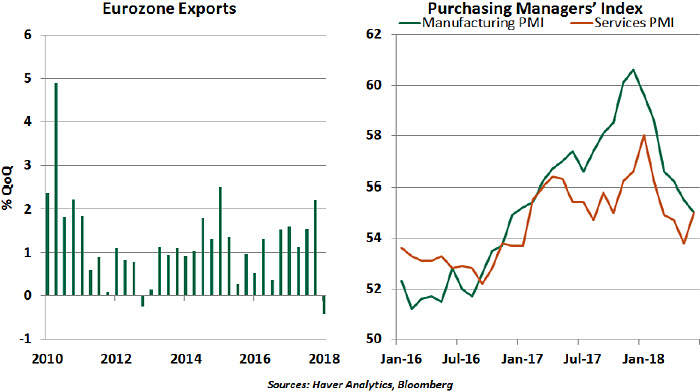 In spite of this, the European Central Bank (ECB) announced its intention to cap its quantitative easing program. It anticipates reducing its asset purchases from the current level of €30 billion per month to €15 billion per month in October and then to zero in December. Though the new forward guidance has raised expectations of an interest rate hike from the ECB late in 2019, uncertainty in the outlook suggests the first rate hike will be delivered later rather than sooner.

Two years on from the Brexit referendum, uncertainty continues to remain the only constant in the U.K. Leadership continues to wrestle with the balance between political sovereignty and economic proximity to the EU. The probability of a “hard” Brexit has declined but cannot be ruled out entirely. We expect a “softer” Brexit that preserves access to the common market.

Until more clarity emerges, Brexit-related uncertainty will continue to weigh on business investments and the broader economy. According to new analysis by the Centre for European Reform, the U.K. economy is 2.1% smaller now than it would have been at this time in the absence of Brexit. The U.K. car industry is also facing risks of possible U.S. car
tariffs.

After a softer first quarter thanks to temporary factors, U.K. real GDP growth is likely to recover through the balance of the year. The pound sterling has strengthened somewhat, which should boost real incomes in Britain but have a slightly negative effect on trade. 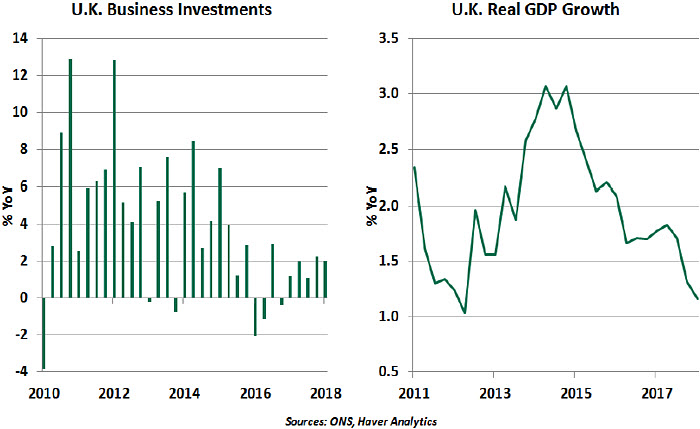 The Bank of England’s Monetary Policy Committee appears to have paved the way for a 25 basis point rate hike in August. This action could certainly be questioned, given the approach of key Brexit deadlines and rising political instability. Japan: Looking Inward For Growth

Consumption and investment are likely to be the engines of growth this year for Japan, as rising protectionist sentiment weighs on exports. Preparations for the 2020 Summer Olympics will keep construction in the forefront while consumption is likely to be underpinned by tightening labor market conditions.

Although the initial U.S. tariffs will have only a minor impact on Japan, the U.S. administration’s recent exploration of tariffs on Japanese car exports is more threatening. Interestingly, the Japanese yen has acted as a safe haven currency in the midst of recent trade stress. Should this continue, Japanese exports would be impaired.

The planned consumption tax hike (due to be implemented in October 2019) will weigh on consumer spending next year and potentially drag down real GDP growth. Prime Minister Shinzō Abe could use additional stimulus to offset the adverse effect on the economy.

The consumption tax would also serve to boost inflation, but not by enough to push the inflation rate back to the Bank of Japan’s (BoJ) target. The BoJ is therefore expected to maintain its benchmark policy rate at -0.1% and its yield control target of “around 0%” on 10-year government bonds.

Despite the surprising resilience of the economy, Chinese growth is set to lose steam in the coming quarters, thanks to a combination of domestic and external factors. On the domestic front, the Chinese economy is facing headwinds due to financial reforms, while externally, its exports are facing U.S. tariffs.

We believe there is still room for negotiations to de-escalate tensions, but the odds
of an all-out trade war are on the rise. Both sides are hardening their attitudes and engaging in tit-for-tat measures. This would result in significant economic costs not
only for China (exports to the U.S. are an important share of GDP) but also for the U.S. and some Asian economies. 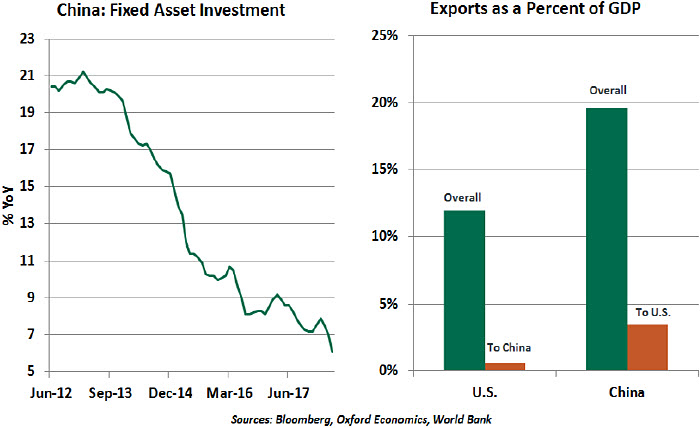 China is staring at a gradual slowdown amid slowing investments and industrial activity. Leadership is focused on cutting overcapacity, particularly in heavy industries. Chinese consumption will be required to become a bigger driver of progress.

We expect the People’s Bank of China to keep benchmark interest rates constant through the forecast period. However, the central bank will continue to use other monetary policy tools to manage liquidity in a more flexible and targeted manner. Just recently, the central bank announced its decision to reduce required bank reserves by $100 billion to provide cushion against a potential trade war; reconciling its desire to preserve growth with the need to control leverage will be a particular challenge. 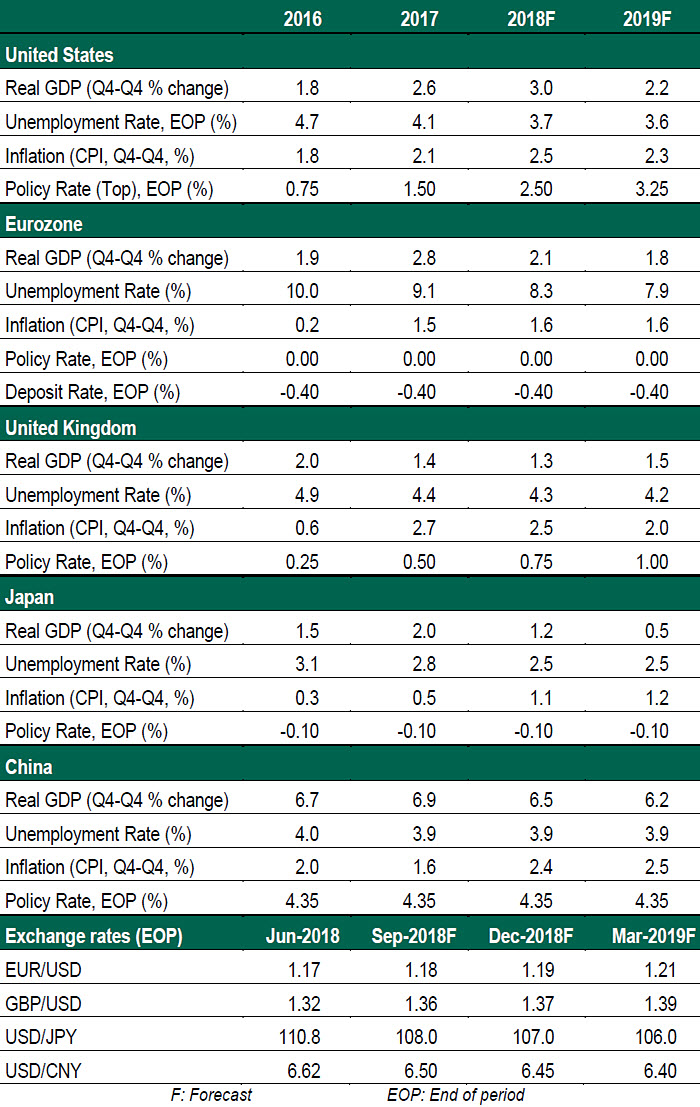