The re-opening of the capital spending spigot

Companies are finally spending after years of belt tightening. Kate explains this change and its implications for stock investors.

The current economic expansion, once decidedly capex-lite, is showing hints of change, as we write in our new Global equity outlook Capex: The good, the bad and the murky. Companies globally are notching strong earnings growth, led by the U.S. With more free cash flow to put to work, capital expenditures (capex) also are perking up.

Capex is companies’ key tool to acquire, upgrade and maintain physical assets, be it property and buildings or IT equipment. CFO and Fed regional surveys point to a notable pick-up in expected capex in the U.S. relative to two years ago. Capital spending over the next 12 months is expected to grow at its highest level since 2012, a Deloitte survey finds. And S&P 500 first-quarter earnings results confirmed U.S. companies were investing at multi-year highs.

It’s too early to make the call on a new and enduring capex regime, but growing corporate profits, greater business confidence and tax cuts in the U.S. should support investment spending in the medium term.

For most of the decade since the financial crisis, lower confidence, tighter regulation and higher policy uncertainty weighed on investment decisions and stoked risk aversion. Spending limped along despite ultra-low funding costs, low labor costs and high profitability. Fast forward to 2018: U.S. rates are rising and wages growing. One way companies can offset wage pressures is to invest in technology and machinery that lowers the need for additional workers.

The U.S. tax cuts in early 2018 gave companies another incentive to spend. The provision allowing for immediate expensing of qualifying capex means U.S. companies can deduct their investment in year one rather than having it depreciate over several years. The provision will begin phasing out in 2023, and this has companies front-loading investment. Some 37% of firms in a Duke/Fuqua CFO survey attest to doing exactly that, essentially stealing investment from the future.

U.S. companies are not boosting their capex at the expense of other activity. Dividend payments have held firm, we find. And our review of company announcements shows share buybacks and mergers and acquisitions (M&A), supported by repatriation of foreign cash, are on track to exceed $800 billion and $900 billion, respectively, in 2018. See the Cash splash chart below. These are the highest levels on record. The post-tax law spending has been broad-based: Capex and M&A are expected to increase in eight sectors and share repurchases in six, we find. Three sectors—tech, energy and real estate—are on pace to outspend in all three areas in 2018 compared to 2017. 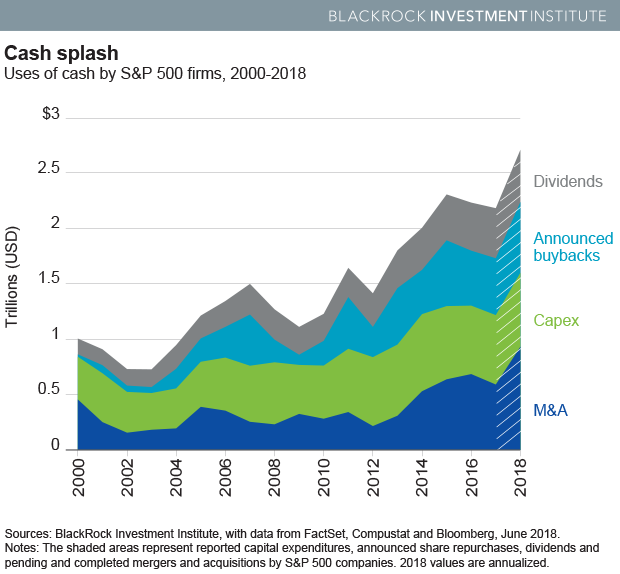 What does the capex pickup mean for stock investors?

The answer is fairly nuanced. The return of big spenders has lagged that of low capital spenders and global stocks broadly since the 2008 financial crisis. The link is not unique to the post-crisis period. A look at data back to 2000 shows S&P 500 performance sagged in the four to five quarters following an uptick in capex growth. The effect faded over longer time periods.

Yet there are caveats. First, not all capex is created equal. Spending on new projects can lay the foundation for future growth. Maintenance spend (the “keep the lights on” variety) is typically less accretive. Second, some companies are simply better at getting bang for their capex bucks.

With few exceptions, companies historically have been rewarded for conservative behavior—including low spending. We expect conservatism, in the form of strategic and disciplined spending, will remain the rule rather than the exception as company managements assess their future against a broader set of potential macro outcomes. This may make a sustained capex boom a tall order. Yet spending discipline gives us confidence in the sustainability of earnings growth. And to the extent a more enduring rise in capex growth takes hold, long-term earnings growth and returns could benefit.

This underpins our preference for stocks, particularly those in the U.S. where tax cuts provide an extra boost to earnings. Read more on the capex pickup, including whether it’s a U.S.-only phenomenon, in our full Global equity outlook.

Kate Moore is BlackRock’s chief equity strategist, and a member of the BlackRock Investment Institute. She is a regular contributor to The Blog.