2 reasons why volatility can remain low

Russ discusses why economic conditions (for now) support low volatility in the markets.

In life and markets timing is everything. In January, I wrote that a solid economy and easy credit conditions supported a continuation of the low volatility regime. Three weeks later, U.S. implied equity volatility, as measured by the VIX Index, surged 350%. While the episode quickly passed, volatility remained elevated, spiking again in March. Not the timeliest of calls.

However, since then markets have calmed. If volatility has not quite reverted back to the comatose levels of 2017, the VIX remains well below its long-term average of 20. The VIX averaged 14 in May and 12.5 month-to-date. 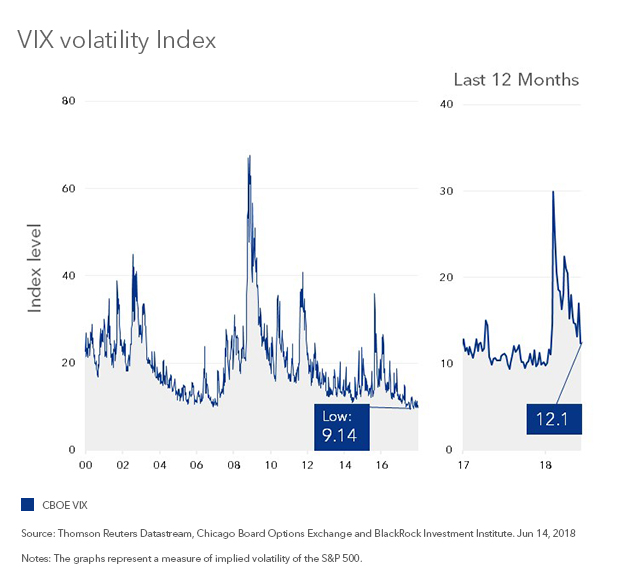 In retrospect, the winter spike in volatility looks more like an episodic bout rather than a regime change. Despite the pain of the February trade, there are two main reasons to believe that the low volatility regime can continue in the intermediate term.

1. The volatility spike was never about growth.

The proximate cause of the February scare was a higher-than-expected wage number combined with a nasty unwind of the crowded short-volatility trade. That said, the basic underlying economic fundamentals were never really in doubt. Growth remains solid and inflation contained. While parts of the world, notably Europe, are experiencing decelerating growth, the global economy is relatively good, with the U.S. particularly strong. Growth in the second and third quarters should be substantially above first   quarter levels. My favorite leading indicator, the Chicago Fed National Activity Index, has edged higher, suggesting greater than 3% growth in Q3. At the same time, while low unemployment is nudging inflation higher, the acceleration has been largely discounted by investors. In other words, the pickup in inflation is no worse than investors, and the Federal Reserve, had expected.

The exception rather than the norm

As February demonstrated, there are scary things lurking in the shadows. Few, myself included, recognized the potential impact of unwinding the short volatility trade. Nor is that the only crowded trade to pose a risk to financial markets. All of this suggests there will be more episodic bursts of volatility, particularly as we get later in the economic and market cycle. Still, the basic ingredients of low volatility–solid growth, contained inflation and easy money–remain in place. For now, episodic bursts of volatility remain just that.