by Urban Carmel, The Fat Pitch

Summary: Demographics is a key driver of economic growth (and, thus, the stock market). Many investors fret over the aging of the Boomer generation.

But the Millennial and Gen X birth cohorts are almost twice as large as the Boomers. Behind the Millennials is Gen Z, a group almost as large as the Boomers. The mid-point of these three generational groups does not enter retirement age until 2055. This prime working age group heavily consumes housing and other goods as they pass through their reproductive and household formation years. "The movement of these younger cohorts into the prime working age is a key economic story in coming years."

* * *
Starting around the year 2000, many investors began obsessing over the aging demographic profile in the United States. The concern seemed reasonable. The working age population in Japan had peaked in 1995, 5 years after the Nikkei stock index. The stock market had halved by 2000 as the working population declined (by 13% from 1995 to 2018).  Enlarge any chart by clicking on it.

The link between aging and stock prices appeared to be sound. An aging population consumes and produces less, draws down savings and equity holdings and requires greater publicly-funded services.

In the US, the largest birth cohort in the nation's history was close to entering retirement. Between 1940 and 1950, the number of births per year in the US increased by a massive 45%, and that group would begin retiring around 2005 (data from Doug Short). 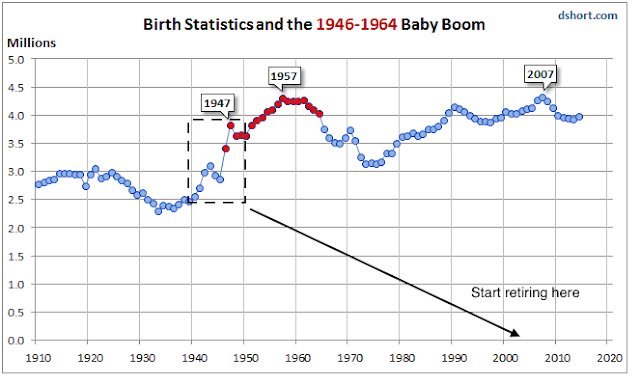 Japan had already started feeling the ill affects of a rapidly aging population and the fear was that the US was destined to be next.

What happened instead was this: an average of 3 million Boomers entered retirement every year starting in 2005, but the population of the country grew by nearly the same amount. Between 2005 and 2016, the total population of the US increased by more than 28 million.

As a proportion of the total, retired Americans has increased. That should surprise no one. Not only are Boomers reaching retirement, but successive birth cohorts are living longer. But the impact has been relatively minor. Retirement-age Americans have increased from 12.3% of the population in 2005 to 15.0% in 2016.

To put that in perspective, those aged over 65 are 27% of the population in Japan and 20% in the Euro area.

Immigration accounts for some of the differences. The more important aspect is this: the Millennial and Gen X birth cohorts (those born after 1980 through early 2000s;) are almost twice as large as the Boomers. About 4 million were born in each cohort each year. Millennials are the largest living cohort in America, overtaking the remaining Boomers, and the youngest of them are now just entering their prime working age (data from Census). 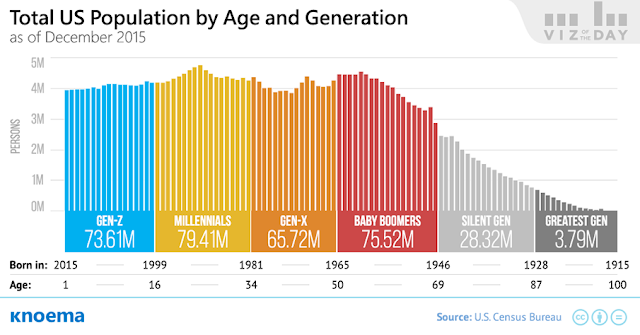 Americans aged 20 to 39 declined in the mid-1990s until about 2008. Since then, that age group has been growing strongly. Based on the birth cohorts presented above, the 20 to 39 age group will continue growing strongly past 2060. Not only is this a prime working age group but one which heavily consumes housing and other goods as they pass through their reproductive and household formation years (data in the next two charts from Calculated Risk). 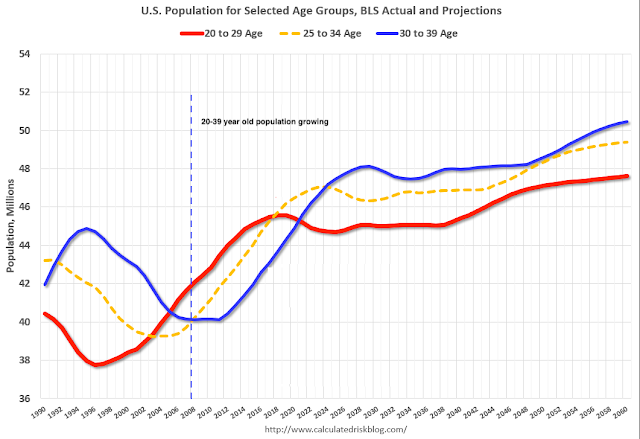 None of is to say that the US will not become older. It will.

But the US is not like many other advanced economies and the impact will likely be far less. By 2030, the top 11 birth cohorts will be the 11 youngest cohorts. 7 of these will be working age, 2 more will become working age over the following 10 years and none will be retirement age. 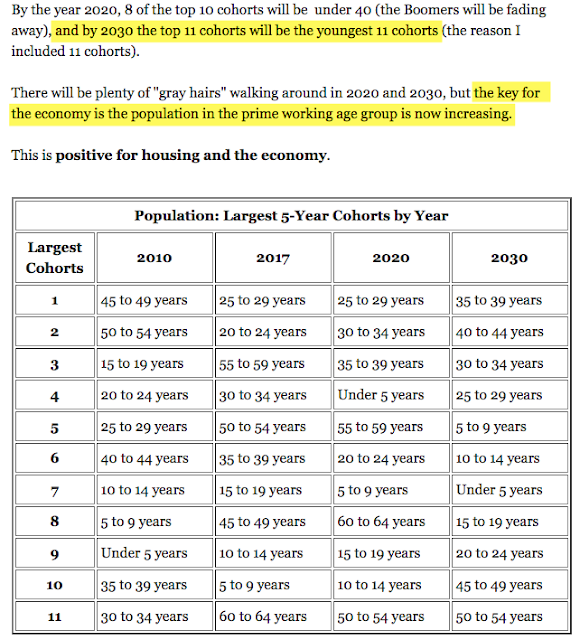 The upshot, to paraphrase Bill McBride, is this: "Demographics is a key driver of economic growth. Most people focus on the aging of the baby boomer generation.  But the movement of these younger cohorts into the prime working age is a key economic story in coming years."

Som Seif: What is Blockchain?