The Canadian REITs industry will mark its 25th anniversary in June 2018. In light of this milestone event, it is worthwhile to review the evolution of the market as well as the characteristics of the asset class.

Canadian REITs were born after the recessionary period in the late 1980s and early 1990s. There were five REITs in the Canadian market by late 1996. From 1998 to 2000, when technology stocks were soaring, REITs were trading at a discount in Canada. After the burst of the technology bubble, market participants were searching for companies that owned the hard assets, and REITs became a widely accepted vehicle, as they owned or managed the physical assets and satisfied the income needs of investors at that time. The total market capitalization of Canadian REITs grew from CAD 16 billion in June 2005 to over CAD 57 billion by December 2017, as measured by the S&P Canada REIT. 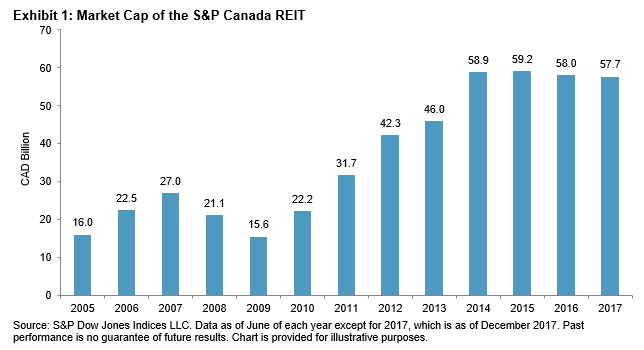 In Canada, REITs have outperformed the equities and fixed income asset classes on an annualized return basis over the past 20 years. Despite higher returns, the risk over the test period was similar to that of equities (see Exhibit 2). Over the period studied, the average rolling 12-month correlation of REITs against equities was 0.43, while that of fixed income was 0.21. Correlations of REITs with traditional asset classes are time varying, and the correlation with equities reached a peak of 0.89 shortly after the 2008 financial crisis (September 2009) and gradually fell to 0.29 by December 2010. 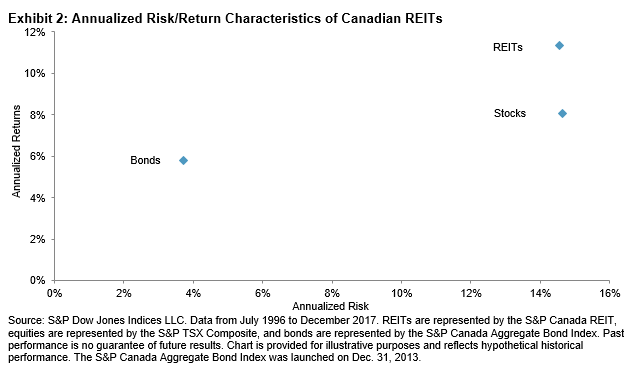 REITs Have Low Correlation With Other Dividend-Paying Equity Sectors

In the next blog, we will explore in detail the S&P TSX Capped REIT Income Index, which is designed to serve as an income-producing strategy.