The surprising way the bond market matters for stocks

Stocks are expensive by most measures. Russ discusses why the bond market can impact whether that can be sustained.

One of the reasons stocks have done as well as they have in 2017 is that earnings growth has rebounded. Unlike recent years, when stocks were driven largely or exclusively by multiple expansion—i.e. investors willing to pay more per dollar of earnings—this year’s gains have come from companies actually producing stronger earnings. This is supportive of the market.

What is less supportive is the cumulative effect of years of multiple expansion, a trend that has left U.S. equities expensive by most metrics. Whether or not stocks can continue to sustain current valuation is partly dependent on what happens in the bond market, but just not in the way many people think.

When comparing stocks to bonds, investors typically focus on the relationship between interest rates and equity multiples. This is both empirically evident and based on basic finance, i.e. a lower discount rate supports higher valuations. Unfortunately, this relationship has been less relevant in the post-crisis environment of already low rates. Instead, investors need to focus on two more nuanced measures: the term premium and bond market volatility.

The term premium measures the marginal return to investing in a long-dated bond versus constantly rolling a series of shorter maturity instruments. While normally positive, it has been unusually low or negative in recent years.

This is important. Since 2010 the term premium has explained roughly 40% of the variation in the S&P 500 earnings multiple (see the chart below). Price-earnings (P/E) ratios have averaged 18.5 in months when the term premium was below 0.5, roughly the post-crisis average; in all other periods multiples were below 15. 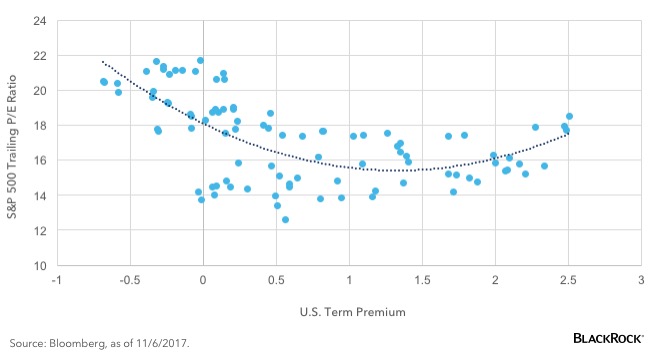 Why does this matter? It matters because negative term premiums and repressed volatility are unique features of the post-crisis environment. They are also both related to the Federal Reserve’s (Fed’s) ultra-accommodative monetary policy. As the Fed removes monetary accommodation, it is unclear if these conditions are sustainable.

Common sense would suggest that just as building up the Fed’s balance sheet compressed the term premium and suppressed volatility, the reversal should have the opposite effect. What is less certain is the magnitude. For now, investors seem to believe that any rebound in the term premium or volatility will be modest and slow. If that proves wrong, expect lower multiples and a less benign environment for stocks.

How vulnerable is the stock market?