The search for a Federal Reserve (Fed) chair has dominated headlines in recent weeks, but the overall makeup of the Federal Open Market Committee (FOMC) may have a bigger impact on monetary policy decisions in 2018. The FOMC is made up of 12 individuals: 7 are members of the Fed Board of Governors and the remaining 5 are presidents of individual Fed district banks. The president of the New York Fed is a permanent member of the committee, while the remaining 11 rotate on a yearly basis. The makeup of doves (those who want looser monetary policy) and hawks (those who want it tightened) is likely to have a bigger impact on the overall path of monetary policy than the single, though influential, Fed chair.

Janet Yellen, with her relatively dovish policy stance, would likely be an easy choice for President Trump; however, she is a Democrat and has also repeatedly defended the current financial regulatory framework, while the current administration has advocated for less regulation. Fed Governor Jerome (Jay) Powell is similar to Yellen from a monetary policy perspective, but his public comments tend to favor a more balanced view on regulatory policy. Powell, the current favorite to lead the Fed, is a Republican but has bipartisan support (he was originally nominated to the Fed Board of Governors under President Obama) and would likely make it through confirmation in the Senate easily. Gary Cohn (dove), the President’s Chief Economic Advisor, and former Fed Governor Kevin Warsh (more hawkish) remain in the running, though they are likely toward the bottom of the list. John Taylor, a Stanford economist and architect of the widely known ‘Taylor Rule’ who reportedly impressed the President during a recent meeting, would be a more hawkish choice given his systematic views on monetary policy.

President Trump has indicated that he will announce his choice for Fed chair by November 3. If Taylor or Warsh are chosen, rates may likely increase (and bond prices may fall) on expectations of tighter monetary policy ahead. The ideal choice for markets would likely be Yellen, given that she is a known entity (and dovish), but Powell would be a close second.

The President's choice of Fed chair will also be an important signal to markets of how he may fill additional Fed vacancies. The Fed Board of Governors is a seven-member panel, though three of those positions are currently vacant. Two positons were open when the President was elected. Former Governor Daniel Tarullo resigned in April, while Vice Chair Stanley Fisher stepped down effective mid-October for personal reasons. The Senate did recently approve the President's pick for Vice Chair of Supervision, Randal Quarles; Marvin Goodfriend, a Carnegie-Mellon professor of economics, has been floated as another possibility, though a nomination has not yet been made. President Trump has publicly said that he likes low interest rates, but both Quarles and Goodfriend are considered hawks, which may indicate that he actually plans to install a more hawkish-leaning Fed. Also, if Powell is chosen as chair, it will create one more vacancy for his current role of Fed governor.

Given these vacancies, it is possible that President Trump could end up nominating more than one person on his current list of Fed chair hopefuls, potentially appointing both a Fed chair and vice chair (a Powell-Taylor combination has been the subject of speculation in recent days).

Figure 1 shows the makeup of the current FOMC, including a breakout for the rotating part for 2017 and 2018. In 2017, there were three doves and one centrist, but in 2018 the makeup will change to two hawks and two centrists. This move alone will push the overall FOMC toward a more hawkish bent, at least for 2018, regardless of what happens with vacancies. 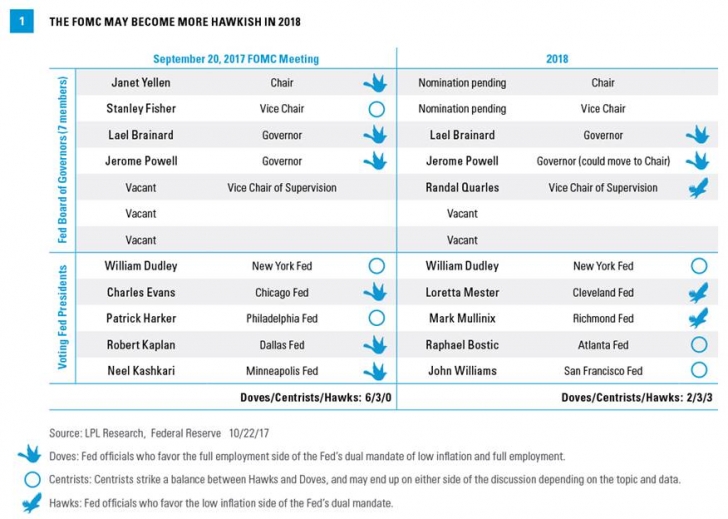 [BOXOUT] President Trump’s choice for Fed chair will no doubt be important, both on its own merits and as a signal of future picks. The chair role is the public face of the central bank, and by a strange coincidence the height of the Fed chair over time has tended to foretell the direction of interest rates [Figure 2]. Joking aside, the chair is a very important position and is one of the most influential voices in monetary policy decisions. 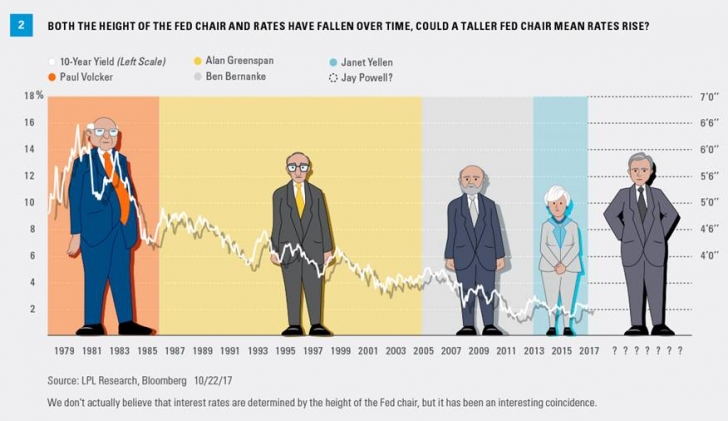 The search for the next Fed chair is likely to continue to generate headlines over the next couple of weeks. A hawkish appointment to the influential role could lead to market volatility, including a move higher for interest rates. However, investors should keep in mind that in addition to the chair appointment, there are additional vacancies on the Fed Board of Governors, who also vote on monetary policy. The appointments to these vacancies, along with the rotation of four new voting Fed presidents on the FOMC, could potentially mean a more hawkish Fed in 2018.

The opinions voiced in this material are for general information only and are not intended to provide specific advice or recommendations for any individual. To determine which investment(s) may be appropriate for you, consult your financial advisor prior to investing. All performance reference is historical and is no guarantee of future results. All indexes are unmanaged and cannot be invested into directly.

Government bonds and Treasury bills are guaranteed by the U.S. government as to the timely payment of principal and interest and, if held to maturity, offer a fixed rate of return and fixed principal value. However, the value of fund shares is not guaranteed and will fluctuate.