Commodities Prices Rose for the Third Week in a Row

Commodities Prices Rose for the Third Week in a Row

by James Picerno, The Capital Spectator

Last week’s performance leader: commodities, which posted a gain for the third week in a row, based on a set of ETFs that track the major asset classes. The rise has barely made a dent in the steep year-over-year loss that still weigh on commodities overall. But the rally so far this year for prices of raw materials generally is the strongest since the bear market started pinching these markets in 2014.

The generally positive returns for assets last week lifted an ETF-based version of the Global Markets Index (GMI.F), an investable, unmanaged benchmark that holds all the major asset classes in market-value weights. GMI.F climbed 0.5% for the week through Apr. 22, building on the previous week’s solid gain. 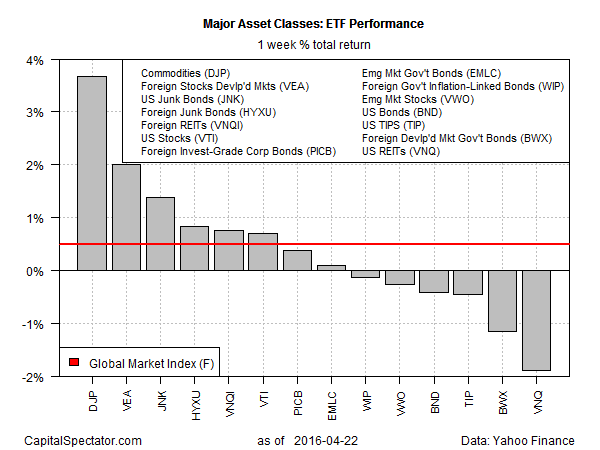 Red ink is creeping back into the trailing one-year profiles, however. Most of the major asset classes are nursing losses on this front. The biggest loser overall is still commodities: DJP is off a bit more than 20% for the year through Apr. 22. Although the performance bite is moderately lighter compared with recent history, the prospects for a gain for the trailing one-year period is nowhere on the near-term horizon.

Meantime, foreign junk bonds are in the top spot over the past year among the major asset classes. HYXU is up 4.2% (total return) for the trailing 252 trading days through Apr. 22.

Red ink continues to weigh on GMI.F for the one-year column. The benchmark is off 2.0% compared with the year-ago level in total-return terms. 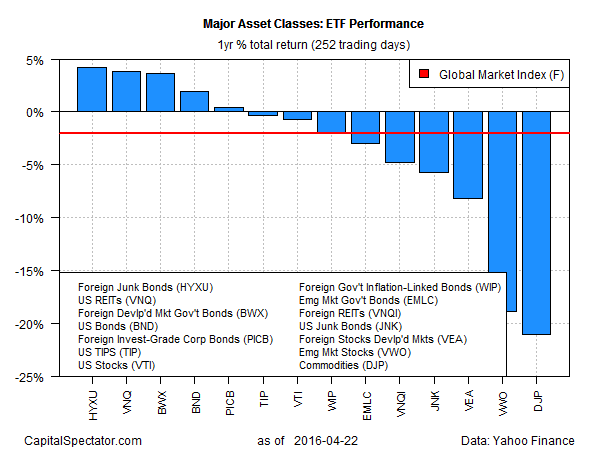 The recent rally in commodities inspires some analysts to consider an extended run of firmer pricing. “If history is any guide, we’re standing at the edge of 40%–96% returns over the next two years,” advised Meb Faber, chief investment officer of Cambria Investment Management, in a blog post last week.

Researchers from other corners are also painting an upbeat future for this slice of global markets. The Financial Times, for instance, today noted “recent signs of a revival in Chinese demand for commodities such as iron ore have been met with scepticism. But there may be stronger grounds for optimism than many think, according to analysis by FT Confidential Research, a unit of the Financial Times.”

Deciding if the recent upturn for commodities is the genuine article—or another sucker’s rally that turns into even lower prices—is still open for debate at this stage. One excuse for reserving judgment: short moving averages remain below long averages. For instance, DJP’s 50-day average is still under its 200-day average, which suggests that upside momentum of late remains vulnerable to reversal.

Nonetheless, the tide has been turning by other yardsticks, as the recent rise of the 50-day average over the 100-day average. As such, the next several weeks may provide a test for deciding if latest pop is the real deal. For the moment, cautious optimism prevails, although skeptics will note that there’s been several false dawns for commodities in recent years. The burning question for the second quarter: Is it different this time?

Jeffrey Saut: Wait until you get a pitch right where you want it!