Healthcare stocks led much of the market's rally off the 2009 lows - especially since early 2011.  That was then.  This is now.  Technical conditions have deteriorated immensely since the Spring of this year when warning signs emerged (see "Healthcare Stocks Are Vulnerable To Weakness Ahead").  Negative divergences on the weekly MACD warned us of potential momentum issues.  Now we're seeing the confirmation in terms of major support breakdowns on the weekly chart and very bearish behavior as resistance was recently tested.  Take a look at the chart: 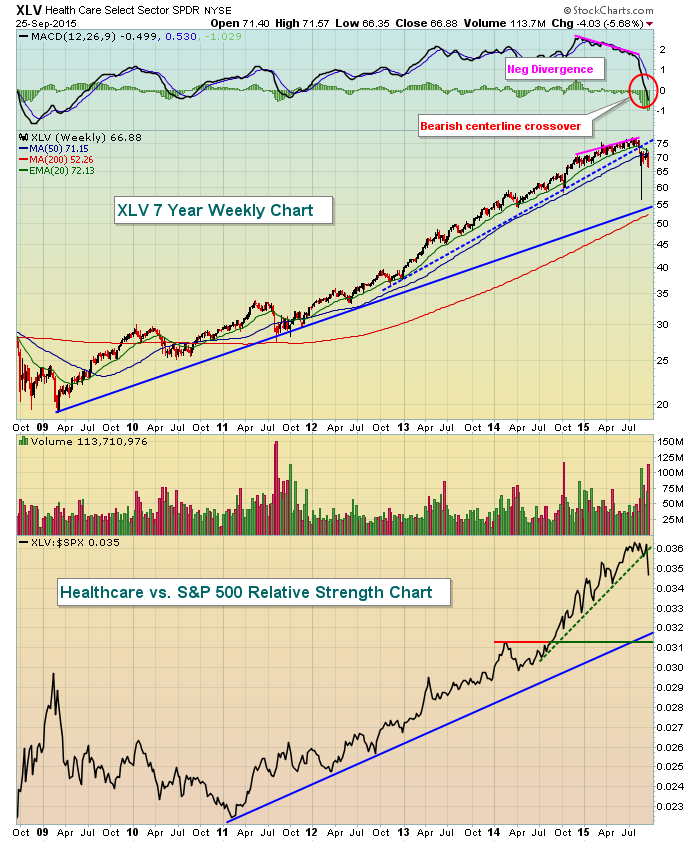 For the first time since 2011, the 20 week EMA is pointing lower.  Worse yet is the fact that we tested that now-declining 20 week EMA on our last rally attempt and failed.  With the weekly MACD making a bearish crossover of its centerline and a failure at 20 week EMA resistance, it appears to me as if this group is heading lower over the intermediate-term, especially on a relative basis.  Look for that blue relative uptrend line to be tested in the months ahead.  That suggests to me to look elsewhere in terms of long positions in the foreseeable future.

About This Blog: The Don't Ignore This Chart blog contains daily articles with intriguing or unusual charts selected by one of our Senior Technical Analysts, along with a short explanation of what exactly caught their attention and why they believe the chart is worth noting.

Precious metals could rally, break out from downtrend

How NOT to wipe out with momentum