by The Short Side of Long

Usually at the end of every month I summarise sentiment of major asset classes via a newsletter update. However, since the sentiment conditions have not changed all that much since the last month, I thought that it would be appropriate to look at a topic that I get quite a few emails about: global stock markets and which one to buy or sell? In this issue of the newsletter I will look back at several decades of history to see the price and performance of various global stock markets and why I think big moves might be coming in Emerging Markets stocks… particularly Russian, Chinese and various other Asian indices.

Chart 1: Over the last 5 years, US equities have returned 20% per annum 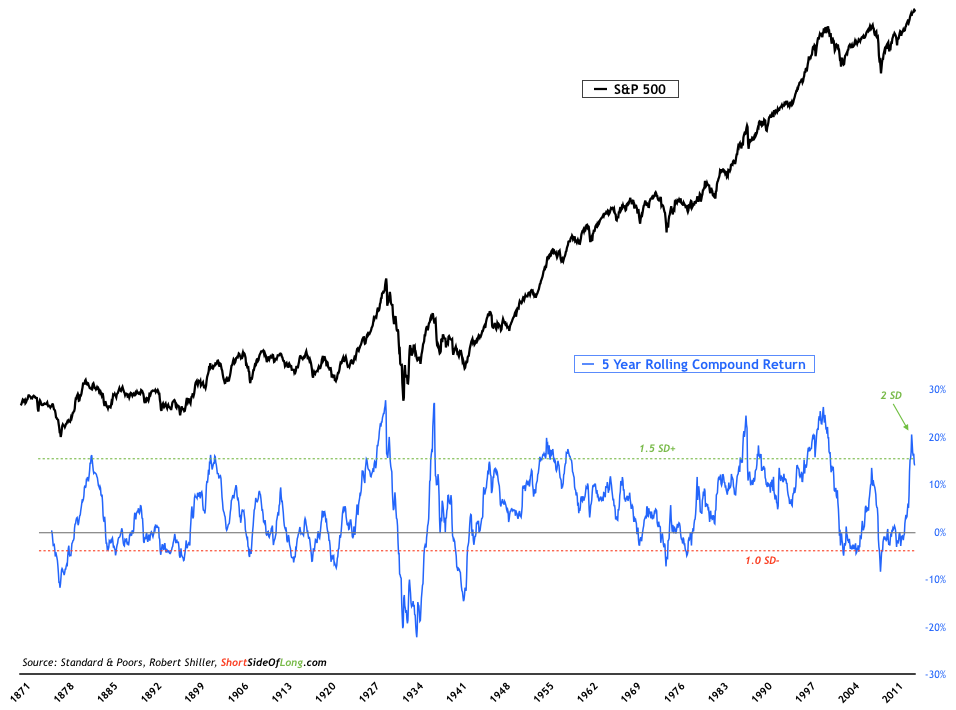 However, before I start there needs to be a word of caution. United States is still a global financial leader, with the deepest and most liquid markets. It’s stock market is still one of the main driving forces that impacts many other regional stock markets around the world. Therefore, it is very prudent for investors to understand that the future returns of the US stock market could be very vulnerable from here onwards.

If we observe Chart 1, we should be able to see that the 5 year rolling compound rate of return for the S&P 500 was recently as high as 20 percent per annum. In other words, over the last 5 years, investors have enjoyed on average a 20% return per year, every year. Not only is this rate of return incredible, but it is also a historical anomaly at two standard deviations above a 140 year history.

Using Robert Shiller’s data dating back to late 1800s, this type of rate of return over half a decade has only occurred four other times. These were into 1929, 1936, 1987 and 2000. These dates should all sound very familiar as the stock market experienced a major crash in every instance over the coming 12 to 24 months. Does that mean another crash is coming? There is definitely a decent risk that it is.

Chart 2: Chinese equities have consolidated since the 2007 blow off top 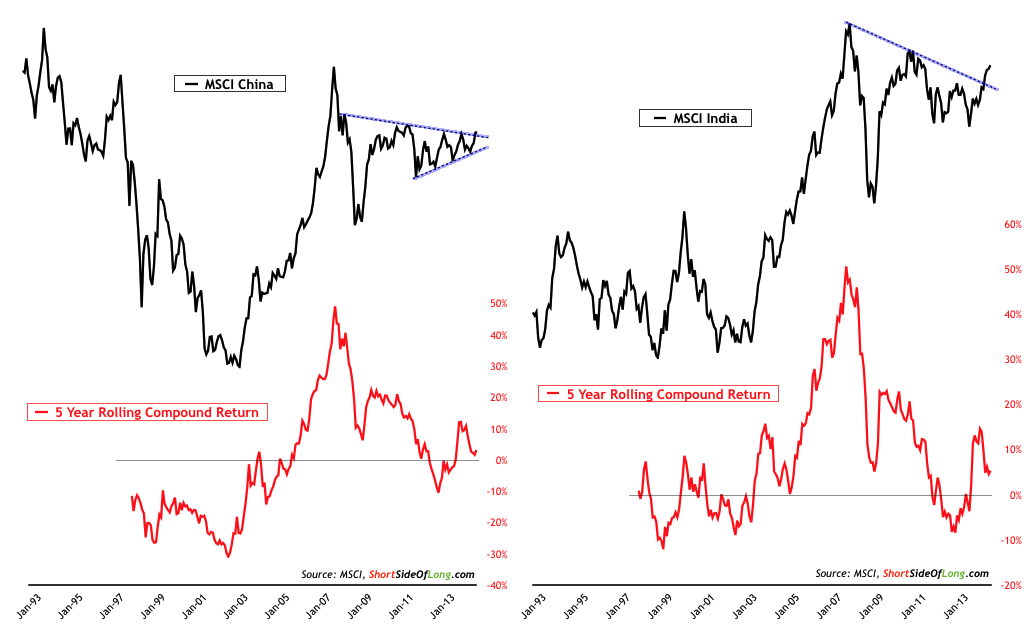 So now that we have warning massage out of the way, let us look at what is cheap both nominally and relative to the US. Keep in mind that I will not be discussing any in-depth fundamentals regarding countries or regions, as it is your own job to do fundamental research. I will also not be discussing in-depth valuations metrics for various countries, as this is also something you need to do as your own homework. What I will be discussing is the price and performance of various global stock markets, which could be more attractive from the value investing perspective.

If you have been a regular reader of the blog, you most likely would have paid attention to the recent posts regarding Emerging Markets. Previously, I have covered extremely low EM price to book valuations, price breakout and breadth participation improvements. I have also discussed a possibly that Chinese stocks have bottomed out; and even if they haven’t that there is a strong probability of outperforming US equities either way.

Chart 3: Chinese equities are staging breakout from a 7 year downtrend 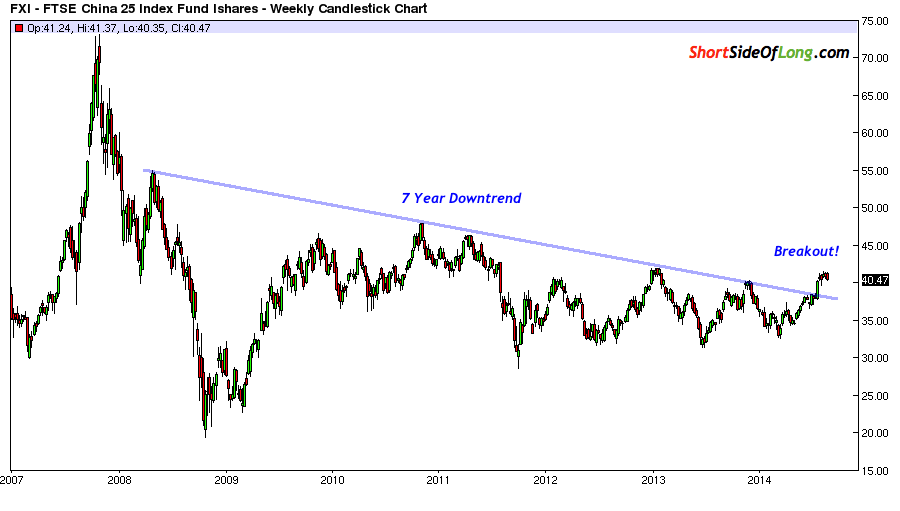 Source: Bar Chart (edited by Short Side of Long)

Assuming you are an investor with a long term perspective, one should definitely look at China as an investment opportunity right now. We should all know a thing or two about China and its future path of becoming a dominant country in the 21st century. And as contrarians we should all participate in this story as it unfolds. However, the best time to buy China is when others are bearish as they are today. This gives us a potential of better (cheaper) entry points as the country continues it secular rise towards more developed economic future.

Gauging sentiment isn’t always easy. Away from the fund flows, analyst recommendations and various surveys, on my last trip around Asia I really got to feel the negativity towards the China’s future economic prospects. Various trades, brokers, analysts and bankers I had a pleasure of meeting were all expecting disappointment from China in coming years (all but a handful I met in Singapore – you know who you are). One trader that works for a major investment bank in Hong Kong even told me that he was afraid that China could crash and end up being more of Pakistan or Zimbabwe, rather then the next great country.

The negative mood has been present all while earnings keep improving. The market traded at forward price to earrings ratio of almost 25 during the 2007 blow off top (please refer to Chart 4). This was one of the most expensive valuations in the last 15 years. At the same time, the 5 year rolling compound rate of return reached 50% (observe Chart 2 closely). In other words, Chinese equities were gifting investors a 50% return on average very year for the last 5 years into 2007. Wow!

These days the valuations are quite low, as the index trades just slightly over 8 times forward P/E. Furthermore, priced in US Dollars, Chinese stocks have been in a downtrend for 7 years now. This is a completely different story to the record breaking run of US equities since March 2009. So could the Chinese market now play catch up? Looking at Chart 3, we can see that some type of change could be taking place as the index attempts a breakout!

Russian stocks, on the other hand, are even cheaper and for the obvious reasons too. The crisis in Ukraine continues to escalate, which is putting selling pressure on all Western and Eastern European stock markets. Growth has once again came to a grinding halt in Eurozone, while Russia is now most likely entering a technical recession. Sanctions are currently hurting both sides and for these reasons (and many others) Russian stocks have not entered a recovery mode like their Chinese counterparts (see in Chart 5).

At forward price to earnings ratio of below 5, which is usually only witnessed at major bottoms like 1998 / 2001 / 2008, I believe that Russian stocks a great investment prospect. And while we are on the topic of sentiment and negative outlook, Russia probably takes one of the top spots here. While Chinese stocks might be a buy right now, I would probably start purchasing Russian stocks on any future meaningful weakness.

Some of the indicators to look out for would be a further spike in Russian interest rates, as well as a collapse in both business and consumer confidence. Certain investors might question this and wonder why would I want to purchase Russian stocks if these major economic indicators deteriorate? After all, rising interest rates would hurt economic growth via falling profits and slower credit growth. At the same time, a collapse in confidence from both consumers and businesses indicates a major slowdown of economic activity.

Well, my answer to this would be that markets are a discount mechanism, so from a contrary point of view as bad news is becomes more and more priced in, a sound bottom can be made and a recovery eventually restart. And since stocks are the cheapest during times of economic slowdown or geopolitical tensions, just as others are selling you should be buying. In other words, gloom and doom is investor’s best friend.

Chart 5: Russian stock market remains in a downtrend for the time being 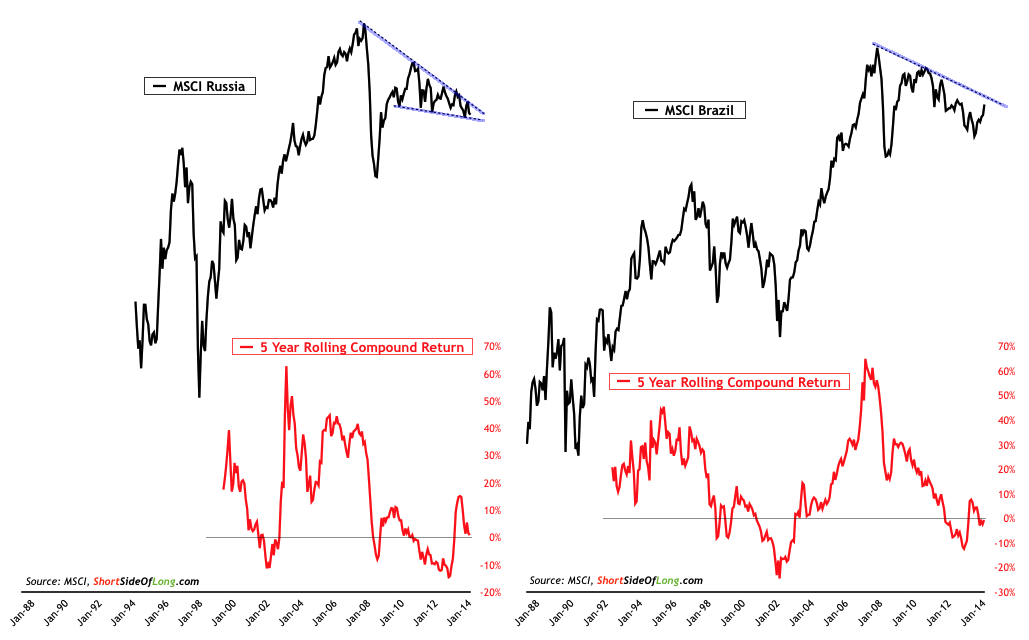 Copyright © The Short Side of Long

Demography Having an Impact on Inflation and Bond Yield (excerpt)