Governments and businesses are increasingly investing in water infrastructure and technology to meet growing demand. As a result, we believe that companies tied to meeting water demand have good long-term investment potential.

Consumers in the United States often take for granted their access to a clean and plentiful water supply. However, access to water varies globally, and useable water isn't always available where and when it's needed. For example, China has 20% of the world's population and yet is estimated to have only 7% of its freshwater reserves. The country is now spending an estimated $40-65 billion and may relocate hundreds of thousands of people in order to divert water as part of the giant South-North Water Transfer Project.

What types of companies are in the water sector?

Companies in the "water sector" are roughly 50% industrials, 40% utilities and 10% other, and the consensus earnings growth forecasts for most over the next five years are in the 5-15% range. We favor companies in the industrials sector, as they're most likely to benefit from an investment cycle to upgrade infrastructure and improve the efficiency of water use. Industrials companies in the water sector are multinational and often headquartered outside of the United States, so investors may need to look beyond our borders to get good exposure to the group, or use diversified vehicles such as mutual funds or exchange-traded funds (ETFs). Utilities companies are typically a lower-growth way to invest in the water theme and tend to be domestically oriented.

Water infrastructure and technology investment can make fresh water more accessible while improving efficiency and reducing the cost of delivery. Areas of potential business and government investment include:

Where is the demand for water coming from?

On a global basis, 70% of water is used for agriculture irrigation, 22% is used for industries, and 8% is used by households. Wealthier countries dedicate a greater percentage of water to industrial use, while low- and middle-income countries devote more to agriculture.4 The United States consumes the most water per capita, and while water use typically grows as national incomes rise, at some point it levels off as people begin to conserve.

More water goes to industrial use as incomes rise 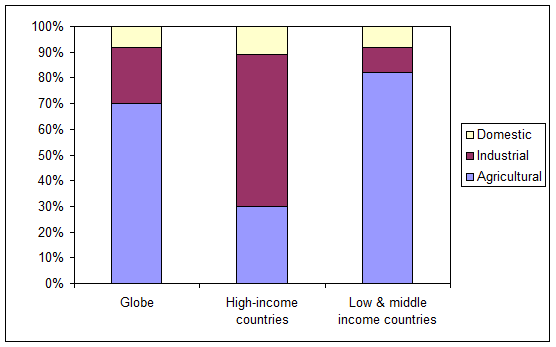 A number of trends could support future demand for water:

Total annual water use per capita 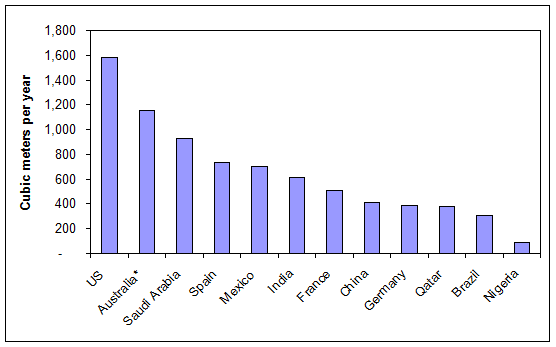 What are possible downsides to water investment opportunities?

While it seems likelier that global demand for water will increase in the future, there's a chance that reduced demand or other factors could make water companies a less attractive investment target. Risks include:

The information provided here is for general informational purposes only and should not be considered an individualized recommendation or personalized investment advice. The investment strategies mentioned here may not be suitable for everyone. Each investor needs to review an investment strategy for his or her own particular situation before making any investment decision.

All expressions of opinion are subject to change without notice in reaction to shifting market, economic or geopolitical conditions. Data contained herein from third party providers is obtained from what are considered reliable sources. However, its accuracy, completeness or reliability cannot be guaranteed.

The Schwab Center for Financial Research is a division of Charles Schwab & Co., Inc.

Thumbs up / down votes are submitted voluntarily by readers and are not meant to suggest the future performance or suitability of any account type, product or service for any particular reader and may not be representative of the experience of other readers. When displayed, thumbs up / down vote counts represent whether people found the content helpful or not helpful and are not intended as a testimonial. Any written feedback or comments collected on this page will not be published. Charles Schwab & Co., Inc. may in its sole discretion re-set the vote count to zero, remove votes appearing to be generated by robots or scripts, or remove the modules used to collect feedback and votes.

Many Will Not Retire; What About You?